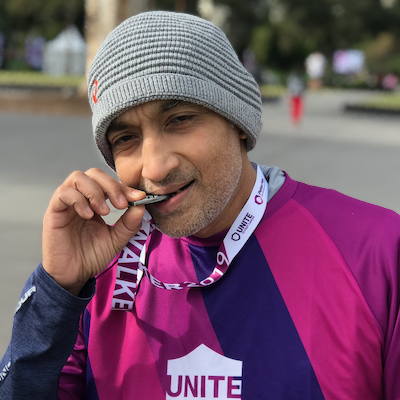 A top executive MBA in Australia offers the option to continue living and working in the gorgeous country, while earning a management education.

However, the number of internationally renowned business schools in Australia is very limited. That increases the competition for a seat in any elite Australian MBA program such as AGSM and Melbourne Business School.

Siddharth Parekh moved to Australia for his masters degree, earned his permanent residency (PR) and worked for several years before taking 6 years off to focus on his health. The fighter in him wasn’t willing to give up so easily, on either his health or his career.

He not only battled to get his health back on track, but also decided to compete for an executive MBA degree at the best business schools in Australia. We salute his grit and determination!

Executive MBA in Australia after career gap of 6 years

My experience with MBA Crystal Ball (MCB) has been remarkable.

I had apprehensions and reservations in connecting with any MBA admission consulting firms as I believed I would be able to manage the application process by myself. They proved me wrong.

My experience with MCB helped me realise the importance of having such professionals as your guides.

But before delving into that part, here’s a bit of my story.

How I got my permanent residency (PR) in Australia

I am an Australian citizen from Indian background with friends and families primarily in India (where I was born and raised), Australia and the USA.

While my most engineering batchmates travelled west, I chose to travel south; to Australia, a phenomenal country with great culture and warm people.

The best reaction to my decision was “Ahh! Didn’t you get admission in the USA?”

In 2002, after juggling between universities (in Australia and the USA), I chose to pursue Master of Engineering Science from The University of Western Australia (UWA), Perth as a research student in the field of Robotics.

I chose Perth as the UWA was the only university that offered me the course that I wanted to pursue. Besides, I was in love with this country when I had travelled a few years back.

I acquired the country’s permanent residency status while studying, which helped secure a job.

Just like any other popular destinations, Australia attracts several immigrants each year. Over some time, it has become challenging to be a resident, but I believe it is all worth the efforts and wait.

Living and working in Australia

I have had several positive memories while living and working in Australia. The country may have a slower pace than other progressive countries.

Still, it allows to have a must-needed work-life balance and offers a complete and relaxing lifestyle, which I believe are essential factors.

While the work opportunities may seem less, the work culture respects each individual and their expertise. If you strive and prove to be the best, you will survive irrespective of any circumstances.

After graduating from UWA, and with primary research on image processing, I joined the workforce as a Software Developer in the Geospatial industry. I was a busy professional who snowballed in my professional career.

I travelled to several countries for work, and I loved my job. The collection of continued successes made me a stronger and a better professional, and that was addictive.

I always wanted to acquire an MBA degree; possibly for about 12 years. I believed that being an MBA would make me a better professional and help me discover the breadth and depth of the business intricacies.

At each stage of my career, I felt that I had to wait to acquire more experience before I (re)start my study process.

After having a few years of a successful career, I took a voluntary break from my job due to extreme health reasons.

I was the lucky one who was detected with T-Cell Acute Lymphoblastic Leukemia (T-Cell ALL) in December 2013 and in August 2017.

The continuous treatment and the bone-marrow transplant in December 2017 weakened me, restricting me to work or study full-time.

I took over 6 years to feel more confident to work full-time or study further. At several stages in the last six years, the medical professionals (in India and Australia) advised me to have a slow (re)start to my career.

During my medical treatment, I worked for myself as a part-time product consultant to several start-ups. Besides, I undertook a few projects on software development.

The phase of the last six years challenged me on various areas in communicating with stakeholders, acquiring projects, influencing on the recommendations, executing business development strategies, and interacting with several professionals from multiple industries.

I had to wear several hats on different occasions.

Why executive MBA in Australia

The slow health and career progress, and several similar experiences motivated me to adopt an alternative route; to study.

In April 2020, researching a few universities and reading a few blogs and stories reignited my passion for studying further.

On further investigations and contemplation over the courses, I decided to pursue an MBA degree; another option was acquiring a Master of Applied Econometrics, which was equally exciting to me.

I chose to study as a part-time student as I believed that full-time studies would possibly be too stressful for me, and that will not allow me to work in tandem with my studies.

Ultimately, my primary reason for studying was to learn and apply my knowledge straightaway; to my day-to-day activities and my on-going work.

I discussed my future goals with a few friends and family. These deliberations strengthened my aspiration to pursue an Executive MBA degree; as the learnings and offerings would enable me to network with executives and professionals from varied industries.

Despite having more recognised universities in other countries, choosing Australian universities as a priority was a natural choice for me, one of the primary reasons being my long-term aim to be in Australia.

Most of the local universities were offering an option to be an exchange student as part of the studies. For these and other personal reasons, I was not too excited to travel overseas for studying the entire program.

In July 2020, a month after submitting my application, I received an unsuccessful result for the Executive MBA application at the Melbourne Business School (MBS), University of Melbourne.

Considering I was very confident in securing the admission, the negative response devastated me.

After two days, I regrouped myself and started working on the application at the Australian Graduate School of Management (part of the Business School at The University of New South Wales).

The application process was delayed by three weeks, letting me prepare my application and submit by 17th August 2020.

I recreated my application documents; the personal statements and my resume based on the application guidelines; provided by AGSM.

In the meantime, I was researching on AGSM (in comparison to MBS) when I came across a story dated March 2020 of Kinshuk Verma; a successful EMBA candidate at Melbourne Business School.

The story inspired me to investigate further on MBA Crystal Ball.

An engaging video on MBA in Australia by Sameer Kamat and the detailed description on their website motivated me to send them a query, despite me having some reservations in engaging an MBA admission consultant.

To my surprise, Manish Gupta (MG as he’s known) responded in less than an hour, where I was expecting a turnaround time of 1-2 days. His quick responses and further readings on their website helped me strengthen my decision to engage MCB for my MBA application process.

Interactions with Manish encouraged me to confirm the engagement on the same day.

I believed I had much time as I had prepared the first version of the documents (resume, personal statements and recommendation letters). Manish corrected me that I will take some additional days to achieve the optimum result.

I started communicating with Shantanu Joshi, who was my point of contact at MCB, for preparing my application.

The start was slow, which made me nervous as I wanted to submit sooner. Shantanu comforted me that we shall work in improving the application and will be able to submit by the deadline of 17th August.

Initially, I was skeptical as I believed I was well-prepared and organised with my documents. Shantanu highlighted the gaps and influenced me to rework on my application if I were to have a smoother ride in securing admission.

I was overwhelmed in receiving recommendations on most of my documents.

For the next one week, Shantanu assisted me in preparing a more robust application by helping me deliver the same message in an impactful and persuasive language. He comforted me to be expressive on my slow career progress, my medical condition and the fact that I was a cancer survivor.

My decision in engaging with MBA Crystal Ball was very comforting, as I felt better prepared and more confident.

Initially, I planned to work by myself and felt ready with my application paperwork.

However, the valuable insights did help me understand the improvements I required for an MBA application. The personal statements and the resume read much better to what I had prepared before our engagement.

During the early days, I expected the overall work to accomplish sooner in a few days. After communicating with Shantanu over days, I realised that the wait and efforts were worth it. It was these days of dedicated and supervised interactions that led to a polished product! The entire process was enjoyable and inspiring.

AGSM accepted my application and allowed me with an opportunity to rebuild myself. Based on the past weeks’ interaction with the staff and learning with cohorts, I can say confidently that I ended up as the best decision to be studying at AGSM.

So here I am; an aspiring MBA candidate to graduate from AGSM in the year 2023.