The Executive MBA has risen as a popular and a visibly lucrative cousin of MBA. It has become a sure-shot, albeit expensive, tool towards career advancement. With a few years of managerial experience under your belt, an EMBA provides a perfect opportunity to grow functionally, without the expense of leaving your current job and position (Read Executive MBA vs MBA for Executives – The big Indian confusion). In fact, a lot of EMBA candidates are sponsored by their current companies, with the expectation of expertise and functional returns to the organizations upon their graduation.

In this article, we will take a sneak peek at the salary outcome of gaining an EMBA degree. How they average at the various top schools across the various continents, and what kind of student satisfaction levels, does this degree render.

How do Executive MBA graduates rate their experience?

1,100 business programs, across the globe, surveyed among nearly 15,000 alumni shared their experience in the GMAC Alumni Perspective Report of 2017.

According to the report, the value proposition of an EMBA degree was rated an “outstanding” merit by 38% alumni. 45%, and 13%, alumni rated it at “excellent” and “good”, respectively. The rest 4% gave it a less than enthusiastic “fair” or “poor” rating.

A comparison with a full-time MBA degree is shown below. The inset shares the alumni perspectives on how rewarding the degree was to them. Among the surveyed, most alumni considered an EMBA to be personally rewarding (96%) while an equally impressive credit was given to the extent of professional and financial rewards. Read Is an Executive MBA(EMBA) worth it? 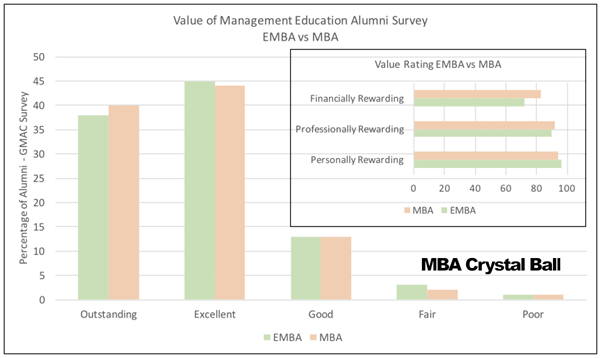 What is the salary outcome of EMBA graduates?

According to the 2017 EMBA Council Student Exit Benchmarking Survey, among over 2,300 students from 77 EMBA Programs, graduates claimed a 14.1% increase in compensation, including pay and bonuses.

Since a large number of students, in EMBA programs, are sponsored by their corporations (~55% among the surveyed), a measure of success also comes from the career advancement upon graduation, within the organization. 41% reported a promotion while 52% reported increased responsibilities.

The image, below, shows a survey of Weekend EMBA alumni who graduated between 1985-2016, from Duke’s Fuqua School of Business. It represents the typical career progression from a position of Analysts, or Managers, before entering the program (two-thirds or 65%) to an advanced position, today, as a Director, Vice President or C-Suite Executive (two thirds or 64%). 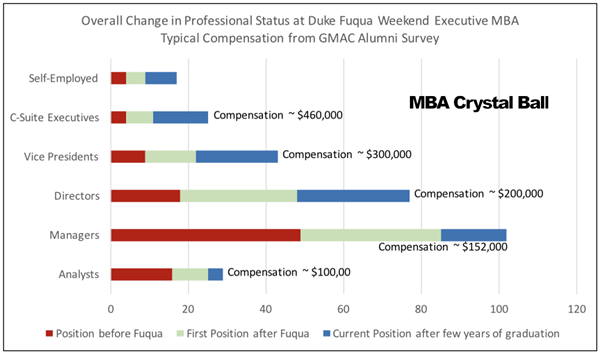 The prospective salary increases and promotions combined with the edge gained by both businesses and students, in staying ahead in the business landscape, render EMBAs a competitive advantage.


What are the average salaries of EMBA graduates in the world?

We have compiled a list of a few representative top EMBA programs. Most have been featured on the Economist and Financial Times’ Executive MBA Rankings, in recent years. We have noted the tuition fees, given the usual high cost of education, and compared the pre and post EMBA (obtained from the above sources) salaries against the price tag.

A rough estimate of the payback period (based on an approximate 10% cut from the annual salary) reflects the time it would take to achieve a full ROI on the degree.

Here are the numbers and the respective geographical breakdowns.

Also read Why study in Australia

The lists, above, are not a reflection of rankings. Rather they represent some of the well-known Executive MBA programs in the region specified.

The salaries, obtained from the Economist and Financial Times, are also representative averages taken over a period of three years. The range of occupations, industries, and pursuits, are clearly not visible in here since EMBA programs usually cater to experienced professionals who are already employed.

For more information, we would like to redirect you to the following articles for a deeper clarity on the subject.