Vijay Govindarajan, Professor of International Business at the Tuck School of Business at Dartmouth College, is one of the most influential business thinkers of our times (number 3 on the Thinkers 50 ranking).

His ideas on innovation and strategy have gained worldwide recognition and respect. Reverse innovation – his most recent contribution to the world of strategy and innovation – has been hailed by Harvard Business Review as one of the top 10 ideas of the decade.

Sameer Kamat, founder of MBA Crystal Ball, caught up with Vijay Govindarajan (VG) to find out more about his book on reverse innovation. 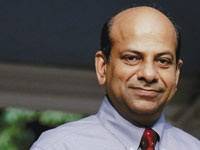 So, what exactly is Reverse Innovation? VG explained the idea to us in simple terms “Historically multinationals innovated in rich countries and sold those products in poor countries. Reverse innovation is doing exactly the opposite. It is about innovating in poor countries and selling those products in rich countries.” Conceptually that might sound simple, but the real power of an idea such as this can only be unleashed when it is implemented in the right manner.

In his book, VG talks about the difference between ‘value for money’ and ‘value for many’. He mentioned that this concept was first introduced by Dr. Mashelkar and elaborated its meaning – “Value for many is about doing more with less, for more people. This is about frugal thinking.” In the developed world, where resources are available in plenty, re-thinking the innovation game and adding frugality to the mix can be a real challenge.

We asked VG specifically about India and if he saw any (industries / sectors that were prime candidates for reverse innovation and if he thought the idea may not be relevant in certain sectors or situation. VG said – “The concept applies to all sectors — be it manufacturing, consumer goods, services, high technology, transportation, etc.” He added that he saw immense potential in health care, education, and energy.

During his India trip, VG met the Indian Prime Minister Manmohan Singh to discuss about the book and how India could use reverse innovation to make a bigger impact on the global business environment.

Many of the examples cited in the book involve the big, established companies (Tata, Suzlon, Lenovo). What does it mean for smaller local companies? “Reverse innovation is an ideal strategy for local firms in emerging markets,” VG opines. For the more agile and ambitious players who are current operating on a smaller scale, adopting reverse innovation principles, can help them play a bigger role on the global platform and open up new markets as well.

Though the idea is aimed at companies in the developed world, would it have a greater impact if these companies start collaborating proactively with organisations in the developing countries to make the opportunity identification and (positive) exploitation process more efficient? “Absolutely,” says VG. “Rich world companies should collaborate with emerging market firms.”

VG completed his doctorate and MBA with distinction (Dean’s list honor) from Harvard Business School. He has taught at Harvard (HBS), INSEAD and the Indian Institute of Management, Ahmedabad (IIMA). And considering MBA Crystal Ball is primarily an MBA platform, we couldn’t resist the urge to ask VG if he had any suggestions for prospective and current MBA students reading this interview. Apart from the education they’d get from the classrooms, what can MBA students do to prepare themselves for the rapidly evolving business world? VG recommends – “MBAs should become curious about customer problems in poor countries. The starting point is to have humility.”