What is vertical integration?

Vertical integration is a competitive strategy by which a company takes complete control over one or more stages in the production or distribution of a product. It is covered in business courses such as the MBA and MiM degrees.

A classic example is that of the Carnegie Steel Company, which not only bought iron mines to ensure the supply of the raw material but also took over railroads to strengthen the distribution of the final product. The strategy helped Carnegie produce cheaper steel, and empowered it in the marketplace.

What is horizontal integration?

In simpler terms, horizontal integration is the acquisition of a related business: a fast-food restaurant chain merging with a similar business in another country to gain a foothold in foreign markets.

As we have seen, vertical integration integrates a company with the units supplying raw materials to it (backward integration), or with the distribution channels that carry its products to the end-consumers (forward integration).

For example, a supermarket may acquire control of farms to ensure supply of fresh vegetables (backward integration) or may buy vehicles to smoothen the distribution of its products (forward integration).

A car manufacturer may acquire tyre and electrical-component factories (backward integration) or open its own showrooms to sell its vehicle models or provide after-sales service (forward integration). 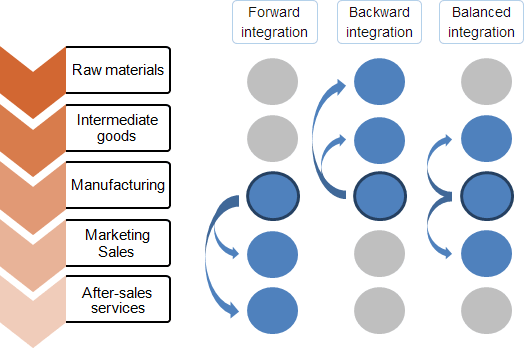 When is vertical integration attractive for a business?

Several factors affect the decision-making that goes into backward and forward integration. A company may go in for these strategies in the following scenarios:

What are the benefits of vertical integration? Let us take the example of a car manufacturer implementing this strategy. This company can

But what is the downside? What are the drawbacks of vertical integration? Let us see the main disadvantages.

However, there are alternatives to vertical integration, such as purchases from the market (of tyres, for example) and short- and long-term contracts (for showrooms and with service stations, for example).

Horizontal integration, as we have seen, is a company’s acquisition of a similar or a competitive business—it may acquire, but it may also merge with or takeover, another company to strengthen itself—to grow in size or capacity, to achieve economies of scale or product uniqueness, to reduce competition and risks, to increase markets, or to enter new markets.

Quick examples of horizontal expansion are Standard Oil’s acquisition of about 40 other refineries and the acquisition of Arcelor by Mittal Steel and that of Compaq by HP. 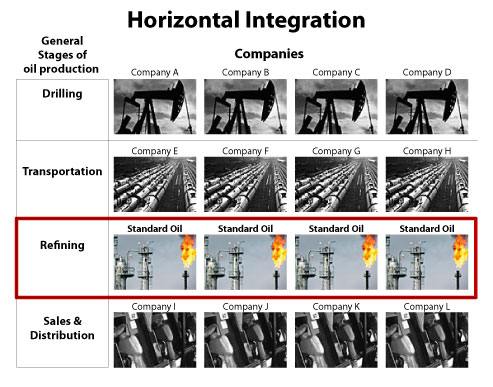 When is horizontal integration attractive for a business?

A company can think of acquisitions and mergers for horizontal integration in the following situations:

The advantages of horizontal integration are economies of scale, increased differentiation (more features that distinguish it from its competitors), increased market power, and the ability to capture new markets.

As touched upon earlier, the management of a company should be able to handle the bigger organisation efficiently if the advantages of horizontal integration are to be realised.

The legal ramifications will have to be studied as there are strict anti-monopoly laws in many countries: if the merged entity threatens to oust competitors from the market, these laws will be used against it.

Standard Oil, which was seen as a powerful conglomerate brooking no competition, was split up into over 30 competing companies in an anti-trust case.

As a company grows bigger with horizontal integration, it might become too rigid, and its procedures and practices may become unfriendly to change. This could prove dangerous to it.

Moreover, synergies between companies that may have been predicted may prove elusive or non-existent (for example, the failed horizontal integration of hardware and software companies merged in the expectation of “synergies” between their products).

The decision whether to employ vertical or horizontal integration has a long-term influence on the business strategy of a company.

Each company will have to choose the option more suitable to it, based on its unique place in the market and its customer value propositions. A deep analysis of its strengths and resources will help it make the right choice.

MBA Crystal Ball has the best GMAT MBA and MiM consultants to help you get into your dream university.