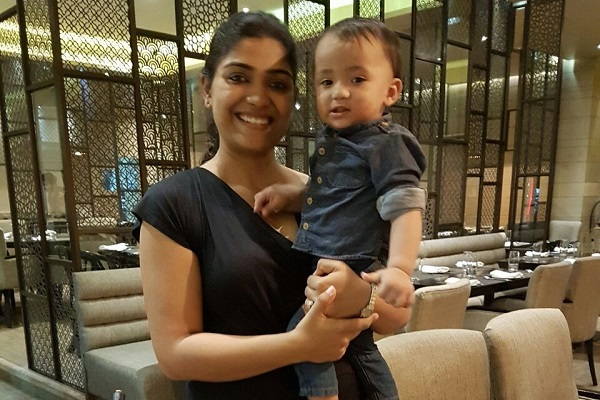 Five years after we published the story of Sudhir Nemani, who got into ISB with low GMAT score of 610, things just got a little more interesting in this family.

Lalita Peddi had joined Sudhir on campus in 2013, and got more than a glimpse of what life as an ISB student entails. Now she’s back at Gachibowli to tackle all the rigours of India’s top MBA program.

Spouse of MBA student heads back to the same business school

I graduated with a Mechanical Engineering degree in 2005. I appeared for CAT during the final year as many students do and scored an insufficient 85 percentile. I quickly caught the IT bus on campus and had a successful career starting as a Trainee to Senior Consultant/Team Manager. I saw many co-workers around me write CAT and move on to reputed institutions such as IIMs / SP Jain, but I never bothered myself with the CAT or the MBA bug again until 2013.

In 2013, my husband Sudhir Nemani applied to and got accepted to the Indian school of Business. The application process was extremely consuming with GMAT, essays (+ video essay), and detailing of the work experience. As ISB allows spouses to stay on campus, I made ISB my home for a year.

That one year stint at ISB exposed me to one of the best B schools in India. The diversity of the students they admit, their modern campus, the grind that ISBians go through, the quality of their faculty and their teaching methodologies is unparalleled in the country. I was lucky enough to be a part of it, albeit from far.

The spouses group on the campus is extremely active. ISB in its inclusiveness goes so far as to involve the spouses in all cultural events. Spouses are even allowed to attend classes with professors of repute (on request) and are encouraged to participate and contribute to the events at ISB in whatever way they can.

ISB also encourages spouses to apply for jobs at their administration block. I had the pleasure of interacting with some of the brightest and most innovative minds. Some of the spouses were entrepreneurs themselves and it was inspiring to be a part of the discussions.

But being a spouse on campus is not all that easy. The biggest change for me was the absence of Sudhir in general. It might sound very obvious, but once you get into the campus, you are forced to accept the non-availability of your partner. This is possibly the reason why MBA is notoriously known as a marriage breaker [Read why MBA causes breakup]

Sudhir could not make it to my sister’s wedding due to placements season at ISB [read more about the placement process at ISB]. To any spouse who is coming to or intends to come to ISB with their partners, I would say that you must take pride in being accommodative of your partner at ISB. After all, that is the biggest support you can offer. Personally, on Sudhir’s convocation day, I cannot remember if anyone was happier than I.

Post ISB, I watched Sudhir go from strength to strength in terms of confidence and assertiveness. I strongly believe the biggest benefit from any good MBA course is the network of friends and alumni whose role in shaping your career cannot be underestimated.

My experiences at ISB triggered a determination to apply myself but had to take a break from my work and everything else as I became a mother to a chirpy little baby boy in 2015. After 2 years of caring for my son, I decided to apply to ISB for round 1 of 2017. The mammoth task of appearing for GMAT lay ahead of me. I had been away from work for 2 years now, and from academics for more than a decade. Many women will relate to a feeling of inadequacy in such situations. This was by far the toughest hurdle to cross.

I read material from GMAT Club and I appeared for GMAT and scored 660. I wasn’t confident that applying with 660 would get me an interview call. I decided to reappear, and while I contemplated and toyed around, round 1 passed. Two months later I scored a 710 in a second attempt. This is closer to the average GMAT for ISB, so I diligently worked on my essays.

Getting essays and application right is paramount for success in getting calls from ISB like institutes. It is always a good idea to get your essays reviewed by a consultant or alumni. I had the privilege of getting my essays reviewed by an alum. I specifically remember him asking me to write my essay by the STAR (Situation-Task-Action-Result) format. This suggestion particularly came in very handy while trying to make a strong case about my achievements at work.ISB is renowned for looking at clarity of thought process both in the application and the interview.

My biggest challenge while writing my essays was I had to convince the school that this is the right time for me to take the ISB route, considering I already have 9 years of work experience behind me, and from an over represented applicant pool of IT engineers. Being a mother of a 2.5-year-old questions the ability to adjust to life of a top B school.

I must give credit to the book Behind the MBA Hype by Sameer Kamat. This book gives you rare insights about how to go about your application and essays while applying to top B-schools.

I also read some blogs on how moms in general fared at top B schools. For example, Reflections of an MBA mom with two kids by Carolyn Austring. I have also read about a group called Mothers@Booth, which supports moms while they pursue their MBA degrees at Chicago Booth.

ISB interview questions and my answers

In the ISB interview too, the duration of which was around 15 mins, I was asked questions about my shift from Mechanical to IT to which I stated that I had a few computer science courses too as part of my engineering and I liked the idea of programming. So when 3i-infotech offered a role with their rotational training program, I didn’t hesitate. I mentioned that I have done well for a non IT engineer and I don’t see how that change from Mechanical to IT wasn’t beneficial for me.

Next, I was asked why I had moved 4 companies in 9 years to which I answered that we are living in an age job promiscuity where personally I would like to be more agile. I have moved companies for the want of advancing technical skills, vertical growth and career advancement in general.

Then came why do I want to MBA now and so on. I would suggest that applicants thoroughly prepare for interviews.

ISB interviews are not stress based but you will be asked about everything they think that you did perhaps a bit differently.

Thankfully, the open mindedness and welcoming nature of interviewers and later on, of the fellow admits has assured me that accepting the admission invite for PGP 2019, where I aim to major in Strategy and Operations, is the best decision of my life.

As I gear up to begin my second year at ISB, this time as a student, I believe that I will be able to add uniqueness to class of 2019, and my colleagues will be able to appreciate the fact that they too will eventually confront the challenge of balancing their career and parental responsibilities.

I hope I will be able to challenge stereotypes at future workplaces while bringing in innovation and flexibility. Well, at-least for now ISB seems to agree with me.

Also read:
– Choosing between being a careerwoman or a housewife and mother
– Second MBA from UK without GMAT for Indian mom
– Why should an Indian mom with kids drop her MBA plans?