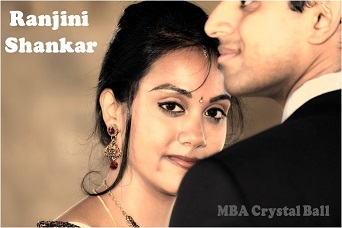 No matter what your qualifications and capabilities are, if you are a woman, the roadmap is more or less pre-defined for you. After marriage, you’d be expected to settle down. Which indirectly translates to – give up your career and take care of your husband and kids.

Ranjini Shankar takes us through her thought process as she made a difficult choice – to pursue her career aspirations after becoming a mother. And she had a rock solid supporter.

I married my husband at the age of 23. Before I met him I had toyed with the idea of quitting my job as a chemical engineer at Merck to pursue my MBA. I had wanted to move out of making process decisions and into making strategic decisions and going to business school seemed like the perfect way to do that.

But I fell in love. And I got married. I very nicely put away my thoughts of grad school and put it in the corner of my mind labeled ‘What ifs‘.

Luckily for me I married an amazing man. When I told him I planned on staying home to raise our kids he was supportive and told me I should do what was right for me. He then asked me what it was I really wanted to do and I told him how I had always wanted to be part of the decision makers in the pharmaceutical industry.

After a few minutes of silence my husband asked, “Why is it again you’re not doing this?” I told him my list of how I wanted to raise a family right and how that was what a good woman was supposed to do.

I told him how my mom had been amazing and stayed at home. How she always had dinner ready and picked us up from school. How she had always been around to help us with homework and wake us up in the morning and how I thought it was my responsibility to provide that for my children. My husband looked at me and said something I will never forget.

It was like someone had dunked me in a tub of ice water. I realized that just because society has made it such that when women go after what they want it is considered selfish and harmful for the family it doesn’t mean that it is actually true.

My mom was an amazing stay-at-home mom because she wanted to be whereas on the other hand if I had decided to be a stay-at-home mom I would have been terrible and unhappy because I didn’t want to be at home. With that realization I applied for business school thinking that the hardest part of overcoming my own fears was over. I was in for a surprise.

While my immediate family supported me completely in this decision, as soon as anyone else found out I was going back to school to pursue an MBA I was met with a mixture of shock and disappointment.

I heard statements like “On your gravestone it won’t say that you were a powerful decision maker, it’ll say you were a good wife and mom. If you go through with this, then it won’t even say that either.”

Or horror stories like “Didn’t you hear about that woman who was an executive at some big company? Her son became a drug addict and dropped out of school. Do you want to end up like that?”

While in theory I thought it would be easy to handle all of these outrageous opinions and advice it was incredibly difficult. It was difficult because it fed into my pre-existing doubts about myself and my decision to go after what I wanted.

A small part of me was convinced that they were right. Convinced that while in school and after I graduated my husband wouldn’t love me if I wasn’t home to make dinner every night.

Convinced that my son would hate me for hiring a nanny to take care of him and not making him snacks when he came back from school. I just kept repeating what my husband had said to me.

If I didn’t go after what I wanted then my children wouldn’t either and I didn’t want to let that happen.

When I got the news that I had gotten into University of Chicago’s Booth business school I was ecstatic but nothing compared to how happy my husband was.

Two days later my son was born so I took that as a sign that he approved too. With my new found confidence I was able to start pushing away all the whispers and focus on the future.

There will always be doubt as to whether I am doing the right thing or not, but I know that if I had made a different decision not only would there still be doubt but I would also have enormous regret.

I want my son to grow up and be proud that his mom followed her heart. I want him to know that it is OK to make a decision that is not fully supported if you think that it is right for you and for your family. And most importantly I want him to realize that whether a mom chooses to stay at home or go to work (or to school ) it will never change how much she loves her child.

Editor’s note: I bumped into Ranjini on Quora and found her story interesting. I asked her whether she’d be willing to share it with our readers and her modest answer was ‘I don’t think it’s impressive enough‘. And then I found a response that she had posted on the same site, which got 7500+ upvotes [edit: 20,000+ now]! Check it out here and upvote it: Who is the biggest supporter in your life

Btw, who’s the biggest supporter in your life? Give them a little tribute by sharing their story in the comments below.