“Start early” is good advice to anyone hoping to become a CEO someday. A good education is the foundation on which corner-office ambitions are built. Along with education, relevant and substantial work experience paves the path to the top job.

First, a quick look at the different demands of the CEO’s job.

A CEO supervises the finances of his/her organization; helps in problem-solving; and hires top managers, supervises them, and evaluates their performance.

He/she makes decisions related to labor, personnel, and contractors; ensures that the corporate goals are reached; gives a direction to organizational policy and strategy; and clarifies the company’s corporate vision.

If you want to become a CEO, you better get prepared to perform these weighty tasks. Not today or tomorrow, but gradually.

Which is the best degree to become a CEO?

A formal degree is important as it gives the CEO aspirant exposure to a number of disciplines, points out Investopedia.

But what degree, and from where?

One from an Ivy League school or another top-tier institution is obviously the best qualification to begin with, as it will immediately point to the candidate’s academic quality.

You need to select the degree major suitable to you, based on how relevant it would be to the industry in which you hope to shine.

For example, if you want to be the CEO of a health company someday, you will have to earn a degree in health administration.

But your academic mission would be far from over: you would have to follow up a bachelor’s degree with an MBA, carefully choosing the electives that will prepare you for healthcare.

Engineering graduates with MBAs from top-tier b-schools and excellent work experience may be hot candidates for CEO’s jobs, but they will also have to complete courses in accounting, economics, finance, and statistics.

Other bachelor’s degree holders—for example, those who majored in business or public administration or law—can rise to the top, but again, not without burning some midnight oil over economics and finance tomes.

CEOs also need to be well-versed in laws and regulations, technology tools, and human resource management, and possess excellent communication and people skills.

Undergraduate degrees in business studies and finance-related subjects equip the student with management and marketing skills and knowledge of math and statistics.

A good program would also include an internship, which would teach practical aspects of managing a business.

Most common undergrad degrees for CEOs

Engineering and business administration are the most common degrees among CEOs, and surveys have found that nearly 45 percent of Fortune 500 CEOs have majored in these two areas.

However, engineering and business majors don’t have a monopoly over CEO positions. Many CEOs have majored in computer science, history, and political science, for example.

While computer science graduates can enter all industries as all sectors use computer technology, a degree in history provides students with an informed perspective of the past, and political science makes students objective and analytical and comparative. Quite a few CEOs also hold degrees in liberal arts and public administration.

Among CEOs with “nontraditional” undergraduate degrees are Ken Chenault, CEO of American Express from 2001 to 2018, who has a degree in history; former HP CEO Carly Fiorina, who earned degrees in medieval history and philosophy from Stanford; and Robert Iger, Disney CEO, who has a communications degree from Ithaca College.

Many future CEOs enter graduate school for an advanced degree in their favorite field or for a business management degree. An MBA is a common graduate degree held by CEOs. Many MBA programs have specialized courses that improve the students’ communication and leadership skills.

Electives such as strategic management, organizational theories, and managerial economics also prepare potential CEOs. You need to pick a concentration that is relevant to the industry you have chosen.

Advanced degree courses help you keep abreast of new trends and philosophies in the world of business and industry.

They also make you a part of professional and alumni associations that improve your networking and give you vital knowledge and skills in your work environment.

What are the top MBA programs that have contributed the largest number of CEOs to Fortune 500 companies?

Twenty-six MBA programs, offered by both private and public schools, have produced Fortune 100 CEOs. Six programs have produced more than one Fortune 100 CEO, and two programs—Kellogg and HBS—five. Wharton has produced four Fortune 100 CEOs, and Booth, Stanford GSB, and Cornell Johnson two each. Two of the programs are conducted the US: IIM, Calcutta, and HEC, Paris, points out usnews.com.

But profiles of CEOs of Fortune 100 companies show that a majority of them achieved their positions without an MBA, according to a US News article published in March 2017.

According to a time.com article from 2016, 42.6 percent of Fortune 500 companies had an MBA and 18.5 percent had other master’s degrees. About 30 percent only had a bachelor’s degree.

Although Mark Zuckerberg wanted to major in psychology and computer science from Harvard University, he dropped out to go to Palo Alto to work on Facebook.

Bill Gates dropped out from Harvard University without even deciding on a major. Dell founder Michael Dell left college to pursue business.

Travis Kalanick, Uber CEO, went to study computer engineering at UCLA, but dropped out to work on Scour, a peer-to-peer search engine.

They and other business leaders show that it is not just skills learned at college that make a CEO.

True, university provides opportunities for networking and for establishing connections with other students, professors, companies, and recruiters.

Connections made in college provide invaluable resources for executives, and internships offer students a chance to gain work expertise and meet top executives.

But importantly, a CEO requires certain personality traits. He/she needs to be a good communicator, an extrovert, a strategist, and a visionary.

Jack Welch, former Chairman and CEO of GE, is an example of an extrovert, who even as a low-level engineering employee, caught the attention of his bosses for his abilities. You also need discipline, inventiveness, and analytical skills.

Many future CEOs start from lower-level management positions and work their way to the top. They are smart enough to attend corporate management training programs that come their way.

They also express their commitment to their profession and company by showing a willingness to work hard and put in long hours. In the US, many opt for voluntary certification that demonstrates knowledge and proficiency.

The best route to become CEO

To sum up, first earn a bachelor’s degree in your selected industry, in a business-related field, do an MBA or another master’s program, gain experience, and opt for voluntary certification.

After gaining experience in your industry, stick with one company for a number of years: this shows commitment. Remember, a large majority of CEOs are appointed from within organizations.

According to an article in forbes.com, originally published on INSEAD Knowledge, a combination of an engineering degree and an MBA from a top business school seems to be most likely to lead to the CEO’s position.

An MBA with a focus in marketing, HR, and corporate strategy is a good combination for someone who hopes to lead a company someday. Finance and economics are good courses, too. So also corporate and labor law.

Why is engineering special for CEOs?

Why is engineering the most common undergraduate degree among Fortune 500 CEOs? Engineers are known for their attention to detail, problem-solving ability, risk management talent, and numeracy.

Although some may lack people management and communication skills, emotional intelligence, and leadership ability, companies feel these are teachable traits.

On their part, quite a few engineers leave their main field of expertise and choose management because they want more money, they are disillusioned with their working conditions, they want to gain more self-esteem, or they want to make a difference, a survey has found. So there are more engineering candidates for the top job.

You can be the CEO of a small start-up or that of a company employing thousands of people. Whatever the size of your organization, you are likely to have to put in extended working hours, shoulder a lot of stress, and often live out of a suitcase.

Here’s a sampling of education profiles of top CEOs in US from an Investopedia article published in August 2017.

[Editor’s note: We added this section in December 2021 to include the interesting results of an online public poll we did.]

Facts, statistics and research aside, we were curious to know what practicing professionals felt about this. Which degree would they vote on, if given a choice?

We posted a survey on LinkedIn to find out which is the best degree to become a CEO – MBA, engineering, PhD. We also added a wildcard for those who didn’t believe any degree was required.

While providing the undergrad option, we specifically chose engineering (as opposed to other disciplines such as the liberal arts) as our research revealed that this degree (along with business administration) dominates the undergrad space for CEO qualifications.

Our poll received 5,142 responses from around the world.

We had assumed that the MBA degree would grab the highest share, but we were wrong. It did pretty well though with 1440 votes (28%). But it wasn’t not enough to tilt the scales in its favour.

Interestingly, 1 in 2 respondents (2612 voters, 51%) felt that the degree is irrelevant in the pursuit of the corner office. 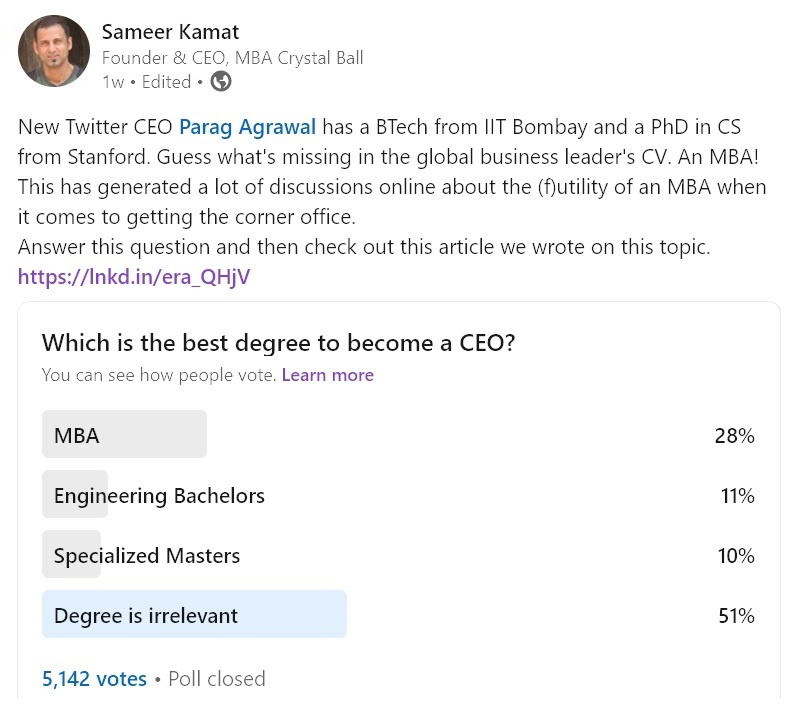 Many respondents shared their views to justify their choices and share new perspectives. We’ve collated a few interesting ones and posted them on our forum – CEO qualifications discussion.

15 thoughts on “Best degree to become a CEO”