Watch the video. And please ‘like’ it, if you find it helpful. 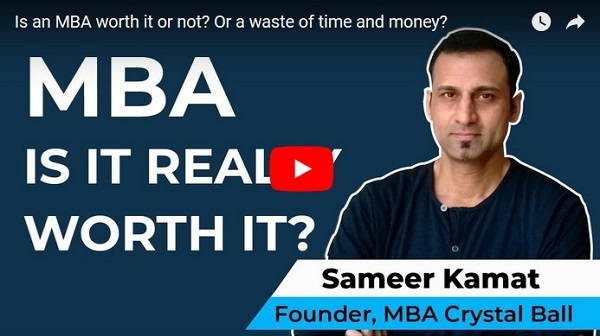 Data from the National Center for Education Statistics claims that the number of business Masters graduates have increased from 26,490, from the rotating disco ball era, to 189,000, in the flying Trump hair era. It has been increasing in popularity, in the US, and around the world, with the US bearing the brightly lit torch through the decades.


The idea of business education materialized with the first graduate school for business, the still famous Wharton School, in 1881. It was Dartmouth’s Tuck School of Management that offered the first advanced degree in business, in 1900. Harvard Business School began offering its still cherished MBA degree in 1908.

Americans were the first ones to take the largely accepted philosophy of they will figure it out on the job to advanced training in business, like other professional fields already practiced. It took about half a century for a non American business school to offer an MBA degree, in this case, at Richard Ivey School of Business at the University of Western Ontario.

In simply number of years, the US had a a generation’s head start over the rest of the world. And that experience has shown its consequence with the US still being the reigning champion of housing the top business schools across the globe.

So, if all’s well in heaven and trade, why have we embarked on this discourse?

Despite the super hero like status, there are those that claim that the pay for MBA graduates have been on a decline, and that there is now an increasing concern for the employability of the scores of MBA graduates walking among us, without the golden halo they were promised with the outcome of the degree.

In this article, we will explore what these concerns are. What, if anything, has changed between the then and now of an MBA degree?What is the possible future of an US MBA, for international students? Are US MBA degrees still a great investment? And finally to sum it all up Is an MBA, from the USA, still worth it?

Read What is the RoI of an MBA from USA?

Is an MBA from USA worth it?

What are the possible concerns of an MBA in the U.S.?

Exclusivity is a key to being extraordinary. When a thriving system of a handful of successful business schools is copied over and over to make en masse MBA programs appear around every corner, its value is bound to suffer a terrible fate.

Only 7% of the weed like ever-increasing number of low quality business programs in India and its 5,000 plus MBA graduates are employable, for instance, according to a 2016 report by the Association for Chambers of Commerce and Industry of India.

With annual revenues in the neighborhood of a few hundred millions, for some of the top business schools in the US, and with an ever increasing demand of MBA seeking applicants, worldwide, there is enough temptation to strike while the iron is hot.

As is true for many countries, USA is also plagued with less deserving graduate programs with promises way out of their league, thereby bringing down the overall reputation of the degree itself.

The popularity of INSEAD’s one year MBA format, and the ever rising status of other European, and Asian, one year MBAs have indicated a shorter, and often cheaper, alternative to the traditional two year US MBA format. The gains of the one-year MBA, from a reputed b-school, has been known to be an impressive 60-70% rise in salary. MS programs, with concentrations on various business specializations, are also in vogue.

Candidates who are aware of their specialized interests now have the option of choosing a cheaper MS in Finance, Accounting and Management, frequently from the same prestigious business schools, also sharing the same faculty.

In a 2005 HBR.org article, Distinguished Professors Warren Bennis and James O’Toole have discussed, at length, the lack of realistic practice based business training in many American business schools, including some of the top prestigious ones.

Over the past few decades the focus of the tenured faculty seems to have shifted to a scientific model with a rather unhealthy amount of inclination towards research, in specialized topics, often with very little regard to the human component of doing business. As a result the curriculum has also become irrelevant to the complexities of doing practical business.

Going past their article, and into a broader issue of how employers perceive this shortcoming, most feel the need of having to season their MBA recruits to get them to understand the business of doing business. Hence the possible resultant loss of employer’s faith in the business acumen of newly minted MBA graduates.

Before we squabble on to-may-toes or to-mah-toes and decide to call the whole MBA thing off, we should consider its merits as they are. Yes there are concerns but let’s look at some of the counterpoints that compel thousands of students to turn to an US MBA each year. It’s true that there is an inherent dynamic nature of the value of an MBA degree. Its practicality is subject to factors like the economic environment, recruiter demands, and other external influencers.

But a large part of its usefulness also depends on the candidate profiles, the classroom network, and the circumstances of the individual candidates themselves. After all there are benefits to getting an MBA just as there are reasons to doubt its usefulness.

What is the worth of an MBA in USA for International students?

The question of to do or not to do an American MBA is usually a decision borne mainly by students outside the country. International candidates still comprise a significant portion of the MBA student body, in the US. Even with the time evolution of an MBA degree, with concerns that have risen with changing tides, there are still factors that make it a constant in the functioning of organizations. So, what are the determinants that still make an US MBA a clear choice for the over 35% foreign applicants, according to the 2016 GMAC Application Trends Report.

51, out of the top 100 business schools, are American, in the list of Financial Times’ Global MBA Rankings of 2017. Other ranking bodies concur with similar numbers. What makes a difference in the whole worthy/not worthy debate is the choice of ones’ b-school while applying.

Perceptions matter. Your school, and MBA program – online, part-time, distant, etc – can have a significant impact on how much weight the degree will carry. If the choice leaves you outside the realm of the known business school elites, your decision should be based on various reviews, formal or past student’s informal report on the worthiness of the degree.

No surprise there. With the largest volume of elite business schools, it should hardly elicit a “whoa!” when told that 91% of over 950 recruiters have US MBAs in their radar. Industry wide demand for MBA is still the highest in the United States, according to the GMAC Corporate Recruiter Survey Report, released in 2017. And the trend is not lulling away.

In 2016 it was 85%. The median pay for the top b-schools, in the US, is also on the rise. Not to mention that US features as having the highest starting salaries, after an MBA (Read Average MBA Starting Salaries and Compensation Packages), with a possible 60% post MBA salary hike.

If you are seeking an international degree, a global network is probably a feature that you hold dear. With all its b-school greats and a multitude of job opportunities, it may not just be your first choice, but also that of the rest of your future batch-mates. In a case-study type learning environment, that many of the prestigious schools prescribe to, this body of intellectual peers is a major reason why good red white and blue b-schools are worth it.

These are just some of the glaring benefits. These benefits translate into exposure for your future career growth, entrepreneurial ideas, global contacts, resources and opportunities to channel those resources for your future. Whether, however, it is the worthiest choice is finally dependent on you. Read Is an MBA right for you?

So, is an American MBA right for you?

Yes, if the shoe fits. The most crucial fit is your realization of why you want to pursue an MBA. Enthusiasm is a fleeting feeling if your motivation is driven from simply landing a higher paid job. Pays can increase with time and experience as well. Unless your measure of an MBA RoI is evaluated with the eagerness to understand business tactics, external factors like economic turmoil can throw your cause into concern.

American MBAs are also a financial commitment, taking a large part of your post-MBA earnings hostage until your student-debts are paid. That consideration needs to feature in your decision with regards to the timing of your pursuit. Do you have means to support this degree? Will you be able to secure your future in case your MBA plans go amok?

All MBAs require a foresight, an investigation, motivation, intention, and a definite plan B for that which is beyond your control.

If all things are considered, the answer is a “Yes!”. USA is still the reigning leader of MBAs. The rising fame of worldwide elite MBA programs are only inspiring the reputed US MBA programs to excel snd stay in the game. And that’s a good thing. But its true worthiness is finally a matter of a match between the merit of a good MBA program and your readiness to pursue it.

‘Coz without that you are most likely to be the kind with an MBA qualification that is only worth the real estate on your resume.

Also read:
– Best MBA programs in USA
– How I got a free MBA in USA and saved 70 lakh rupees
– Problems of international students in USA and how to tackle them
– Average MBA salaries after 10 – 20 years for USA and Canadian business school grads
– Is a college degree worth the cost or not?
– Liberal arts degree worth it or useless?