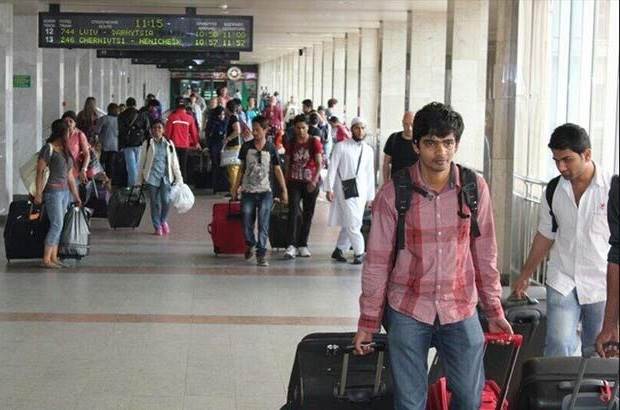 For the past 20 years, Western universities have made hay from their shining popularity among students the world over, particularly China and India. Western economies have also reaped benefits from these students staying on after graduation and joining their workforce. But now, more and more international graduates are rediscovering a taste for homemade pie, as it were, as the economy and job prospects in their countries improve and as they acquire fresh, new perspectives on life.

But the real story in those figures is that Western-educated international graduates are returning. The editor of an education portal says one reason for the increase in the number of Chinese returnees is the economic growth and improved job prospects in their home country. A few decades ago, very few Chinese returned—they saw developed countries as “heaven.” Now, China is just as good, if not better, in many ways.

According to a representative of a company that serves overseas applicants to Chinese universities, Chinese students once saw study abroad as a rare, life-changing opportunity. Now they go West more for the experience and exposure. And after graduation, it is “about turn!” for many of them.

A student counselor at Tsinghua University High School, Beijing, says Chinese students now believe that China now offers them more opportunities to develop their careers than any other country. Strong ties to family and difficulties adapting to foreign cultures are other reasons why Chinese students return home, this counselor told thepienews.com.

Good networking a ‘must’

More and more Chinese students feel it is a better idea to return to China to start a career or do an MBA than to go West. Queenie Ren, a young professional who moved to the US to study economics at Brown University, has gone back to her own country five years later and works for investment banks. Networking has become important for career development, and it is a good idea to be local, she remarked to FT.

Ren plans to study business management and decided only one school would do for her: the Cheung Kong Graduate School of Business (CKGSB) in Beijing. Why? The local business connections that the school offers give its graduates an advantage. Returning Chinese students know this fact about CKGSB: they make up 40 percent of the 50/60 students admitted to its MBA program each year.

Along with the national economy, Chinese b-schools have also recorded impressive growth in recent years and scaled the ranking lists of reputed publications. The Chinese Europe International Business School (CEIBS), for example, has moved up from rank 16 in FT’s 2016 Global MBA Rankings to 11 in 2017 and is the top Chinese b-school in the list. B-schools’ good reputations are persuading Chinese students in the West to go home for their MBA studies. But this means that Chinese graduates returning with “foreign MBAs” would now have to compete with equally competent, homegrown b-school graduates with a flair for better, localized networking.

MBA students’ plans to return to their home countries after graduation have put pressure on Western schools to improve their ties with companies in these countries to encourage them to hire more of their graduates. Realizing that a good number of its Chinese graduates are returning to their home country, the London School of Business, for example, has started to organize career fairs on its London campus, roping in alumni and hoping to build a rapport with recruiters.

What about Indian students? A reading of media reports gives the impression that new visa and immigration barriers, more than any other reason, are driving Indian students to return to their own country after graduation. The new visa regimes in Western nations have made it difficult for Indians who have graduated from these countries to stay on for jobs. Their option is to return to India. But there’s a problem. Rupee remunerations would not be adequate for repayment of b-school education loans. Dollar salaries are required.

An Indian student who studied economics along with law in Warwick, UK, hoped to find a job in economic consulting in that country. However, during his stay in the United Kingdom, the UK government revoked the two-year work permit for foreign graduates. The student had to return to India for a job in a start-up.

The risk of not being able to find a job abroad after completing their MBAs in the West has forced students to review their study-abroad plans, The Economic Times quotes an official of the World Education Service, a New York-based student and immigrant credential evaluation agency, as saying.

Not all want to stay

Obviously, a Western education and lifestyle may be “heaven” for some but not for all. A general belief about students going abroad is that they would give their right hand to be able to stay on in those countries for jobs. An academic study persuades us to question this view.

A study on international students in the US (mainly STEM—science, technology, engineering, and maths—students ), by two researchers at the University of California at Santa Barbara for the Ewing Marion Kauffman Foundation, found that though 48 percent students wished to stay on in the US after graduation, 12 percent wanted to leave, and 40 percent were undecided.

Those who wanted to return home cited family ties as the biggest motivator but also opportunities and policies that beckon them. Long and arduous immigration procedures also make students and professionals want to go back. Some others plan to return because of a sense of commitment and responsibility to their home countries and the bigger contribution they feel they would be able to make to their own societies than to their “new countries.”

Interestingly, better professional opportunities now available in their own countries also draw international students and graduates home. Technology students and entrepreneurs, for example, feel that as people in their home countries increasingly adopt high-tech in their daily lives, professional opportunities in technology are bound to grow in these countries. Moving back to their home countries is not a difficult option anymore but a smart choice.

According to the study, which stresses the loss to the United States if international STEM PhDs and postdocs leave the country and return home, China has recognized the importance of repatriating its highly educated and talented expatriates. China is implementing the Thousand Talents Program and the Thousand Young Talents Program that offer professional and financial incentives to attract returnees.

In a short documentary video on YouTube, Julia Cao, a student at the University of California, Berkeley (UCB), says many of her friends are planning to go back to China after studies. “They are more culturally involved with Chinese stuff, and they are not really used to [some] things here,” she says in the video made by CGTN/Global Watch.

Ying Hao, an electrical engineering student at Stanford University, plans to continue to study in the US for five more years before returning to China. “I share the same culture with [people in China] and I can truly realize my potential [there],” he says.

Sang Peng, President of the Beijing Overseas Study Service Association, says that because of cultural problems, including language, many Chinese find it hard to continue in the US. On the other hand, Indians, the second biggest group going to US universities, are able to manage because of their greater familiarity with the English language, he says in an interview to CCTV/CGTN.

Then there is something called the “bamboo ceiling.” Although there might be job opportunities for Asian students in the West, there is no guarantee of career advancement. Robert Zhang, also a UCB student, says many Asian employees in US companies, including those in Silicon Valley, hit the ceiling. According to him, Asians, despite being a large proportion of the workforce, are disproportionately represented in leadership positions. On the other hand, in their home countries, Western-educated returnees are treasured as free thinkers and advanced experts in their fields.
Read Value of MS degree from USA, Germany, Canada, UK, Australia for jobs in India.

Tips for international students returning to their home countries

Of course, it’s not all bouquets and bows for returnees. After the welcome party, you have to get over not only jet lag but also “reverse culture shock” and then quickly get down to the business of finding jobs. But a little preparation goes a long way, points out a blog on the University of Nottingham website. Here’s what you can do.

International students with plans to return home after graduation would do well to start preparing as soon as they arrive in their universities abroad. Make an effort to expand your contacts using social media and reach out to managers and HR departments. Include career fairs in your “must-visit” list. Explore your university’s alumni chapters in your home country online and use your university’s alumni-related services.

It is a good idea never to lose touch with economy/industry developments back home. Read online editions of newspapers and magazines. Study the recruitment cycle in your home country and understand the application process.

Be realistic about salaries that you could earn in your home country. An international degree may not automatically make you precious to a recruiter. The benefits of your study and experience abroad may become clear only eventually.

Finally, learn to deal with “reverse culture shock” by talking to others who have studied abroad and staying in touch with your old pals at your university abroad. Relax, homecoming is never too difficult.

Also read:
– H1B visa process after lottery makes it tough for Indian MBA Students
– Brexit effect on international (and Indian) students in the UK
– What is the value of a foreign MBA in India?
– Lessons from my bad Masters experience: MS in USA

6 thoughts on “More international students returning home to China, India after graduation than before”