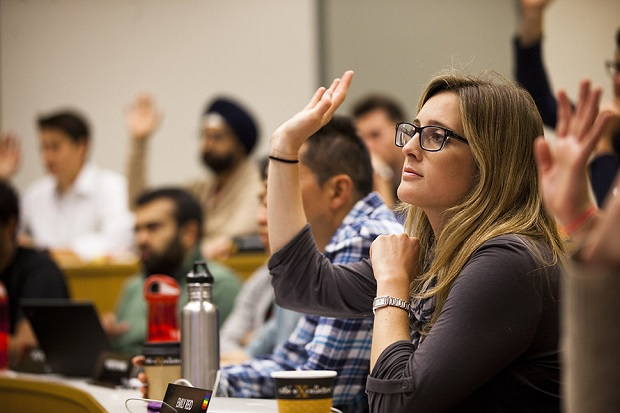 It’s become so common for MBA applicants to bunch Harvard, Stanford and Wharton together, that there’s now an acronym (HSW) to refer to the 3 without wasting too many syllables. But there are several differences across the 3 most prestigious business schools in the world.

How do the Harvard Business School (HBS), Stanford Graduate School of Business (GSB), and University of Pennsylvania’s Wharton stack up against one another? We looked at the statistics, but we also tried to see how they are different, or similar, in various aspects. Here’s what we found out.

Harvard vs Stanford vs Wharton MBA

All the three schools have more or less equal brand strength, though, outside the US, HBS may have the edge. With the increasing business opportunities in Asia, HBS holds a slight advantage in branding, particularly among international students and students planning to work outside the US. However, for MBA aspirants who plan to work in the US, GSB might be the preferred choice.

Wharton has had to counter the idea that “Harvard and Stanford are for CEOs, and Wharton is for CFOs” and that it is a mainly finance school. But it has confronted the reputation issue spiritedly by taking up a professional market research initiative. Wharton now continues to hold its own in the US and outside against its two better-known rivals.

Often, GSB’s low acceptance rate (5 percent, 2016) is put forward as an argument about its “superiority” to Harvard (11 percent) and Wharton (13 percent). However, the Harvard camp counters this by pointing to HBS’ global reputation. Whartonites can always point to a Forbes report that many, if not most, billionaires in the finance industry graduated from their school.

Rankings agencies have their own take on the standings of the three schools. Here’s how the schools fared in 2015:

The atmosphere is more mellow, more informal, and less competitive at GSB than at HBS, writes an admissions blogger. GSB has a smaller full-time student body (around 400 students) than HBS (950), which helps maintain high interaction levels between students and their peers and professors.

In some ways, GSB is less bureaucratic in its approaches. This becomes apparent from the very start to those selected. The Dean personally calls each successful applicant and gives him or her the good news a day before the official announcement.

HBS too calls, a few hours after it publishes the results online, and it is often the person who interviewed the candidate or a school alum, rather than the Dean, who makes the call. Of course, HBS is the stuff of dreams for many bright and ambitious students, and it is often impossible for those selected to choose another school over HBS.

The presence of venture-capital companies close to the GSB campus is often mentioned as one reason why students there show greater inclination toward entrepreneurship. Many of them are also keen on technology, and why wouldn’t they be, with their school located in the heart of the Silicon Valley.

Besides the salubrious entrepreneur climate, another advantage that GSB students enjoy is good weather. And they boast about it, too, when asked why they think GSB is better than HBS: “California sunshine is much more preferable to two New England winters (during the two-year MBA program)!”

Among the three university cities, Stanford’s Palo Alto has the warmest annual temperature at 21.2 degrees Centigrade, followed by Boston (HBS) at 14.8, and Philadelphia (Wharton) at 13.25. Palo Alto’s average rainfall of just 16 inches compares with Philadelphia’s 41 inches and Boston’s 44 inches. So, weather-wise, Stanford wins hands down.

Collaboration between schools under Stanford University, including its business, engineering, and design schools, helps GSB maintain a holistic approach to business education.

An admissions expert says that GSB has a more customizable curriculum than HBS. At HBS, the first-year curriculum is more rigid. HBS also almost exclusively uses the case-study method. GSB and Wharton have more flexible curricula and use a mix of teaching methods.

HBS and Wharton have larger classroom strengths (about 950 and 850, respectively) compared with GSB (about 400). But it is HBS that has unmatched academic rigor in its classrooms. Students seem more involved, and the competitiveness and peer pressure help many students perform to potential.

Dual-admits to GSB and HBS say they found the classroom atmosphere completely different in the two schools during campus visits. One of them describes attending a GSB general management class on a campus visit, and says she felt a lack of seriousness among some students. This visitor came away feeling that GSB was hardly the most studious of campuses.

However, a counterargument is that GSB students have a healthy informal relationship with professors and enjoy their study experience. Students don’t feel intimidated, and this environment is sometimes wrongly interpreted as “laid-back.”
Read Life at Wharton MBA as an international student

Of the three b-schools, GSB, among the three schools, is the most difficult to gain admission to, as the acceptance rates show. It prefers candidates with some work/business background to relatively young and inexperienced applicants. On the other hand, HBS often takes in applicants with less experience but with excellent academic and other achievements.

Among the three schools, GSB is more likely to accept applicants with a liberal arts background and from nontraditional employment sectors. However, the applicant’s fit is an important criterion.

Wharton has shown a preference for international cultural experiences among applicants. Other things being equal, strong women candidates also tend to do well during the admissions process. Career changers also feel welcome.

GSB is more likely to inspire its students to become technology entrepreneurs, while HBS and Wharton send their students to topnotch consulting companies or to Wall Street.

In view of the type of branding, HBS is perceived to have a broader placement reach, not just within the US but also outside. GSB has a West Coast-centric image, and at least some applicants appear to be concerned that they would be confined to the West if they went to GSB. Moreover, the international job market seems to have a slight preference for HBS over GSB, which is often the domestic US market’s favorite school.

So, Harvard or Stanford or Wharton: Which school is better for you?

A 2014 article in P&Q describes how an MBA aspirant and ex-employee at McKinsey, Steven Pearson, evolved 21 criteria to compare HBS and GSB, ranging from “snob factor” to alumni network. He scored both schools one to ten under each criterion and weighed each attribute according to its importance to himself.

Both schools scored nearly equal total points on Pearson’s table. But Pearson joined HBS, because it offered him a different experience—he could move to Boston from his comfort zone on West Coast. After analyzing all the science in making the choice, Pearson found that it was ultimately a matter of which school you “feel” you should go to. It is not about the best school but the school that is best for you.

It is a rare privilege to be accepted at one of the three schools named here. Very few get the green signal from both HBS and GSB: of about 4,500 applicants to both these schools annually, only 150 (3.3 percent) get admitted to both.

Not long ago, a Bloomberg BusinessWeek survey found that of a sample 63 applicants who were accepted at both HBS and GSB, 35 chose GSB and 14 chose HBS and, interestingly, an equal number, 14, opted for other schools. This last category of applicants probably found schools that was a better fit for them.

Obviously, Wharton, HBS, and GSB are all great schools. However, there is one game changer: scholarship. Financial assistance from any of the three schools may help an applicant make up his/her mind and choose one school in favor of others.

12 thoughts on “Harvard MBA vs Stanford GSB vs Wharton MBA: Which one is right for you?”