The common belief is that a masters degree (MS) is meant for students without work experience. And that’s the kind of class profile you’ll come across in many top MS programs too.

But there’s no age limit to apply for masters degrees in USA and other countries. As long as you can demonstrate your purpose and seriousness in your MS statement of purpose.

For 29-year-old Naveen Saikrishna, it was never of question of whether he was too old for a masters degree abroad. However he did think quite a bit on choosing between a Masters in SCM degree versus MBA.
(Here’s another student’s account of her decision for MBA or MS in USA at 30 after 6 years of work experience )

Never too old for a Masters degree in USA

Top MS with scholarship in third round 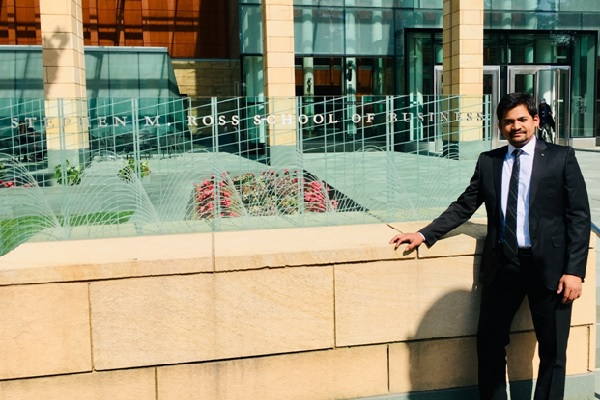 During my childhood, I used to be in the top 3 in class. I used to love Mathematics and Science.

Like most other Indian 10th standard students in India, I went on to take IIT coaching, along with the regular +1 and +2 classes, without any second thought.

I was not successful in cracking the IIT-JEE and could only manage to get into the Extended Merit List. I was quite depressed about the result.

However, as I could manage to get a good rank in the state level engineering entrance exam, I chose to join Computer Science and Engineering in one of the best engineering colleges in Coastal Andhra (Vizag).

Later, I completed my Engineering with a decent percentage, and I was already placed in TCS in 3rd year itself.

After working for 2 years in the IT industry, with the aim of studying in premier institutes such as IIMs in India, I gave the CAT exam. I couldn’t get enough percentile to get into the top 3 IIMs as a general category candidate.

I gave up the idea of taking CAT and went on to enjoy coding / programming for some time.

After gaining 3.2 years of industry experience, I joined Infosys and fortunately got my first international assignment to Belgium, where I worked with one of the top auto-mobile manufacturers in the world.

I used to work in an IT block near the huge logistics factory of the company. I was amazed to see such a large logistics warehouse.

Later, I worked for a big investment bank in London before I finally decided to go for an MBA or Masters abroad, as I felt I have gained good international exposure already.

Initially, I wanted to do a full-time two-year MBA. But at the age of 29 and with around 7 years of industry experience, I thought it would be better if I could look out for ONLY one-year courses like Masters in SCM (MSCM) or Tech MBA or one year MBA in USA.

I wanted to a strike a good balance between my quantitative skills and my natural interest towards consumer goods (reason being – I worked in our own family grocery store business in my free time).

Hence, I chose MSCM, having weighed on factors such as cost of attendance, length of the program, IT-Male-Engineer pool etc.

The added advantage is that MSCM is a STEM course unlike the MBA courses.

I was in a position in which I couldn’t dedicate time to prepare for my GMAT when I was working in London. My GMAT preparation was so irregular that I didn’t get confidence in attempting before December.

However, I gained a bit more confidence and could get 700 in my second attempt.

I used GMAT Club and signed up for Empower GMAT online course. It’s always better to prepare regularly for GMAT/GRE without having to rush at the end.

As I scheduled the GMAT just a week before the 3rd deadline, I had only around 2 weeks left to prepare the applications. I wanted to give my best shot this year, rather than re-applying next year.

Hence, I decided to reach out to an admissions consultant.

After reading very positive reviews on Quora, I wrote an email to the MBA Crystal Ball (MCB) team explaining my case and about the time-crunch situation I was in.

Manish Gupta was quick in picking up my case, and later I signed up for one school package.

MG had an hour-long call with me to get to know me and understand why I chose this course at this university.

In my first conversation itself, MG gave me a clear picture of how the application process works with MCB.

He was very open about the fact that I had to write my admission essays on my own and they would only provide their feedback by giving constructive inputs.

He even double-checked with me before I paid for their services, giving me a feel that they were not running for money.

After I spoke with him, there were many useful points about me came up that were helpful in clearing my apprehensions about the application process and in boosting my confidence.

A well-structured approach in drafting the essays made my essays look better after every successive draft.

I applied only to MSCM program at Ross.

I thought of applying to MIT SCM program, but I didn’t have much time left out to complete their application.

I chose the Ross School of Business as it is consistently ranked in top 10 in the US.

MG suggested me to approach the alumni and current students, just to make sure I learn more about the student clubs, alumni, careers etc, which would eventually help me in building my essays.

I learned so many points which are not readily available online in the school’s website.

I was invited to attend a 30-minute video interview by the admissions team at Ross. I was posed general questions related to my background, work experience, challenging situation at work etc.

I received an admit from the Ross after around 3 weeks. I was pretty happy to receive a decent amount of scholarship as well.

I accepted their offer and looking forward to their well renowned program that would help me in my career as well as grow personally in the global world.

I can’t suggest anything more than this one point out of my application experience – always start early!

And get the most out of the MBA Crystal Ball consulting team – they are helpful, passionate and truthful.

Also read:
– MIT vs Ross MSCM with scholarship: Review of 2 top SCM degrees
– Top masters in SCM admit in USA with low GMAT
– MBA after 30: Am I too old for a full-time bschool degree?

16 thoughts on “Never too old for a Masters degree, says 29-year-old IT engineer: MS in USA with scholarship”