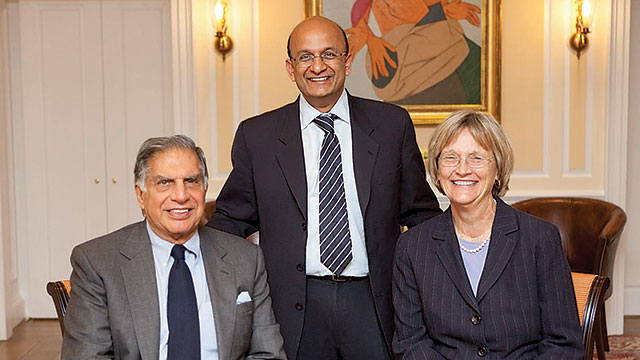 The magnificent seven-story building that houses Harvard Business School’s executive center in the northeast of the HBS campus expresses the grace and gratitude of an alumnus to his alma mater.

The donor in question: Ratan Tata, who attended an Advanced Management Program at HBS in 1975.

The donation for the building: $50 million. “Those 13 weeks were the most important time of my life in the way they transformed me and increased my perspective,” Tata said at the dedication of the building.

One could say that HBS alumni are probably more blessed with the financial resources and a giving nature than the former students of any other business school in the world. The school’s endowment crossed the one-billion-dollar mark in the late 1990s.

In 2015, its endowment fund was worth $3.3 billion, a figure bigger than the GDP of Maldives by over $250 million. [Though it’s an apple-to-orange comparison, it may give you an idea of the enormous fund size.]

HBS has some good company in the rich club. Coming closest to it is Stanford GSB, which has an endowment of $1.39 billion, nearly $2 billion less than HBS’. The only other school with a one-billion-plus endowment is University of Pennsylvania’s Wharton School of Business, which has a kitty of $1.289 billion.

Top on the list of b-schools with sub-one-billion endowments, and fourth on the overall list, is Northwestern University’s Kellogg, which has a fund of $866 million. In the fifth place is MIT’s Sloan School of Management, with $812.8 million, and in the sixth, Yale School of Management with $743 million.

Although Chicago Booth is in the seventh place overall, with $734 million, this is so only if you don’t take into account David Booth’s naming gift of $300 million in 2008, points out Poets&Quants.

How wealthy are the other top-rated b-schools? Columbia Business School, rated the sixth-best MBA program globally by FT in 2015 (and also in 2016, after INSEAD, HBS, LBS, Wharton, and Stanford GSB), has an endowment of $680.2 million (2015) and is eighth on the total endowment list and also on the endowment-per-student list with $443,705 (1,533 students).

Richest business schools in the rest of the world

The best b-schools elsewhere in the world may match the intellectual capacity of their US counterparts but not the size of their endowments.

The richest b-school outside the US is INSEAD, with $213.9 million in its kitty, which would fetch it only rank 21 if it was placed on the US list.

It would figure right after UCLA Anderson ($220.2 million) and just before Cornell Johnson ($209 million).

Raising funds seems to be an art better practiced by US b-schools than by European schools. As the MBA degree is more valued in the US, MNCs and other companies seem more ready to sponsor b-school programs.

Schools in the US are able to tap not only alumni but also corporations, sponsors, and other donors to build up their funds, whereas those in Europe are not so successful.

The result is, for European b-schools, greater dependence on government grants and tuition, which deters them from launching new programs, says P&Q, adding that educational philanthropy seems more common in the US than elsewhere.

Asian schools are also steeping up their endowment collection drives. They include HKUST Business School, ranked 14th in FT’s 2016 global rankings, the top Asian school on the list.

The school’s university, Hong Kong University of Science and Technology, has launched a campaign to increase its alumni endowment fund from $2.5 million to $3.25 million by 2017 to celebrate the university’s 25th anniversary.

In India, IIM Ahmedabad (24th on the FT 2016 global list) has collected Rs. 16 crore, or about $2.5 million (as per the then conversion rate), according to media reports from 2013. Of this, Rs. 14 crore came from alumni contributions. The fund was to be set apart for research and scholarships.

In 2015, an ISB alumnus pledged a contribution of Rs. 1.5 crore (about $230,000) to the school over three years. The Hindu Business Line reported in the same year that the ISB had raised Rs. 3.5 crore in alumni contributions over the preceding six years.

Obviously, big endowments help schools improve facilities on their campuses, adopt technology, and hire top faculty and staff. It also allows them to grant scholarships to the most talented students, and thereby attract the best applicants.

The size of endowments is also an indication of how well the alumni are doing and how obliged they feel toward their old school.

A P&Q analysis of endowment figures of 49 leading b-schools shows that their endowments have increased from $6.9 billion in 2001 to $10.3 billion in 2009 around the Great Recession to $17.2 billion in 2015. The average increase is 7.7 percent annually. The prediction is that the total endowment of b-schools will probably touch $24.3 billion by 2020.

Among the elite M7 schools, Wharton has the highest endowment growth figures of 11.4 percent since 2010, followed by Stanford GSB at 11 percent.

Of course, schools with slow endowment growth rates may either be failing in collecting funds or be using the fund for development.

How well are universities of business schools doing?

The universities of the rich b-schools are even richer. Harvard University had a treasure chest worth $37.6 billion at the end of fiscal 2015, according to US News and World Report.

Yale University (Yale SOM’s university) was second on the list, with $25.5 billion (Princeton University with $22.291 billion is next, but it needn’t be counted here as it doesn’t have a b-school), followed by Stanford University (GSB) with $22.222 billion.

Harvard University tops the list in fund collections: in 2016, it raised the highest amount among all US universities, $1.19 billion. Stanford University managed $951 million, according to a survey by the Council for Aid to Education.

Universities elsewhere in the world are no pushovers when it comes to endowments. The King Abdullah University of Science and Technology, Saudi Arabia, has an endowment of $20 billion, and the King Saud University, also in Saudi Arabia, $2.7 billion.