The United States of America has been the reigning champion for attracting international students. In 2016 alone, there were over a million students flocking in with overseas passports, looking to gain from the topmost universities (75% of the top 25 Universities in the world are American).

The other side of the coin is the story of riches to more riches on account of the financial gains made by US universities and hence the US economy.

And we are talking about big money here. Of the order of 30 some billion dollars. Read How International Students Impact the US Economy for more details. This is directly related to the amount of money students invest in education, living and other costs, on their way towards attainment of higher qualifications abroad.

And universities also gain in services and talent. A rather large number of international students are involved in research, funded by federal agencies. Universities often compete and rely on enrollment flowing in from abroad to fill in their required research talent.

International students also provide for a much cheaper, and relatively no-strings-attached relationship, in training the younger undergraduates. Much less hassle than hiring full time entry level faculties. International students themselves are offered world class resources and often tuition/scholarships towards their prized honor – the laminated degree! So, there is a symbiotic concept which has been sustaining the system for decades.

According to IIE Open Doors, the international enrollment trend has shown an unstoppable increase since the 1960s. But all the pally pal type connection is contingent on a few factors that are well beyond the control of either.

What makes USA a well traveled road is the relative ease with which the immigration system works there. The process is incredibly streamlined. A student sends the GRE or GMAT score, to the University, through the ETS or GMAC score reporting system. The application itself is largely online with the student filling in a template form, along with additional requirements like recommendation letters, Statement of Purpose, essays, proof of English proficiency and an application fee.

The finger, and toe, tapping begins after the application deadline, waiting for a yay or a nay. Universities almost always respond, whatever is the selection outcome. And the application song and dance ends with a receipt of an Immigration and Homeland security blessed document, the I 20 form, and finally the approval of an F1 Student Visa.

But why are we talking about the things you may already know? Well, ‘coz in this article we will be exploring what may be a downward spiral in the enrollment of international students, in the US, when that very streamlined process, and the immigration friendly US environment, appears to become less welcoming.

So, could there be a concern in the International Student enrollments in America?

While it is true that, at this point of time, there are no active policies threatening the status of legal immigrants, however, the mood of the current US government is clear – they are not as welcoming. Question is whether even the appearance of a possible change in policies can alter the way international students approach getting a higher degree abroad.

While the discourse, here, will tend to be strictly apolitical, we will lay out a few reasons why international students, in particular, might be going through a hmm.. moment before applying to the US. Immigration related tensions are sweeping the country, making the current, and future, status of all immigrants, including students coming in with a non-immigrant F1 visa, a little dubious. The apparent hostility, towards immigration, may play a role in discouraging university applications from foreign nations.

Also of worry are possible measures that could eliminate the student friendly OPT and raise the stakes to get an H1B Visa to work in the US (Read Future of Indian Techies and Students, in the US, tense).

These measures were originally put in place to retain deserving talent and imbibe them in the US work force. They have also been traditionally popular among students investing large sums of money to get a US degree. The probability of a dollar pay-day makes it possible for many students to borrow huge sums, for student loans, and make this expensive decision, easier.

How do we quantify if there is a possible downward spiral in international applications?

Let’s just first ask ourselves whether these are simply paranoid speculations or are we already beginning to see the effect of application refrain, this year?

We will take a look at two indicators.

Each year, ETS publishes the Test Taker Report with analysis of gender, age, region and even preference data for which graduate program, and region, the testers are interested in.

According to the report published with data gathered from July 2013 to June 2016, A Snapshot of the Individuals Who Took the GRE General Test, USA was not the preferred region of graduate study in 2015-16.  Except for Canada, the rest of the regions show an either stable or a decrease in likelihood of student preference.

While USA shows a significant loss of love as the preferred degree destination. Granted that the numbers in the US are still high enough to pale Canada’s positive leap, however, it does show a changing meter. The data, here, is inclusive of all test takers, including Americans. 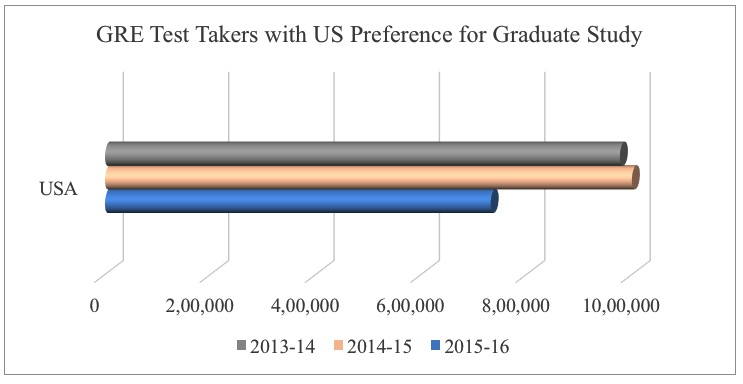 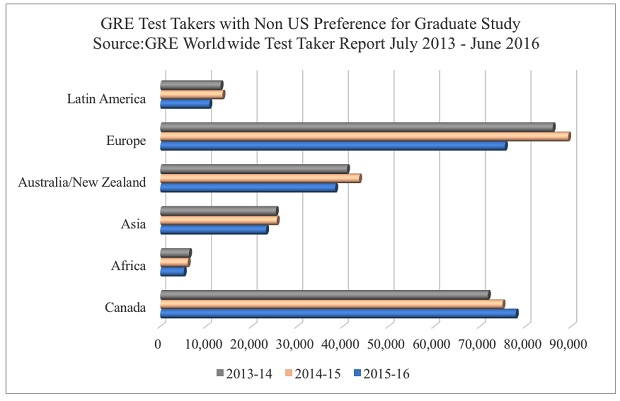 It does seem like that baton has been passed to Canada, a fact that has been independently corroborated by the 2016 ICEF i-graduate Agent Barometer report at the ICEF (International Consultants for Education and Fairs) Berlin Workshop. Canada now leads USA as the most attractive study destination in the world, as of 2016. 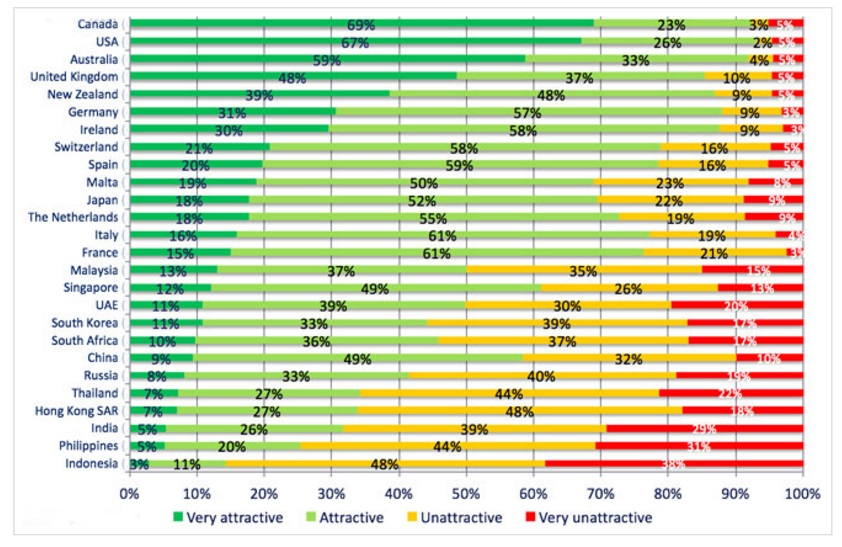 In 2014, Indian GMAT candidates sent 127,618 scores to various US universities according to the GMAT Testing Trends by Country of Citizenship. That number dropped to Indians sending a total of 109,019 scores out in 2015. While still dropping lower to 108,795 scores sent in 2016 by Indian test takers.

Adding salt to the US wounds are the decline in number of applications, this year, in the Engineering departments of US Universities. According to ScienceMag.org, data from universities, past the application deadline, has shown a fearful trend. Especially since a lot of schools heavily rely on international students.

But this year, engineering departments in schools like Vanderbilt, Purdue, University of California Irvine, Cornell have all seen a plunge in their application intake, varying between specializations. Overall, school administrators fear that there could be up to a 30% drop.

It is true that these numbers reflect the story with a rather short pool of data points (up to 3 years), but they could indicate a change of heart. It is possible that international students are simply waiting out the storm of immigration uncertainties in Trumpland. Or it could also simply be a consequence of the appeal of wild moose, maple leaves, 20 feet of snow and the pleasure of watching Justin Trudeau on prime time news everyday.

5 thoughts on “Is International Student Enrollment slowing down in the US?”