The United States of America is still the reigning champion in luring international students, of all flavors, to their promised land. The number of Indian students, in the US, is only a tad bit shy of 200,000.

With nearly 65% of those going over to get into Graduate level studies, it leads the rest of the popular destinations like Australia, Canada, and UK, in the mass exodus of prospective students each year.

Why is USA such a popular study destination for international students?

Just throwing the very best stats your way, it is easy to understand why international students, everywhere, flock in thousands to be trained and educated in some of the world’s most famous Universities. To be precise 75%, of the top 25 Universities in the world, are American.

The resources available for research and training is no small pittance. In 2016, NSF (National Science Foundation) provided over 60 billion USD for just basic and applied research, according to NCSES data.

Besides a relatively straightforward and streamlined admission process, including the application for Student Visas to the US, the process to apply and be considered for jobs is also quite convenient for international students studying there (Read OPT for job applications after graduating in the US).

According to the article on average salaries in USA, Canada and Australia, the data collected from surveys by the National Association of Colleges and Employers (NCAE) shows that the average salary of Business and Engineering MS students can be as high as over $70,000 for recent college graduates.

Plus, the fact that Indians especially enjoy the home away from home feeling with over a million sharing their roots already living there. If you are interested in getting on the US degree bandwagon, here is a helpful link to get you started – Guide to an MS degree in the US.

What about the costs of studying in the U.S.?

But with average costs for an MS degree in the neighborhood of $70,000 or INR 44 lakhs (Read Cost of MS in US ), inclusive of travel, living and tuition, it is quite a feat for most Indians. Hence students usually turn to scholarships or student loans (Read Education Loans for US).

In fact, data from IIE Open Doors (Institute of International Education) gives us a precise breakdown of the source of funding for all international students, irrespective of academic level or place of origin. As was expected, the most funding comes from personal means.

The thin green line, you can barely see, is the funding from the US Government. The more substantial US source, compared to that, is the one provided by US Universities.

The rest of almost 900 thousand received their funding from their home government, some international organization besides US, current employer, private sponsors or their families. 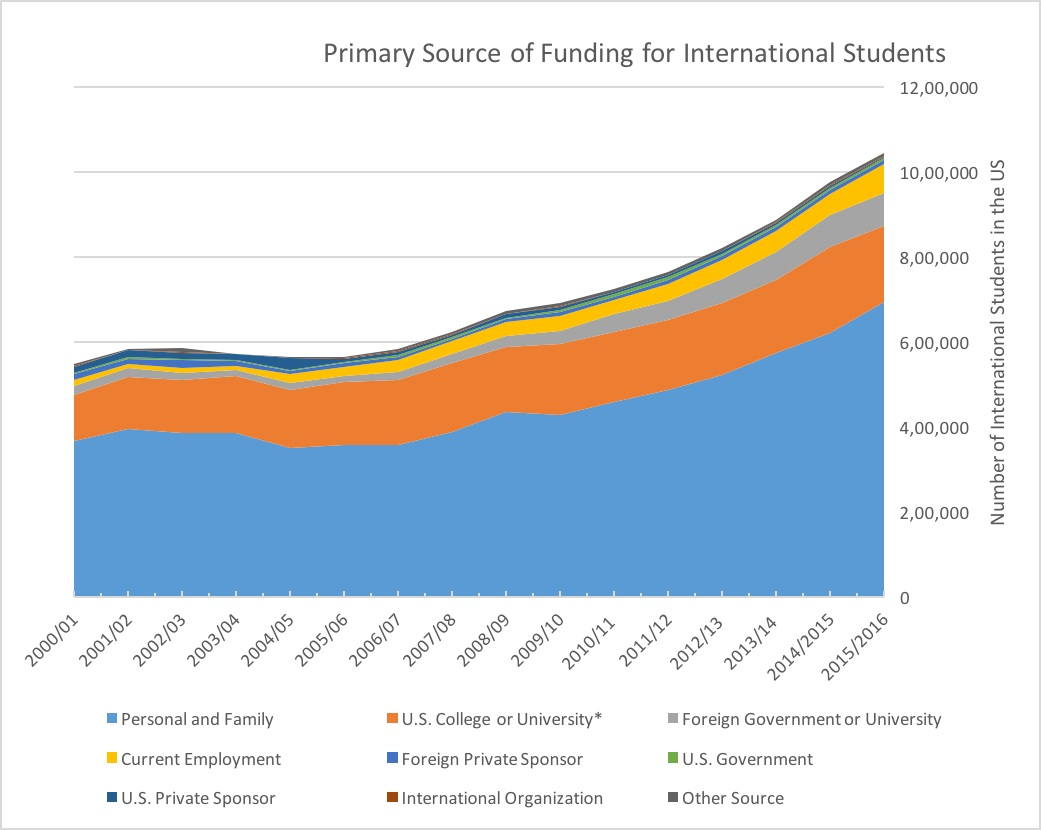 *Funding from U.S. college or universities includes teaching and research assistantships, which are often federal government research grants disbursed to the student through the institution. Source: IIE Open Doors Data

Economic impact of international students: Benefits to the U.S. economy

Why should the US Government be bothered to spend on international students at all? After all it is your education, your degree and your life that is getting improved with the global experience!

International students are not isolated from the society in terms of the living and education expenses they bring to the economic table. Something like a pot luck party where everyone brings in a dish. Only in this case, in spite of the funding and aids, provided to some of the students, their expenses in the foreign economy brings in a very positive impact.

Take the study of NAFSA.org (NAFSA: Association for International Educators) based on data gathered from IIE.org, Open Doors and Peterson’s Expenses. 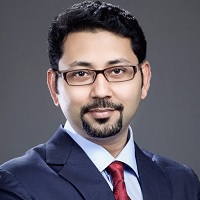 Dr. Rahul Choudaha, co-founder, interEDGE.org, a US-based organization focused on international student success, provided us his expert views on the effect foreign students had on US Universities during the recession in 2007/08. He said and we quote, “As an outcome of the recession of 2007/08, many higher education institutions in the US suffered serious budget cuts. International students contribution in terms of direct tuition fee turned out to be a very important support for many institutions. Many universities also increased the tuition for international students at a rapid rate after the recession. For example, according to the analysis of ten leading public universities, between 2007/08 and 2014/15, average non-resident tuition increased by 29% and the total estimated revenue from non-resident tuition increased by 127% to reach U.S. $2.3 billion.

In addition to direction financial contributions, several other spill-over effects in terms of job creation, consumption, diversity, and innovation are difficult to measure but critical to recognize as contributions of international students.”

In fact, according to data gathered from IIE Open Doors and NCES.ed.gov (National Center for Education Statistics), the funding provided to international students, by US sources, is about 30-40% of the total gains from them.

So what did we learn?

And here are the numbers for you to find how loud? 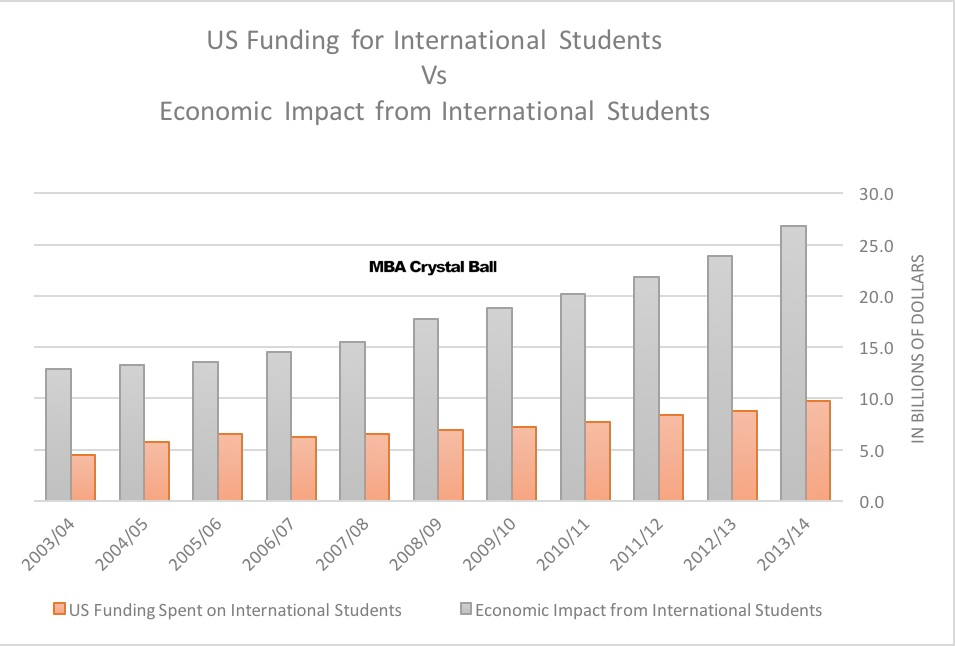 Having international students brings in a lot more to the country than just a diverse student body. This is why global education is becoming so much more popular with each passing year. With growing buying power, the rest of the world is becoming that much more capable of boosting the US economy.

That’s the story of funding, foreign students and economy. They all lived happily ever after – the US economy more so than the rest. American B-school’s love-hate relationship with international students