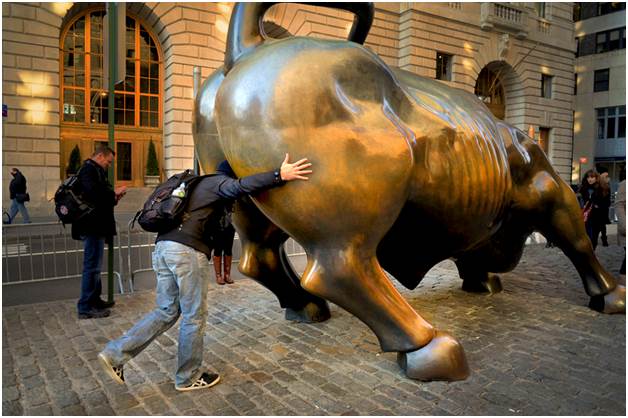 What is it about Wall Street that turns well-educated men into a$$holes?

It’s no secret that the world of high finance is one of the most offensive working environments for women. As for women on Wall Street, well, some say you have to be almost masochistic to choose a career where sexual harassment comes with the territory.

What is it about this career path that brings out the worst in men, especially towards their female colleagues? Drawing parallels between chasing big bucks and hunting game, experts believe that the high stakes on Wall Street turn men into evolutionary throwbacks.

In both cases, fuelled by rising testosterone levels, they are intoxicated by the thrill of the chase. Money has a way of appealing to our base nature, and in this case, the bigger the bucks, the better the game and the more beastly the hunter.

It’s a territorial thing, it’s a chauvinistic thing. And it’s way out of line. Whether riding the rush in the trading ring or hiding the beast in a pin-stripe suit at a hedge fund, the rules are the same – women have no place in this all-male domain, or so the guys seem to believe.

To a large extent, the ‘hunters of Wall Street’ have succeeded in using their locker room culture to safeguard what they perceive as ‘their territory’. When not making money, they are debasing and humiliating their female colleagues. Constantly.

Often, the abuse starts at the interview stage, where women applicants are asked whether they are married, whether they have plans to marry and, if so, to promise never to have children.

Oftentimes, male bosses question a female subordinate’s ‘commitment to the job’, which is code for marriage and babies.

Not infrequently, male colleagues refer to hiring women as an exercise in ‘beautifying’ the office, or, as John LeFevre mentions in his book Straight To Hell: True Tales of Deviance, Debauchery, And Billion-Dollar Deals, women are treated like ‘tethered goats’. He’s referring to the practice of taking along attractive women subordinates or colleagues to business meetings as ‘eye candy’. Sometimes, clients even request that a specific female colleague be ‘brought along’ to meetings or drinks, he reveals.

A former investment banker, LeFevre points out that the work environment in finance is overtly exclusionary. Male colleagues bond with each other, their superiors and with clients over drinks or during social activities that are not conducive to women.

This kind of bonding often results in some great opportunities, plum deals, lucrative accounts and promotions, leaving their female counterparts at a huge disadvantage. Obviously, this has nothing to do with merit or talent and everything to do with being part of the boys’ club.

What is even more outrageous is that the women who still want to make it on Wall Street, despite the overwhelmingly hostile environment, are forced to sign the U4, an arbitration agreement that binds an employee to settle any job dispute with her employer in-house.

This is almost a no-win for a woman at the receiving end of sexual harassment or gender discrimination because the arbitrators who preside over these proceedings, should a woman be brave enough to file a complaint, usually rule in favour of the financial institution.

In fact, Sherry points out, two of every three such cases are decided in Wall Street’s favor, acting as a further deterrent for women wanting to file complaints. Then, making sure they are gagged and bound, the agreement stipulates that the complainant must bear half the arbitration costs, which could run into thousands of dollars!

The final nail in the coffin that makes sure a female employee is gagged, bound and cornered is that she is also forced to waive her right to participate in class action suits alleging gender bias. Non-disclosure agreements and other draconian legal provisions make sure that what happens on Wall Street, stays on Wall Street.

So what does a woman gain by trading in her self-respect and dignity for a career on Wall Street?

Ironically, the ‘work experience’ is the biggest payoff because the money, although good, sure as hell isn’t anywhere near what her male colleagues are making. Like every other survey of MBA gads and their remuneration, a 2015 survey conducted by Bloomberg Businessweek found that women MBAs working in finance, earned an average $53,200 less than men, a year.

The disparity remained regardless of the kind of job they held – women in marketing at a bank earned $7,000 less than men while women investment bankers earned $115,000 less than their male colleagues.

It doesn’t look like the ‘bull-pen’ mentality is about to change any time soon but that does not mean women should not stand up for their rights every chance they get. Remember Muriel Siebert, widely known as the ‘first lady of Wall Street’? Siebert was the first woman to buy a seat on the New York Stock Exchange and the first woman to head one of the exchange’s member firms – and she barrelled through this male-dominated domain with grit and grace.

Amazingly, every step she took for herself was also a step forward for women, even if it meant sticking her head in a loo! Some may recall how Siebert got the chairman of the New York Stock Exchange to build a toilet on the seventh floor of the exchange, no mean feat back in 1987. Under the threat of having Siebert install a portable toilet there, he promptly gave in, saving women employees a long trek down a flight of stairs.

Legends like Siebert come along only once in a lifetime but there are many others raising a war cry. Among them is Sallie Krawcheck, once a high-ranking executive with Bank of America and Citigroup. In 2013, Krawcheck took a bold leap and bought 85 Broads (renamed ‘Ellevate’), a global women’s networking organisation that helps high-powered women connect with and mentor other women.

Putting her money where her mouth is, she said that networking and mentorship is the “unspoken secret to success” on Wall Street. “I believe we’re at a tipping point of women’s engagement in the economy. Our community’s ability to play an important role in that is exciting, as we move from advocacy of women to the smart business of real investment in women,” she remarked.
Siebert would have called that ‘one giant step for womankind’.