Sudershan ‘Suds’ Tirumala (Regional Director, Tuck School of Business at Dartmouth), shares tips on what you should and shouldn’t do during MBA interviews – whether it’s in person or over Skype.

Tips for In-person and Skype interviews 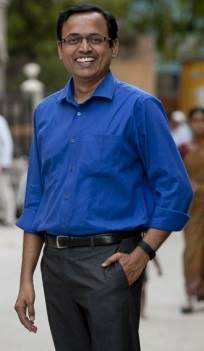 This is a biggie. And I cannot emphasize it enough. I have conducted scores of interviews of Indian candidates who have applied for admission to the Tuck School – both in person and over Skype – and I wanted to make sure I alert the applicant community on how to approach a business school interview.

You have worked so hard, spent so much time and money giving GMAT, getting a good score, and then taking the effort to submit stellar applications to the business schools you are targeting. I say stellar because if they weren’t stellar, you wouldn’t have got that coveted interview call to begin with.

You’re thrilled, knowing you’re just one step away from getting admitted to the MBA program of your choice. You prepare day in and day out, do all kinds of research on the school, getting all sorts of insights from online forums, and preparing your speech, answers for possible questions – essentially, leaving no stone unturned to make the best impression you possibly can, put the best foot forward, so to speak.

After doing all this ground work, it breaks my heart to see applicants fritter away everything by making silly mistakes – I prefer to call them strategic lapses of judgment – which ultimately doesn’t lead to the outcome that’s so desired by the candidate.

And the following advice is not specific to me being the interviewer. These things hold good no matter who is interviewing you. If I’m stating something below, it’s because I’ve seen it happen in the interview and the outcome as a result isn’t favorable to the candidate, in spite of all the hard work they’ve done up until that point.

The following are applicable no matter whether it’s an in-person interview or a Skype interview.

It reflects poorly on you if you’re late to an interview. If the circumstances are beyond your control (flight delay/traffic etc.), make sure you give a heads up to the interviewer so it’s not a mark against you even before the interview begins.

Ideally, you should have planned ahead, but in case of an exigency, don’t forget to show minimum courtesy to the interviewer.

Male and female candidates appearing for an interview need to be dressed in business attire – present yourself as a professional.

Would a male candidate go without a tie to a job interview? Would a female candidate wear smart casuals or semi-formals for a formal event?

Then why not dress appropriately for business school interview, which is no different from a job interview or a formal event? First impression is the best impression. And if you don’t get it right at the outset, things may not go as you expect.

3. Have a good body language

Don’t slouch in the chair, don’t shake your legs randomly while sitting, don’t remove your coat before sitting, shake hands firmly, and be aware that everything matters.

Needless to say, Indian applicants I’ve talked to, have done all these and more while interviewing and they didn’t do themselves any favor by doing so.

Eye contact is a proxy for confidence. When your eyes wander or don’t focus on the person in front of you, that makes it seem like you’re not sure of what you’re saying or that you’re not comfortable in your shoes.

When being asked a question or when answering the question, have adequate eye contact to demonstrate that you’re totally into the conversation that’s unfolding.

5. Don’t talk about how smart you are

Yes, you may be good, and people around you must have told you so, but for you to keep talking about how intelligent you are in an interview doesn’t bode well for the outcome.

The interviewer may conclude you’re very self-focused, and are not able to empathize with others. Such conclusion almost always doesn’t lead to a positive impression of your team skills. Let your actions speak for yourself.

6. Strike up a conversation

An interview is an opportunity to showcase the best about you, so don’t let it devolve into a just another question and answer session. Get into a conversational mode and engage the interviewer.

7. Please, no crying in an interview

Every interview is a learning experience for me, and I have always prided myself in the fact that my interviews are the antithesis of anything remotely stressful.

But imagine the stress I had to go through when a candidate started crying in the middle of a conversation – and the reason had nothing to do with the interview! Casts a question on the candidate’s ability to focus on the job on hand as well as the candidate’s emotional maturity.

1. Be aware of your visual background

It’s a competitive pool out there, so why would you want to get on Skype without paying attention to what’s behind you the interviewer can see? I’ve seen open bathroom doors, open closets stuffed with clothes, generally unkempt surroundings – I can go on and on.

The idea is not so much about this being a negative, but about how it takes the sheen away from an otherwise excellent interview.

Ultimately, when you’re being compared to the broader applicant pool and there’s someone else with identical or close to identical profile who paid attention to what’s behind them, guess who’s going to make a more positive impression?

Absolute no, no. This is by far, the biggest problem – almost an affliction – among Indian interview candidates. They think having notes on the table doesn’t hurt since the interviewer can’t see them because the camera is panning at the candidate and not at the desk.

I really can’t make any sense of why a candidate would have notes around them during an interview. Would you do that when you’re having an in-person interview? I hope not! If that’s the case, why would you do it in a Skype interview?

It doesn’t seem like much, but looking at notes even once during the interview, invariably turns into a look-at-notes-all-the-time extravaganza, and ultimately reflects you in poor light and demonstrates a lack of judgment.

3. Having other people in the room

It’s not a distraction for the interviewer as much as it is for the candidate. I’ve heard giggles in the same room while I’m on Skype with the candidate.

I’ve seen candidates smile – almost laugh – inexplicably while they’re looking away from the screen (and I’m forced to make the assumption that they’re paying attention to someone else in the room) since the conversation we’re having is decidedly not funny.

Why are you playing against yourself after having come all the way to the interview stage?

It pays to be attentive. My simple advice to candidates: Think of a business school interview as a job interview. If you’re going to behave in a certain manner to make the best impression in a job interview, why would you do things any differently in an MBA interview? Follow this thumb rule and you should be fine. Good luck!

Also read,
– Difficult MBA interview questions and answer tips for some tough, tricky and hard ones
– My horrifying and stressful MBA interview experience
– Tell Me About Yourself: How to answer