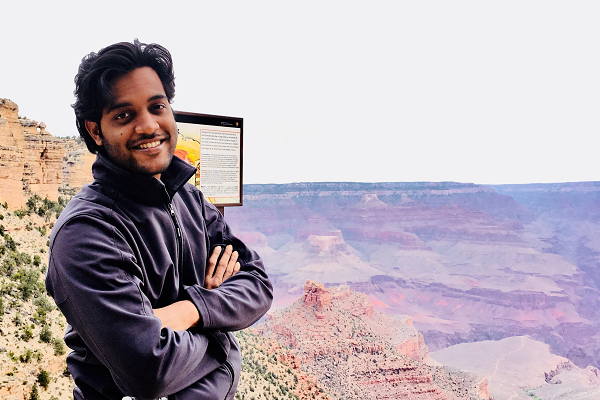 The Columbia Business School Indian alumni list will have another name added to it soon – Ramachandran Kasiraman. But this won’t be the first Ivy League university alumni list he’ll be on. He already has an MS from the University of Pennsylvania (yup, the same one that hosts the Wharton School).

But despite his successful MS application experience, a solid GMAT score (740) and a relatively unique profile, the MBA admissions experience wasn’t smooth for the US-based design & aerodynamics professional. Ram faced a string of 4 rejections in his first year of applications, when he had applied independently.

In retrospect, he is honest to admit that he was ‘arrogant throughout the process‘ in his first year of applying. In fact, the setbacks made him reconsider his decision to pursue an MBA.

From one Ivy League degree to another

I am a Mechanical Engineer, an amateur percussionist and a tutor for the underprivileged. I work in the automotive industry as a design and aerodynamics consultant. As the sole consultant for a leading OEM, every day is a new challenge – requiring instant yet sustainable solutions whilst building a strong client relationship.

The current role really helped me develop business skills while building on my technical skills, but it is restricted to a single industry / client. I wanted to transition into a position that would give me a broader exposure to different types businesses. Upon exploring that route, I realized that without an MBA it is much more slower and challenging to make such a transition.

Even before committing myself to the full application process, I took the GMAT in the 3rd quarter of 2016. Thanks to my affinity for competitive exams, like many Indians I guess, the GMAT prep was mostly fun. By dedicating every evening after work, for about 3 months, on GMAT Club and Manhattan Prep, I was able to hit 740.

I took mock GMAT tests every weekend and spent the weekday evenings going through the tough areas. I was not in my best health when I took my first GMAT. So I decided to retake the exam within two weeks, hoping to increase my score but got a 740 again. While this was a little shy of what I had aimed for, I decided to move on after my second attempt.

I started my applications for the Class of 2019 (starting Fall 2017) about 3-4 weeks before the Round II deadlines. Back then, I had just selected schools based on ranking and was pretty arrogant throughout the process.

I had a 97th percentile score on GMAT, a Masters in Engineering from UPenn, with a top 5% GPA, and a slightly unique work profile, at least in my mind, of working at an Oil & Gas startup and an Automotive Consulting firm.

Having gone through a subjective admission process during my MS application, I thought I had a fair shot at the top schools with my profile.

I applied for MS right out of undergrad and the MS admission essays are not very self-reflective (compared to MBA essays).

MS essays are mostly a space to highlight your research / technical aptitude and I had enough academic examples to highlight. I believe the universities understand that the students with a good academic record will naturally do well in the program.

With this mindset, I decided to work on my own on my MBA essays.

Some reflection and introspection before the second attempt

As I look back into my essays and applications from this time, it is very clear that I had not done the due diligence and was not really ready to start an MBA.

After the failed first attempt, I started debating my decision to pursue an MBA, especially given that I had already completed a Masters in Engineering from an US university. I started applying for some of my post-MBA target companies directly, but in vain.

It was then that I came across one of Sameer Kamat’s ubiquitous LinkedIn posts.

I reached out to MBA Crystal Ball (MCB) and asked a question about my desire to transition into management consulting with my current background. I was impressed by the prompt and clear response by Manish Gupta. The response was actually the nudge I needed to seriously reconsider an MBA.

As I restarted research for MBA applications, something that became immediately obvious was the fact that I was going to be pooled in the over represented Indian Male Engineer MBA applicants‘ category.

Furthermore, as an engineer at heart and by training – writing MBA essays was not my strongest forte. The professional yet personal response that I had received from MCB, alongside their MBA consulting reviews, encouraged me to work with them on my applications this time around.

I looked for 3 factors in selecting the right MBA program:

Based on that I initially selected five programs in the New York, Boston and Chicago areas and started working on my Round I applications for the Class of 2020.

Given that it was already pretty close to the deadline when I started working on the the essays again and due to an unplanned international trip, I ended up applying to only one of the schools out of my list. But this was probably a blessing as I was able to do more research into other programs and apply better in Round II.

Although a good amount of research would help give you a fair idea about the different components of the program itself, it is only after you talk to the current students you would understand if you are culture fit. Based on my interactions with the students, I had to alter my choice of schools.

Columbia Business School was in fact not there in my initial list of schools for the 2017-2018 round of apps. After I spoke with 3 current students and an alumni, I not only added the school to the list, but also made it my top choice.

Shahid, my MBA consultant from MCB, was very patient to ask me the right questions to bring out a strong narrative. The improvement from my first draft to the second was drastic. I was particularly very impressed with the brain storming sessions. The series of questions that the different programs ask really bring out the stories that you would have never imagined leveraging.

Even though I did not work with Shahid on my CBS essays, I was able to use points and stories that I had identified during my sessions with him. I had to give a deep and logical thought to some or all of my aspirations.

The MBA essay writing process really helps you to identify what you really want and don’t want when it comes to your career. It is during this process you ask yourself “WHY?”. Even though it was a stressful 4-6 months, I am really glad that I went through it.

After the wait, the admission call came when I was in a meeting at work. As I was presenting, I noticed the NYC number but could not get to it.

I eventually got the call again in a couple of hours. I went from restless to relieved the moment I heard them go ‘abc from Columbia admissions’. I am looking forward to starting my MBA at CBS.

I did not get into Booth and MIT. I was waitlisted at Ross (as of the writing) and I withdrew my application from a safety school that I had applied to. Also, I was not a re-applicant at any of the above schools. I had applied for a completely different set of 4 programs in my first attempt in 2016-2017.

Update: Ram did his summer internship with the famed Boston Consulting Group, and joined them after graduation for a full-time position.

From almost dropping his MBA plans, to working for one of the most prestigious (MBB) consulting firms in the world, he has come a long way.