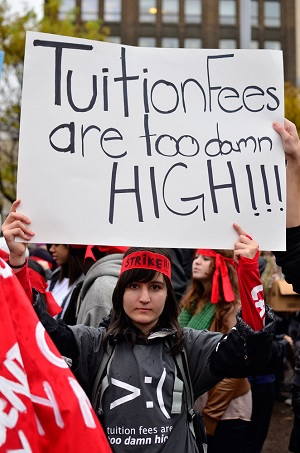 American universities roll out the red carpet for students from all over the world. But this is not entirely in pursuance of a mission to spread the bright light of quality education.

In these hard times of grant cuts and rising costs, there is a stronger, more basic, motivation: survival. To stay afloat, American universities simply need to sell their quality product — top-class education — to international students, mainly to those who can afford it. As a US Commerce Department official said, the US has “no better export” than higher education.

Quality US education comes at a high price for students from countries with currencies that can fill a small sack when changed for the US dollar. International students are not eligible for federal government scholarships that are granted only to US citizens.

A few foreign students receive university scholarships in the first semester or year, and some manage to receive aid only for subsequent semesters or years based on their academic performance. Other scholarships are available, but are highly competitive.

Only five universities are “need-blind,” which means they don’t let students’ lack of funds hamper their chances of admission. But the candidate needs a shining academic record to qualify.

Most international students, therefore, depend on their personal/family savings to fund their tuition and living expenses. Many students take huge bank loans, many of them mortgaging their parents’ homes. Many hire the best admission consultants to help them gain not only admits, but also scholarships to make the journey a little smoother.

Apart from money, international students diversify campuses and help prepare themselves and their American classmates for global careers. Their presence provides international perspectives to campuses, and their money helps give a fillip to scientific research at their institutions.

Arriving in the US following their dreams, most international students find what they came for: excellent faculty and campus facilities and exposure to the world’s best academic approaches. However, their fees are much higher than those of their American peers.

A few universities have recently increased the tuition fee for out-of-staters, including international students. The University of Wisconsin, for example, is collecting a $1,000 surcharge from international undergraduate students, taking the total fee increase for these students from $1,200 to $4,000.

One reason is obviously the cuts in state budget grants to universities, which have forced them to cut down on faculty and freeze programs. Some states such as Illinois have had to reach deep down into their reserves just to meet operational costs. A ready solution is higher fees from immigrant students.

Additionally, officials say, universities offer special services for foreign students, and the increased costs have to be met through higher fees. Moreover, universities have to meet tighter monitoring and reporting requirements in the case of international students since 9/11, which imposes an additional financial burden.

A percentage of the higher fees from foreign students is also used to fund scholarships for state residents—in Illinois, for example. Universities, which compete for international students who can pay the full fee, also have to spend on recruitment roadshows abroad.

A Purdue University official justified the higher fees for international students saying that in-state students and out-of-staters paid state or federal taxes or both, while international students or their families paid neither. However, this line of thinking has met with opposition, as the students contribute to the local economies of the state and indirectly pay taxes.

The rise in tuition fee has led to protests from immigrant students, who have raised banners that read, “We are not cash cows” and “Increase our voice, not our fees.” On the other hand, the growth in the number of international students at US universities has caused concern about a perceived lack of integration of immigrants with local students and communities, and about foreign students securing admission at the cost of local students.

Among other popular destinations for higher education, nowhere do tuition fees for domestic/EU and international students vary so widely as in the UK. Undergraduate immigrant students opting for some courses pay four times the fees paid by domestic/EU students.

For example, at Cambridge and Oxford, the annual tuition fee for international undergraduate students of management and computer science is $33,000-$35,000 compared with only $12,750 for UK/EU students. Adding to the immigrant students’ worries is the fact that their fees may be hiked midcourse, which would threaten the continuance of their studies.

Another argument in favour of higher fees for immigrants is that most students return to their own countries after studies, and they use what they learned in the UK to improve their companies and the economy of their countries.

The fee situation is similar in Canada, where the tuition fee for an undergraduate arts or humanities program for international students, for example, is three or four times the fee for Canadian students.

For example, at the University of British Columbia, the tuition and living expenses for a Canadian student enrolled in an undergraduate arts course is around $3,800 (figures in US dollars), while the fee for an international student is over $20,000. The tuition for the MBA course at the University of Calgary’s Haskayne School of Business is $25,000 for Canadian students and $44,000 for international students.

Australia is not far behind at all in collecting much higher fees from foreign students. According to online sources, a basic science degree at Melbourne, Sydney, or Queensland University comes at about $8,500 per annum for an Australian student compared with $35,500 for a foreign student.

Again, the justification seems to be that immigrant students don’t pay taxes, part of which goes to the universities as grants. The counterargument is again that students pay taxes upon entry into the country and when they earn an income, and also on every purchase they make.

Interestingly, a study conducted by the HSBC not long ago found that Australia is the most expensive country for an international student, with an average annual expenditure of $42,000 ($24,000 university fees and $18,000 living expenses).

An Australian blogger points out that the UN Human Rights Charter lists education as a basic human right. Large gaps between fees for local and international students from countries with low per capita incomes make higher education an unequal world that lacks higher ideals. But then, big education is big business; no one said it was large-hearted.