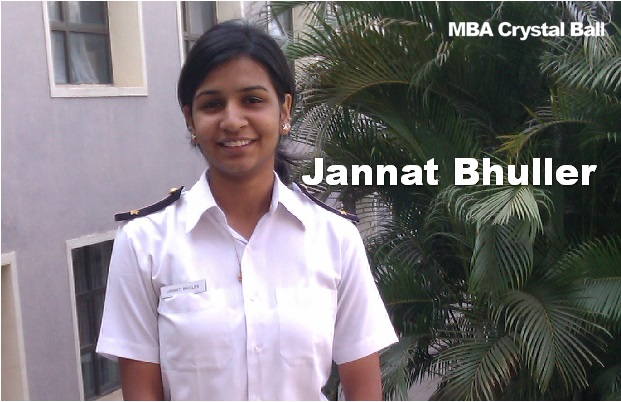 Life in the merchant navy isn’t easy. Several months away from home, often in rough weather, battling the forces of nature can take its toll on any professional. Which is why many marine engineers and merchant navy officers choose to leave the field and look for shore jobs are relatively more grounded (MBA admission with non-traditional profile).

Now think about how many female professionals you’ve seen in this field. Probably none. It’s a male-dominated industry that most girls would stay away from. That’s what makes Jannat’s story special. Not just because she had to do what everyone else around her had to (including the physically demanding tasks), but also deal with the additional burden of having to prove to her less-than-sympathetic bosses and colleagues that she was in no way less than any other crew member on the ship.

But that didn’t take away any of her creativity and enthusiasm, as we realised while working together on her MBA applications.

From merchant navy to ISB

As I begin writing this, I automatically get into the essay writing mode and I can repeatedly hear MG mention how the essay must be begin with a bang, how it must be precise and so on and so forth. Phew! I have to remind myself to relax and enjoy now that it’s all over and simply tell my story. And yes it’s the best kind of story, the one with a happy ending!

Tough life as the only female marine engineer on the ship

I was a marine engineer in the merchant navy and had been sailing for a little more than three years. My job onboard ships mainly involved taking care of any and all sorts of machinery onboard. I along with other engineers would handle the routine maintenance and carry out the breakdown maintenance when needed.

Shipping is essentially a male-dominated field and most of the times I would be the only female onboard. All through the four years I spent in a marine engineering college and then the three years out at sea, I had been in an environment where the gender ratio was 100:1.

Such circumstances forced me to learn how to fight for myself and accept the hard truth that I would have to always prove myself and probably work harder than my male counterparts if I was to have their respect.

On my very first ship I worked as a trainee under a senior engineer who was not very accepting of women out at sea and more so in the engine room. He would deliberately assign me jobs that would test my physical strength, one of which was test the tightness of engine foundation bolts.

This job is difficult because there are approximately 100 such bolts and each has to opened using a hydraulic jack because they are big in size and have been tightened to very high pressure. What makes the job even more challenging is that the bolts are situated at the lowermost part of the engine, so the place is really cramped and its extremely hot (since the engine was running).

We were crossing the Red Sea and it was summer time, and I remember wondering how I was going to finish the task. But that was all I thought, ‘how I would finish it’ not ‘whether I would finish it’. Once I finished it, the senior engineer was pleasantly surprised.

On each ship since then, it takes the crew a little time to accept me as a part of their team but I try and take it the positive sense. It just makes me work harder and better, and eventually it all always works out just fine. 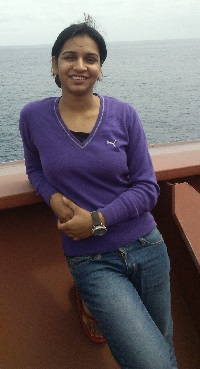 I had always planned to sail for a few years, enjoy the travelling while I saved some money and then go for an MBA which would help me get a job ashore. I started preparing for GMAT on the ship and when I came back for my break I gave the exam and scored 700. It was then that I realized that when you are out at sea, you are virtually cut off from the world.

The internet is really slow at best and that it’s not possible to connect or interact with people, reads blogs or just do the research that is needed for deciding what exactly it is that I wanted to do. I was absolutely clueless about how I should go about the entire process.

It was then that I found out about MBA Crystal Ball during one of my research sessions online. I decided to give them a try and it all started falling in place.

I discussed my plans with Manish Gupta (MG) and he suggested I take up the 3 school essay editing package that they provide. I had initially just planned to apply to ISB and schools in Europe that offered a one year program like HEC and IE, because I did not want a long break from work. But after my discussion with Manish he encouraged me to also think of schools in Canada and the US.

Just after my first interaction with them I noticed a remarkable change in my thought process, he just asked me the right questions and helped me figure out the answers. We all have our strengths and sometimes all it takes is for someone to help us realize them, which I think is what Manish tries to do. The brainstorming sessions are unbelievably helpful.

After such sessions I would always feel as if blocks in my mind were rearranging themselves and settling down in their right places.

I was so much better equipped to handle the essays after such sessions. There are little nuances about writing the essays which can be best learnt from such professionals. Manish does not write your essay for you, a lot of people believe that if you hire consultants, your work load reduces. On the contrary it’s the opposite.

He really grills you and pushes you till what you have in the essay is your absolute best. He really scrutinizes each of your essay drafts and helps you change what you thought was very well written into something even better written.

The entire application process is a long one and at times I was tempted to just submit the essays but it doesn’t work like that with Manish. He won’t let you rest until he is absolutely satisfied and he has pretty high standards. So he gave me the push that I needed at times to keep working.

Interview calls from ISB and IE 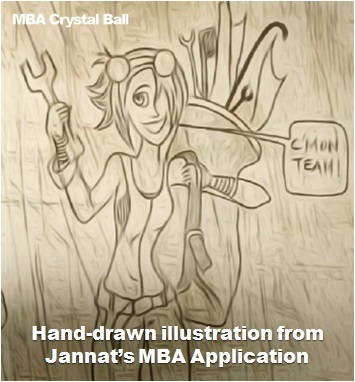 I got interview calls from IE and ISB while I did not make it to Cornell and HEC. I then took the MBA interview prep package from MBA Crystal Ball. They were very accommodating and designed a custom made package where I got one mock interview session for both schools.

I had a one hour interview on phone for IE. Thanks to the mock interview sessions with Manish I was fairly confident and the interview went well. For ISB, I had a Skype interview and there were three people in the panel. Most of the questions asked were the ones Manish and I had discussed beforehand. I got admission calls from both these colleges and finally decided to go with ISB.

But when I look back, the best thing about choosing MBA Crystal Ball was that after the entire process I had not just finished my applications, I had learned so much more. How exactly information needs to be presented, and while this might seem like a really simple concept, it is anything but that. I was so much clearer about what I expected from my MBA and where I wanted to end up.

Read these related posts:
– MBA after Merchant Navy with low GMAT
– MBA after 40 from ISB for former Navy officer
– MBA in Hong Kong: Mariner heads back to school
– Career guidance after Navy for Masters program