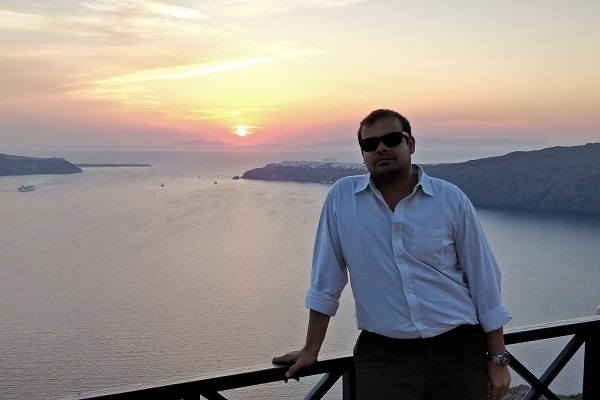 Like most sailors, Ajinkya Lele got to see the most spectacular sunsets and uninterrupted horizons during his career in the merchant navy.

After enjoying a few thousand of those, it occurred to him that he needed to accomplish much more in life, before the sun sets on his career. That’s when he seriously started thinking about an MBA, to narrow his horizons.

Not wanting to be adrift during his MBA application process, he decided to take professional help to navigate the choppy waters.
– MBA admission with non-traditional profile

MBA in Hongkong for Mariner

“When are we going to the Seas?!” would be the question on my mind during every summer vacation in school.

As a school going kid, I always yearned going onboard a ship where my father worked as a Master Mariner.

I was always keen on joining sea post my school and knew I wanted to pursue a career at sea.

After finishing my schooling, I joined maritime academy and also became a cadet / apprentice in one of the leading shipping companies.

I began my full-fledged career at sea as an officer in 2010.

Sailing is an exciting career with exposure to bad weather and pirate infested waters. I grew fond of the disciplined and very structured way of working onboard a ship.

I rose through the ranks and was promoted to Chief Officer at a relatively young age of 27.

I was certain I wanted to be at sea for the rest of my working life. The jigsaw of life seemed to be falling in place at that point.

A common question that I was asked when I was contemplating giving the GMAT.

‘Why would you want to go back to studying when you already have a stable and a decent paying job?’

Two years into serving as a Chief Officer, I realized I was stagnating and getting too comfortable with the set ways of working.

Also, I realized I would hit a glass ceiling once promoted to the rank of Captain on-board a ship.

It didn’t really go with my personal characteristics to do the same job repeatedly. I yearned for new challenges.

I thought hard about what I want to do next and what career would make sense given my background.

During my research on switching careers, I came across blogs on MBA Crystal Ball (MCB) where people from similar background had made the switch to corporate careers, which further imbibed confidence that I could make that shift to B-school.

Given my unconventional background and age nearing thirty, I knew it was going to be difficult conveying my experience and skills to any potential B-school.

Reading a few more blogs on MCB made me realize that a third person’s perspective from outside of the maritime fraternity could help me convey the message I wanted to.

This was one of the main factors that convinced me that I needed a consultant.

I got in touch with Manish Gupta (MG as he is popularly known), he gave me good insights on what potential careers and schools I could look at.

This opened up new horizons for me. MG asked me to get back once I gave my GMAT.

I had spoken to a few other career consultants during this time, but it was MG’s honest opinion that made me choose MCB.

Tackling the elephant in the room – GMAT!

It was in mid-2018 that I made up my mind about MBA. I had just given my Master Mariner’s certification exam which was taxing and required a fair bit of studying.

The day I finished this exam, I sat down contemplating when I should start preparing for GMAT. It had been a while since I had attempted any competitive exams and I knew it would need lot of time and effort to get a good score.

I took the plunge the very next day, knowing it was now or never kind of situation for me. I would say I was a bit lucky since my profession allowed me to have 3 months of vacation.

This way I could dedicate all my time at home for GMAT. I prepared for around 3 months and gave the exam in September,2018. I scored 690 and thought this was a decent score to begin my application.

I spoke to MG the very next day and decided that this score would be worth applying to my target schools, given my 8 years of experience.

I had started researching schools while preparing for GMAT. I shortlisted HKUST and INSEAD, Singapore.

I was looking at schools in Asia as post MBA I intended to stay in Asia as I have firmly come to believe that the next century belongs to Asia.

I was looking at schools which have a diverse class in terms of culture and profession and the small class at HKUST attracted me as it would mean a much more personal experience.

I spoke to a few alumni of HKUST and I got positive feedback from all. That cemented my choice.

I took the 2 School MBA Essay Review service from MBA Crystal Ball, which I thought would suffice.

I was assigned to Rohit for my application process. I was asked to send a rough draft of essays to Rohit and we decided to have a ‘Brainstorming’ call two days later since I was scheduled to join back on ship in 4 days.

During my Brainstorming call with Rohit, the conversation started with basics like what I expected out of the program and what my career goals were.

Rohit went deep into each aspect and sentence of my draft, that is when I realized there were so many aspects of my essay that didn’t add up and I had not understood the essay question thoroughly.

PS: If one thinks that the consultant would be writing the essays, then MCB is definitely not the place for you.

I was told there would be 3 reviews of essays. The feedback I received after the first essay draft forced me to introspect.

With the hectic work schedule onboard ships, I was motivated to find time to get all my thoughts in 500 words.

I really started to think hard on who I am as a person, what I really want from the MBA program and where do I want to head post MBA.

It took me almost 3 weeks to send the second draft.

I think the essays do really help you discover more about yourself in more ways than one.

This was the moment when I thought to myself, I had made the right choice by choosing MCB!

By third draft, I was content with my essays.

We worked on the final drafts of my essays just in time for the submission cut off dates and I was satisfied with the way the essays had turned out.

I submitted the essays and then got a call from HKUST for the interview.

I gave my interview in December and within 15 days I was given an admit offer. Preparation for the essays had kind of prepped me up for the interview as well and I was confident enough to give the interview.

Needless to say, I was elated on seeing the admit offer and out of words!

It was the endless support from my wife that made it possible. ‘Never say Never’, as the saying goes, admission at any good B school is within reach as long as you have a good narrative and right story to tell.

It’s just been a month since I have joined HKUST and it has been an amazing journey so far with students from 25 countries in a class of 95 and students and from various professions, including a Jazz artist!

It’s the peer-to-peer learning that makes the experience even better.

Another intriguing part is most of the course work is done via case studies which has really widened my horizon. I am sure the remaining journey at HKUST is going to be a great learning experience!

Overall, it has been a journey of self-discovery and getting clarity on what I really want from life.

To all candidates who are thinking of applying to B schools in Asia, I would say you are on the right track!

The rise of top Asian B schools reiterates the fact that Asian century is here.

Though Asian schools are younger, it is the very reason that makes them hungrier for success!

8 thoughts on “MBA in Hong Kong: Mariner heads back to school”