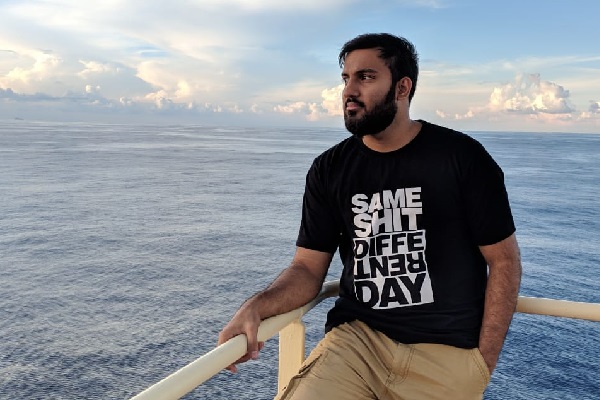 The caption on Srikumar (Sri) Balachandran’s T-shirt echoes the sentiments of many talented and accomplished sailors like him, who’ve been at it for a few years and realise that there’s so much more that they can do.

While a merchant navy job offers several benefits (with lucrative salaries topping the list), there are also several downsides that prompt sailors to explore a career beyond shipping.

This includes driven, high-potential folks like Sri, who’ve already risen through the ranks faster than their peers.

But there are also several questions that make the career change planning very difficult.

After a few years of trying to untangle the web on his own, Sri felt it was high time to get some professional career guidance and break the vicious cycle of confusion and procrastination. That is when the tide started to turn.

“The sea, once it casts its spell, holds one, in its nets of wonder forever” – Jacques Cousteau.

Even in the roughest and scariest of weather, there is a certain beauty that lies in oceans.

My fascination with life at sea began way early. My maternal uncle was a Sailing Master and I would always be in awe listening to his stories.

Even before 10th grade, I had already decided on my career as a merchant mariner.

After schooling, I was inducted into a unique dual program by a leading shipping company, Thus began my exciting sea-going career.

Now, a life at sea is not for the faint of heart, It breaks you down and re-makes you into a better version. It allows you to build a character and skill set not easily achieved.

I am however grateful to my career so far, for it has made me into who I am.

From a Junior engineer to a First engineer, I rose through the ranks quickly and was promoted at a relatively young age. Life seemed to be going as per “THE PLAN”.

Early on in my career I was given the opportunity to be part of new delivery vessels in a shipyard, the exposure to the shipbuilding took root somewhere at the back of my mind.

As time passed as a First Engineer, I found myself getting stuck in the same loop and yearned for more.

Although, I always found myself at home onboard at sea, I realized that my career graph would plateau once I took up the next rank of Chief Engineer.

At this point I started looking for other options, to be more involved, to do something more than just a sea going engineer.

I wanted more from life!

As usual, I fell prey to the MBA mindset under peer pressure, I convinced myself that the only option to climb higher is with an MBA.

On hindsight, I should have read the book “Beyond the MBA Hype” by Sameer Kamat.

I would strongly recommend the book for anyone contemplating higher studies without having the clarity of thought.

During my research I came across MBA Crystal Ball, and reached out to them back in 2018.

That is when I was introduced to Manish Gupta, or more fondly known as MG.

With barely a brief introduction in my mail he was already able to assess that I still did not have clarity in my thought process.

He asked me to take my time and get my thoughts in order and get the GMAT done with and get back to him.

At this point life hit me at warp speed and my MBA plans took a backseat due to personal reasons.

Career counselling to address my confusion

I once again reached out to MG in 2020 with a firm resolve to get this done.

However, I still did not have much of a clarity on my thought process and so went ahead with the career counselling service.

I believe this is very helpful if you are a Master Procrastinator like me!

While I was onboard, I had a telecon with MG and he got me thinking about what I want from life.

Even at this point I was only looking at MBA as an option and at careers beyond shipping.

This is where MG and I went through my detailed personality evaluation and came up with 6 different career paths, clearly mapped out within my domain and outside my domain.

Which is the best masters course after merchant navy experience?

Once I got back home, I began my GMAT preparation aiming for the top universities.

At this point, few of my juniors reached out to me for help with their shipping careers and examinations and I realized that I still loved what I did.

I just needed a different trajectory within my domain where my vast experience would matter.

At this point I stumbled across the Master of Engineering Leadership program at The University of British Columbia specializing in Naval Architecture and Marine Engineering.

The small voice which I had earlier pushed aside during my time at the yard came back with a new vigor and the more I found out about the program and spoke to the alumni the more I felt it to be the right fit for me.

The only issue, I had but 10 days remaining until the application deadline!

I reached out to MG immediately for help with my SOP. MG connected with me right away and we had a detailed conversation of the masters course and my change of thoughts.

We were lacking in time so we dug into it right away with a brain storming session where he made me question myself on what I hoped to achieve from this program, and my career goals.

He lit the sparks in my mind to begin my introspection. This call was the highlight in my application process for it gave me even more clarity and I was now 100% convinced I have chosen the right program.

Now let me re-iterate, MG will MAKE YOU WORK for the essays.

He will light the fire and help you with a bit of fuel. But the work will have to be yours and this helped me A TON during my interview.

MBA Crystal Ball is NOT the place for you if you expect things to be handed to you on a silver platter. But it surely is the place, if you want to be assured of a confident application, provided you are ready to work for it.

The package had 3 reviews for the essays, which is plentiful once you know how MG works and fuels you to think more during the brainstorming calls.

The feedback I got for the first draft was like a bolt from the blue, with no sugar coating. This forced me to get back to the thinking board and go deeper into myself.

The essays and the work with MG made me realize so much more about myself that I look at it as a process not just for the application but rather an insight into my life and career.

I knew right from his first response to me via mail, back in 2018 that I had made the right choice with MCB and MG, and I could assert to that once again.

With MG’s help I managed to put forward my best version just in time before the deadline.

I gave my interviews a couple of weeks later and the essay preparation had already built a sound foundation for this process as well.

Soon enough, I was overjoyed to receive my admit offer, and MG was one of the first persons I informed. He shared the same zeal as I did on hearing the good news, once again proving that the commitment shared by the MCB team is not just for the application but all the way.

None of this would have been possible to do within the 10-day timeline without the support of my wife and parents who encouraged me to keep at it. And not to forget the vast amount of patience that MG has to put up with me.

I am currently awaiting my visa and thanks to my career counselling sessions with MG a year ago have been pursuing other certifications as well while I wait.

With the push to a sustainable shipping I do hope to make the best of my time during the course to contribute to a greener shipping.

Thanks to MCB and MG, I have now once again begun my journey into the second innings of my career.