From the earlier article that we wrote, you already know about the average starting salary after an MBA from USA, UK, India.

But what happens after a few years to MBA grads? Does the initial compensation spike lose or retain its lustre?

The latest research and analysis done by Financial Times corroborates the fact that the value of an MBA degree remains at the top of the league.

If money is among the high priority factors for you while evaluating international higher education options, despite all the bashing it gets the MBA continues to dominate over time.

Based on the 2015 Global MBA Ranking data, here’s what the FT survey says. All amounts are in American dollars (USD). 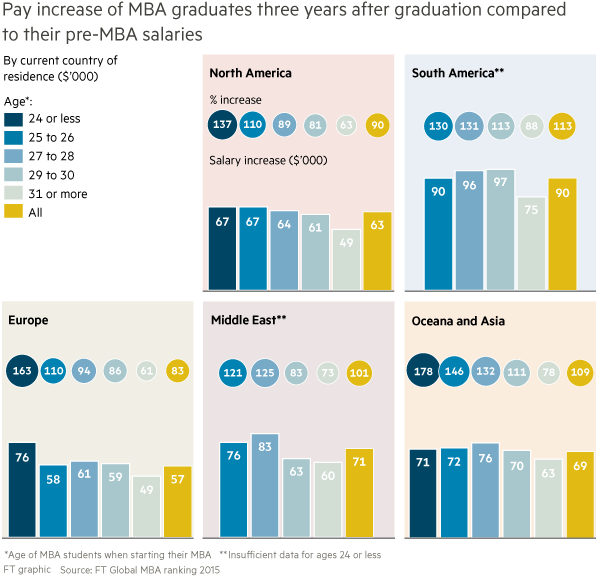 The key takeaways are as follows:

Before getting carried away by these numbers, there is some reading between the lines that you need to do.

The very first statement in the Financial Times article says that the biggest benefit of a salary hike after MBA goes to those who start and complete their MBA degree earlier in their career (i.e. younger professionals). And the inference is drawn from the salary increment figures across various age groups.

But this is only the partial truth, as seen from a statistician’s perspective.

In percentage terms, the increments for the early birds surely look better. What the FT team fails to highlight is that the average starting salaries of younger MBA graduates would be lesser than those who have more experience. It’s tougher for an MBA grad over 30 to get the same percentage increment in salary compared to someone who completed the degree at 26.

FT also doesn’t disclose the specifics that matter how credible and extendable these results are. For instance, the number of participants in the survey, the bschools they attended (assuming it was a subset of the FT top 100 ranked names), their pre-MBA and post-MBA industries/roles.

Anyway, technicalities aside, the bigger picture is still consistent based on other similar surveys (Bloomberg did one some time back).

Whether you are a devotee of Goddess Lakshmi or Saraswati or both, the MBA degree presents itself as your most-preferred road to salivation…sorry, salvation.

Financial Times may approach you for a similar survey in 3 years.

But before you pop the champagne, there’s work to do – starting with your GMAT prep and MBA application strategy.

4 thoughts on “How average MBA salaries grew over time in USA, Europe, Asia”