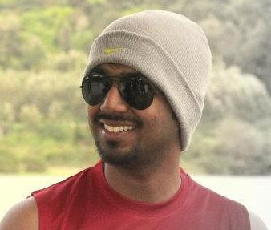 MBA success stories are not always about beating the GMAT exam and entering into the 700+ GMAT Club. Sometimes they are about beating personal challenges and entering into a fighters club of a different kind.
Sriram narrates all the hurdles that came in his way and how he tackled them before he got an admit from the UCD Michael Smurfit School of Business (Ireland).

If you ever run out of steam, read this and your problems will seem miniscule in comparison to what Sriram had to go through. Another inspiration booster coming right up.

If you are expecting a fist pumping, jaw dropping, “from 640 to 750” or “how I got into Stanford” kind of story, then I am afraid you will be disappointed. This isn’t an orgasmic GMAT destroyer experience you often read/re-read for motivation. This, I can say is a sequence of events which unwound like the reels of a Yashraj movie in a span of 12 months. A straight from the heart-simple story!

I am not from IIT, not from IT, and I do not belong to the “super genius club”. But I am from a regional top engineering college and I have a couple of awards and accolades under my belt, both in academics and in professional front. I have also been an entrepreneur and have run a start up for almost a year. Although the experience was worthwhile the financial aspect plummeted and the time had come to move on to the next objective.

I felt that I was pigeon-holing myself and wanted to work in a different capacity and I realized that higher education in management was the transition platform. Global experience, exposure to different cultures, people and ideologies will help not only to develop new skills but also to hone existing skills. I sincerely yearned for that. This made me set my path towards studying abroad.

But before that I had to overcome lot of personal and communicative inhibitions and thanks to Sameer & an acquaintance in New York, I could improve a lot!

Before the admissions and applications

Like all other MBA aspirants I too went thru the painful yet important process of introspection, GMAT preparation (the worst was to choose GMAT study materials), school selection etcetera. It really took a lot of time to realize what I wanted to do, what I enjoyed doing and what path my career should take.

It is always better to have a profound and pragmatic thought before you decide to invest your money (Sameer’s book reinforced my beliefs!). So, after considering too many options I finally came down to two areas – Consulting (Strategy) & Supply chain management.

Little did I know the difficulty of getting into strategy consulting! After a lot of research over the net and other sources it became evident to me that it’s a niche area and to get myself into one of the big 5’s I must have very strong credentials. Few very important factors were Brand recognition (of the college), high GMAT score (700+) and a great profile!

On the other hand, scope and recognition for SCM has grown over time and is now considered as a hot area in the present market. So this made my school selection process a bit easy as I was now sure what I wanted to do and what the requirements were. But I had not yet looked into a key aspect of the whole process- my finances!

After a lengthy discussion with my parents and after looking at the financial health of the family it was pretty clear to me that a North American MBA/MS at any top 20 schools was highly unlikely to happen. Europe always fascinated me and with an average age in the late 20’s and much cheaper 1 yr programs, a couple of top schools came under my radar.

With my list of schools ready I did one thing which I seriously recommend others to do too. Send your resume for a profile evaluation! Most B schools agree to give an evaluation (not in the peak season thou) which really makes you to realize where you stand and helps you plug loopholes if any. I got a very positive response from St.Gallen, HEC Paris, HHL, and EBS.

It was a big boost in confidence and I knew all I had to do was get a 700+ and ace the interview (My essays were pretty much ready by the way!).

Roadblocks during my GMAT preparation

With all these in mind I started my GMAT preparation and yeah, mine was a reversal process with all other factors being ready except for the GMAT score. I chose self study over any classroom training and I thought I knew how to crack the GMAT.

But it so happened that my grandfather became terminally ill and was admitted to a hospital. Duty bound, my brother and I took turns to look after him and I religiously carried the GMAT Official Guide (OG) with me to the hospital too. This went on for a couple of weeks until he was discharged and I was back to square one, my preparation had not progressed and the D-day was nearing.

After a month and a half in to preparation I was zooming in confidence and to test the waters I took my first GMAT prep practice test. Scored a disastrous 390!! It was enough to shatter my confidence and ego at the same time. At one point even my laptop screen popped up a message- You dumb a$$!

I had wasted so much time preparing and all of that was in vain. GMAT was really different. I went thru many blogs and forums and rectified my mistakes. Respect for GMAT grew each day & finally I began to ace the practice tests. A week before the D- day I was hitting GMAT score of 650 to 660.

I hoped a miracle to happen on the test day and somehow reach the 700 mark. On the test day, my confidence was soaring and I pretty much did well (or so I thought). I hit the submit button and boom – 600!

I was simply devastated.

After sulking, cribbing and feeling pathetic I started preparing for a retake. I dug my weak areas out, spent a couple of more hours on verbal and a week later took a practice test (Manhattan). Scored 690 and with renewed confidence decided to book a date in November. I knew things were falling in place but fate had something else for me in its kitty!

One night in the month of November, I got a call from an unknown number. I picked up and the next couple of words made me numb for a moment. My brother had met with a major accident and was shifted to a hospital. I dashed to the hospital to see him blood soaked, in a sub conscious state.

I couldn’t even panic as my parents were out of town and I had to handle the situation all alone. The only thing which ran in my mind was to see him alive again. It took a couple of weeks for him to recover and for me to get back to my prep process. Time was running out and I knew I had to buck up and get my prep paced at rocket speed. But, something else was waiting to happen, yet again!

A couple of days later all hell broke loose and I had to see many relationships in my extended family becoming sour and a great Indian melodrama took place. One thing led to another and we finally had to move out of the place in which I spent 25 years of my life! It was emotional atyachaar to the core.

It was as if I was being pushed into a roller coaster and was being given free rides.

There will always be people around us who try to break us down in tough times and I was “blessed” with a couple of them. Their every condescending, talk-behind-the-back, judgmental attitude drove me nuts time and again but over time I learnt the art of ignoring their immaturity. I chose not to react but to respond through my achievements.

But all these events threatened to jeopardize my whole objective of studying further and reaching my goals.

My budget naturally came down and it seemed to become a daunting task to arrange the finances for an MBA, yes MBA is expensive and scholarships are considered to those who have a 650+ in GMAT (Schools in my list had that condition).

By this time I had lost a great amount of time and focus and I knew with this state of mind it was next to impossible to do justice for my GMAT preparation. I even reached a point where I hastily started looking for a job to bring some balance at the home front.

The ordeal was brutal but it made me learn a lot of life lessons and made me tougher. So, what did I do? Did I give up on my goals? Did I get a job which I did not like? Did I somehow take the GMAT and scored 700?

Amidst all these chaos I simply started looking for top ranked masters in supply chain. I shortlisted a couple of them and with no great expectations or whatsoever, applied. I knew this was my last resort to put things back in place where I wanted.

Finally on the day of Shivaratri I got a mail from the Adcom (Admissions Committee) of UCD Michael Smurfit School of Business (Ireland) stating that my resume was very strong and I had been offered a full place for their masters in SCM!!

I just couldn’t believe what I read. It was absolute bliss. UCD met all those factors in my check list- global brand name, budget, rankings & quality.

It is definitely ok if you are not a happy-go-lucky kind of a person. You can still get what you want if have patience and perseverance. Never ever give up!

My name is Sriram and this is my story.

For his grit and determination, Sriram wins our respect. We hope that the worst is behind him and wish that the rest of his journey is smoother.