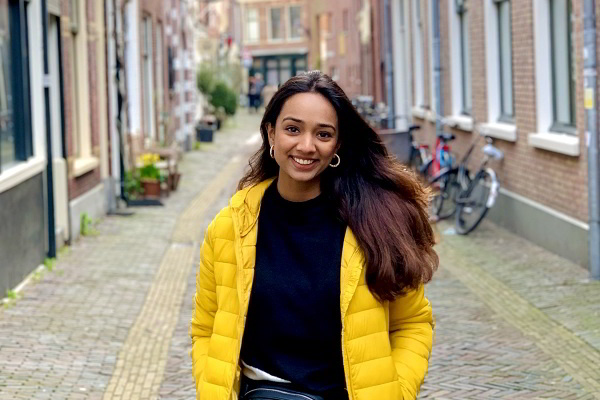 “What are the top masters courses after Bachelor of Arts, in Canada?” several B.A. graduates ask us.

But there are other masters degrees such as MS, MFin or MiM, that are open to fresh BA graduates with no experience (Read MiM after BBA).

Aditi Sharma completed her bachelor of arts degree in economics with flying colours. Instead of going for a masters degree immediately, she took the wise decision of taking up a job and gaining some hands-on skills.

A year later, she was clear why she wanted to study in Canada. She also had more clarity on her career goals and which degree will get her there. And then COVID happened!

She shares her application journey, applying to the top MiM degrees in Canada while fighting with the Corona virus.

Master’s degree after Bachelor of Arts

My MiM in Canada admissions experience

Throughout my life, I have been inspired by my parents who work in the field of business and finance.

Conversations at home would revolve around the economy, banking, finance and this truly had a great influence on me while growing up.

I had always been a good student in school and decided to take up PCM with Economics during high school.

It was here that I developed a keen interest towards Economics as a subject and thus took it up as my major during my undergrad, pursuing a Bachelors of Arts (Honours) in Economics from Amity University.

Having graduated school with 93%, I was unable to get admission to a tier one school and this is where I first tasted rejection – a feeling that till date haunts me.

During the three years of undergrad, I decided to immerse myself in various activities and internships in order to truly see where I belong and understand my strengths and weaknesses.

The first internship I undertook was at a housing finance start up in Mumbai – a life changing experience for me. Being away from home made me independent and understand myself so much better.

Working for a start-up meant that I had to don many hats at any given time. This was also the first time I presented a research report for a Company – an opportunity that really made me come out of my shell.

The three years in college were also a period of immense self-discovery. I found an interest in writing and started freelancing for a website called MagicPin – reaching an audience of 5 million readers. I even started my own blog in December 2018.

Being a linguist, I decided to study French as part of my curriculum in college and also took up learning Spanish at the Embassy of Spain.

As opposed to many students in my class, who’d generally work post undergrad or straightaway pursue a traditional 2-year MBA in India, I decided to take my time and figure out what I wanted to do.

In the summer of 2019, I started researching about colleges for my post grad and fixed my choice of location as Canada; one thing I knew for sure was I did not want to return to India post grad and wanted to settle down abroad.

Canada being an immigrant friendly country with top quality education made my choice even easier.

I started my GMAT preparation in July and decided to sit for the exam in September – a decision that I took in extreme haste.

I was bummed by the result and cancelled my first score. I decided to take a break from exam prep and focus on my work experience for the next coming months.

I got the chance to work for a Dutch multinational company – Cooperative Rabobank in October 2019.

I was a fresher in the field of Corporate Banking and was rubbing shoulders with the most intelligent people from India as well as abroad.

Interacting with senior bankers and financial analysts really forced me to put my best foot forward.

I was working in the Global Client Coverage department and was required to financially analyze companies’ performance and thus prepare credit applications.

I truly enjoyed the work I was doing and realized my potential as well.

However, a major realization during that past one year was that I lacked basic business knowledge and needed a holistic view about business and finance.

This is where I decided on pursuing a Masters in Management (MiM) – a degree tailor made for students belonging to non-business backgrounds.

In March 2020 when the world went into lockdown, I decided to start prepping for the GMAT once again and wanted to be ready for R1 applications when the time came.

This time around I took a new approach to my prep and really went deep into the basics and focused on where I was going wrong.

I had planned on giving the GMAT in June, but as luck had it, I contracted Covid19 and was bed ridden for the next 2 months.

By this time, I was really stressed out since most my applications were opening in August, with the first deadline in October.

This was also the time I started researching about college apps, consultants and reading b-school forums. I read up quite a bit about MBA Crystal Ball and decided to send out a mail to Manish Gupta (MG).

During our first interaction, MG asked me about my profile and career goals in order to see whether we were a good fit for each other – something that immediately made me realize that I was speaking to the right person.

I told Manish that I’d not yet given my GMAT and he insisted that I get back to him after receiving my scores – again, something that I had not experienced with other consultants I interacted with.

The immense support and guidance I received from Manish in the initial days is why I wanted to go ahead with MCB.

In September, I gave my GMAT and was initially disappointed with a 650 – I was so sure about getting at least a 690 since I was continuously scoring high during my mocks.

I did not want to give the exam again due to time constraints since MG had mentioned that each application would take at least 3 weeks.

With a score of 650, I knew I’d have to prepare a great application in order to get accepted to top Canadian B-schools.

I went ahead and signed up for the 4 school MiM essay review package with MCB.

For the application process, I was put in touch with Avinash who was my mentor and guide throughout the 3 months.

At first, I was reluctant about working with a consultant whose expertise was in the field of Indian b-schools such as IIM and ISB.

Having spoken about this with Manish, he once again assured me that I was in great hands and there was nothing to worry about.

And MG was right. Avinash really was able to bring out the best in my applications.

He was extremely patient in his approach and was open to any and every question that I had. Even though we were extremely tight on time, he assured me that I’d be able to give in my applications well before the deadlines.

During brainstorming sessions, he’d ask me relevant questions that only made me think deeper about the elements I wanted to add in my essays.

Avinash really did work around the clock and the amount of faith he had in me and my application is what made me so confident by the end of it.

I applied to Schulich, Sauder, Desautels and Beedie, and received interview invites from 3 of them – rejected at Desautels, McGill.

Again, Avinash was open to any questions that I had about the interview process as well and answered all my doubts.

My interviews with adcom were based on standard questions and lasted for an average of 40 minutes.

On 18th December, I received my first admit – Schulich School of Business and being admitted to one of the top 3 b-schools really got me super excited.

The following day, I received admits from both Sauder (UBC) and Beedie (SFU).

I had told my parents I wanted my decisions to come in before Christmas, and admits from 3 out of 4 schools really is my Christmas miracle!

I have decided to go ahead and accept the offer from Schulich, and this journey wouldn’t have been the same without Avinash and MCB.

Also read:
– List of MiM scholarships
– Is an MiM degree worth it?
– MiM student experience in Europe
– MiM after BCom: How I got into London Business School, ESSEC and ESADE with 690 GMAT
– MBA after BSc with GMAT waiver

2 thoughts on “Master’s degree after Bachelor of Arts: MiM in Canada admissions experience”