Undergraduate degrees in USA are pretty flexible. As part of the 4-year degree, you can choose a major and minor subject, and the two need not be related.

Samarth, who started out as a diehard fan of computers, discovered a fascination for economics after starting his degree. He impressed the recruiting team at Amazon and bagged a coveted internship with the tech biggie.

He shares his journey as an undergrad student juggling economics and computers, changing aspirations, confusions, inhibitions and how he finally got his confidence back.

Life as an undergrad degree student in America 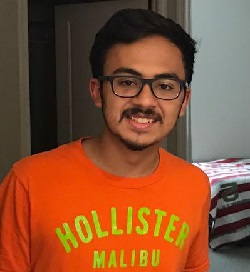 I just recently graduated from the University of Illinois at Urbana Champaign with a degree in Economics and a minor in Computer Engineering.

The main thing that I think stood out about me was my interest in computers, ever since I was just a kid I’ve been at the computer desk doing whatever I could to learn more about something, whether it be like news, or as I grew, how computers worked.

When I was in my sophomore year in high school, I kind of became the tech guy in the family after I picked up a phone call from my aunt that was meant for my dad, who was typically the tech guy.

I fixed her problem in under a minute (her computer display had flipped upside down, pretty funny but an easy fix), and she told lots of people to call me for tech issues afterwards.

After that I realized that this might be something I want to do as a career, so I started taking some steps to try and confirm it, I took an internship position with my dad’s company as an IT help desk intern, as well as enrolled in AP Computer Science and joined the CS club at my school.

All of these really pushed me towards Computer Engineering and motivated me to major in it in college.

My profile for undergrad admissions

My application as a whole was not anything special. My GPA was about a 3.7 unweighted, and somewhere around 4.3 weighted.

I had an ACT score of 33, and not many special extracurriculars outside of Marching Band and Computer Science.

My major concern was with my GPA, it was somewhat low for what I was applying for, but I was happy with my ACT score. I had taken a practice exam at school and gotten a 30, which was a little below my expectations, as well as my parents.

They wanted to enroll me in some outside classes to get help, but I refused. I thought those classes were basically just glorified textbook readings, so I just went out and got the best ACT books myself, and self-studied sections that I was weak in, particularly the English Sections.

When I went to take the actual exam, I got a 33, which I was quite happy with.

The right mentoring can make a BIG difference

When the time came to finally apply, I was overwhelmed! I had never really gone through any experiences that I thought would make a good college essay.

My extracurriculars were about average. And my GPA was kind of low mainly because my freshman year had a lot of changes. We had recently moved, along with a whole new school, making my GPA suffer.

This is when I contacted Manish Gupta, he listened to my rather boring life story, looked over my scores and extracurriculars, and also my draft of a college essay, based around the story of my aunt, and how it pushed me to pursue Computer Engineering.

We talked over the course of a few days, and we drastically improved my essay, adding an overall theme of an obsession with computers that culminated in my experience with my aunt, and my realization of my path forward.

He also told me that while my GPA was about average, colleges would look at my growth over the four years. And they would understand that while my freshman year GPA was low, they would focus more on how I improved year after year. Along with my strong ACT score, it would actually make quite a strong application.

Backed by this knowledge, I applied to better schools than I had initially thought were possible.

The schools I had marked down as my reach schools became my reasonable prospects, and my previous prospects became my safe schools.

I applied to a vast variety of the top Computer Engineering / Science schools including Cornell, Carnegie Mellon, Purdue, Wisconsin-Madison, Georgia Tech, and of course UIUC.

I did not do too much research about these schools, as I was more concerned with pure merit at the time. But after applying, I began to think about where I wanted to actually spend 4 years living.

I started researching the campus life and went on tours as well. These knocked a few colleges off of my list, including most surprisingly, Cornell.

Based purely on merit, Cornell University would have been my number one or number two choice on that list.

But after talking to a few alumni, and visiting the college unofficially, I found that the campus was a bit secluded, and combined with not knowing anyone in the area I did not think I would be comfortable there.

This helped solidify my expectations from a college campus. I wanted it to be at least a little close to home, and have maybe one friend from high school going in with me as well.

In the end, I chose to go to UIUC, since it satisfied my campus requirements, was a well reputed school, and had a solid campus life.

I had gotten into Purdue, Wisconsin, Georgia Tech, and a few other schools, but UIUC seemed like the best choice out of all of them, especially when considering in state tuition.

My undergrad experience, while amazing, was not exactly as I had planned, as you may have noticed I did end up majoring in Economics over Computer Engineering.

After going through freshman and sophomore year at college, I discovered that while I did enjoy computers and understanding how they worked, I could not see myself pursuing it as a career.

This actually led to me becoming depressed for a few months as my life plans were now in jeopardy, and I had no clue what I wanted to do anymore.

Thankfully, I found that economics and data analysis reinvigorated my desire to learn and provided me with a solid career path that could be flexible to any further changes that may come up.

Overall, the college experience was an incredible journey of figuring out myself, and also just enjoying life the way you really only can at college.

My biggest piece of advice is to just be yourself.

All the time I saw international kids trying to fit in with people that they thought were cool or wanted to be more like.

If that is actually what you want to be, go for it, try and change yourself to be like that,

But really, if you just stick to who you are and what you like, there will guaranteed be people around you who feel the same, and those friends are better than friends you have to fake your identity for.

How I got into Amazon

Now that I have graduated, I am currently interning with Amazon, and hope to get the full-time position soon.

I applied through their own jobs website, and luckily got through the first initial round of essentially just resume screening.

When it came time to the actual interview, I was nervous, I thought I might be under-qualified, and wanted to do things to make up for my potential lack of qualifications.

A couple days before the interview though, I remembered that I felt just like this during my undergrad applications, and thought that maybe I should just be myself, and see what happens.

The worst thing that could happen is I don’t get in, and I just keep applying to other spots, which I had been doing, and was still doing, so there really wasn’t anything to fear.

During the interview, I didn’t put on any masks, I didn’t try to be overly professional, I just did, said, and asked whatever came to mind, just like a normal conversation.

I walked in with no preparation besides answers to the basic everyday interview questions, and I walked out feeling relaxed, with no stress. If they did not like who I actually was, then that is not the position for me anyway.

A couple days later, and the interviewer reached out to me, telling me that the team really liked my casual attitude, how it was a breath of fresh air from the typical interview process, was impressed with my credentials, and that I was being offered the position.

Of course, I was ecstatic but took my time considering whether or not I wanted to join. I contacted some of my relatives who worked at Amazon about the work culture, growth potential, and just what they thought of the company.

After that, and a bit of my own personal research, I happily accepted the position, and so far, I am incredibly happy with the job, and have learned a lot of real-world applications for my college skills.

And that brings us up to where I am today!

Looking back at my journey, I am pretty proud of how I handled things, and how I grew from a person who doubted essentially everything I did, to someone who is confident enough to feel comfortable in most situations.

There were some amazing highs and some incredibly difficult lows, but that is what I needed to go through to grow, and I would not change anything about it.

Also read:
– How to get into the top universities
– Best undergrad engineering schools