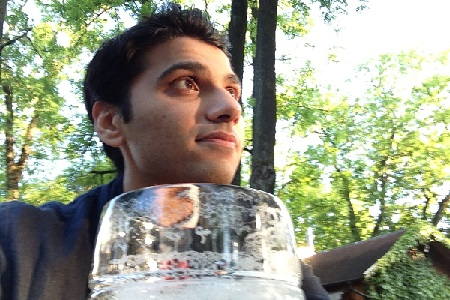 Is your glass half full or half empty? Why not fill it up and eliminate all confusion?

That’s exactly what chartered accountant, Jayendra Ruparel, decided to do. With a decade of work experience under his belt, he was happy with his role. But he was also aware that time was running out, if he wanted to pursue an advanced, globally recognised degree.

He had worked for 7 years in Germany, and was well-aware of the professional opportunities the country provided. So when he started thinking about upgrading his qualifications, Germany was at the top of his list.

We’ll also take the opportunity to give a thumbs up to the Mannheim MBA admissions team for designing a rigorous selection process and being extremely efficient in taking candidates through the stressful process in the shortest possible time.

MBA in Germany after 30 for Chartered Accountant

The first time I thought of doing an MBA was in the 10th grade in school. I had a clear inclination towards the commerce stream since I would deal with numbers/finance which I had a natural interest for and would have nothing to do with physics and chemistry.

And if you were in the commerce stream, at least during my college times, the most obvious options would be to either pursue Chartered Accountancy after the 12th grade or pursue an MBA post-graduation. I quite liked the idea of having 5 “good” years in college and then pursuing an MBA.

However, after 2 years of easy college life plus playing multiple frames of billiards/pool, boredom set in and I decided to enroll myself for the Chartered Accountancy course. For anyone who has done this course, knows what a life altering decision this can be.

By the time I completed the course, I was left a bit disoriented. It gave me a solid foundation on several financial concepts, but I figured I didn’t want to be an accountant or an auditor.

Financial constraints meant that spending an additional 2 years studying an MBA was not an option and I had to start working.

Post the course, I joined Siemens in the field of competitive intelligence. In the 10 years since, the last 7 of which I have spent in Germany, I’ve had the opportunity to work in 4 very diverse profiles.

Living in Germany not only helped me professionally, but also in my personal life.

I got myself involved in a global expat community, interacted with people from all over the world, founded a couple of groups which today have more than 500 members.

During this time, the thought of pursuing an MBA crossed my mind several times. However,I was very happy in my work life and the progress I was making in my career.

In the summer of 2018, I decided it was finally the right time to pursue an MBA. I was satisfied with my work life but being in my mid-30s, I realized I was running out of time.

While by now I was convinced that an MBA would be of great help to my career (I elaborate this in the end), I still had some questions, viz. full time or executive, tangible impact, etc.

This is when I got in touch with Sameer Kamat whom I knew from my time working in Siemens in India.

I had read that he had started MBA Crystal Ball and was getting rave reviews online.

Interacting with Sameer and reading the book Beyond the MBA Hype gave me great clarity on topics that I wasn’t completely sure on.

I decided that I wanted to do a one-year full time MBA from Europe with the intention of continuing to work in Germany post MBA.

I shortlisted 5 programs, 2 of which were German, 2 French and 1 Swiss. My preference was to get an admit from one of the German programs failing which I would look at the Swiss and French ones.

The Swiss and the French programs were ranked higher, but the German ones were better suited to give me a strong network within Germany and were also more affordable.

Having this shortlist in mind helped me work out a target GMAT score of 680-700.

A quick check of the admission deadlines meant I had 3 months to study and take the GMAT and then a further 1.5 months to prepare and submit my application for one of the German programs.

By now I had acquainted myself with the format of GMAT.

There were a lot of resources available online, but it wasn’t easy to figure out which one would be the best for my study goals.

Besides I had read stories of how some students were stuck in a loop of studying and appearing for GMAT and still not being able to get their desired score.

Again, an article on MCB written by Sameer listing the best resources for studying GMAT was of great help.

Verbal was my strength and though I had always been good with numbers, Geometry had been a nightmare for me during school.

I knew I had to first gain clarity on concepts which I might have learnt (or skipped) during school before I could go about learning to solve problems in a time restricted format.

My plan was to primarily focus on understanding the concepts from the Manhattan Prep Strategy guides and supplement it with practicing problems from the Official Guide.

I also enrolled for the 4 practice tests offered by the GMAT official practice. Another resource that I used for certain Quant topics was “Exampal”.

To summarize, I progressed from a 650 score in my first practice test to 710 in the last one.

During my GMAT preparation phase, I attended the open house for my two preferred German programs. Prior to this, I had put the two German programs on par, however, my experience at the two Open Houses was very different.

While I was left a bit underwhelmed in my interactions with one of the schools, my interaction with the current students, alumni and the admission manager of the Mannheim Business School (MBS) FT program combined with the course format, faculty and pedigree of the school convinced me that this was the right program for me.

This also worked well from a timeline perspective since the other schools on my shortlist had a deadline later than MBS. Thus I could focus all my efforts on trying to secure an admit for MBS.

Given my GMAT score, international experience and academic background, I felt I had a very good chance of securing an admit.

However I had little idea about what were the aspects that were of importance to be highlighted in such an application.

I decided to rely on the support of Sameer and his team in the application process.

My initial discussion with MG convinced me that I had made the right decision. He highlighted aspects which were super important for the application but which I had overlooked.

For example MG was convinced that my extra-curricular activities gave me an edge in my application, while I had mentioned them only as a passing reference.

Besides, by asking constant questions and details, he helped me structure my thoughts in the best possible way.

I submitted my application end of November and was promptly invited for the first interview round which was scheduled with the admission manager. Her questions focused around my work experience and motivation to do an MBA, why Mannheim Business School.

In the interview, besides the case study I was also asked about what I would bring to the class and what were my post MBA plans.

So around 3 weeks after submitting my application, and going through two interview rounds, I got the news that I had been selected to the program.

As outlined earlier, my experiences at the Open day and research on MBS convinced me that this would be the best school to further my career in Germany.

Therefore, I decided to not apply to any other schools.

For me, the entire journey from deciding to do an MBA to receiving the admit took about 6 months. Retrospectively would I change something or what would my advice be to a future applicant?

If you belong to the same demography as me, i.e. male, Indian, my advice would be start early. I believe I was amongst the last (if not the last) students to be selected from that demography.

Germany is becoming very popular amongst Indian students as a destination for MBA studies and with MBS having a class size of 55-60, diversity needs ensure that there are only so many places available for each demography.

I put in my application 10 months prior to the program start and this almost proved to be too late.

Also read:
– MBA after CA from IIM, ISB vs abroad
– Life as an international student in Germany and job after MBA
– Master of Finance in Germany (FSFM) vs Switzerland (St. Gallen)
– How this chartered accountant got into ISB with a low GMAT score of 600