Plot: A stock broker accepts the tutelage of a millionaire but unprincipled corporate raider to make it big on Wall Street.

Why is it here? The movie draws the curtains off the secrets and shenanigans of business. It shows how mottos like “Money is everything” and “Greed is good” can lead people to their ruin.

Plot: An HR executive travels around doing his job, which is firing people. But he has a sense of compassion, though a false one. He undergoes transformation when his own company grounds him.

Why is it here? An interesting insight into the world of human resource management and communication skills.

Plot: A researcher for a tobacco company who is involved in wrongdoing inside the company is faced with the choice of risking his life to turn into a whistleblower or keeping quiet.

Why is it here? Ethics and integrity are at the heart of business and personal conduct. As MBAs strive to become future leaders, retaining these values are as important as achieving targets. The Insider sends this message clearly. 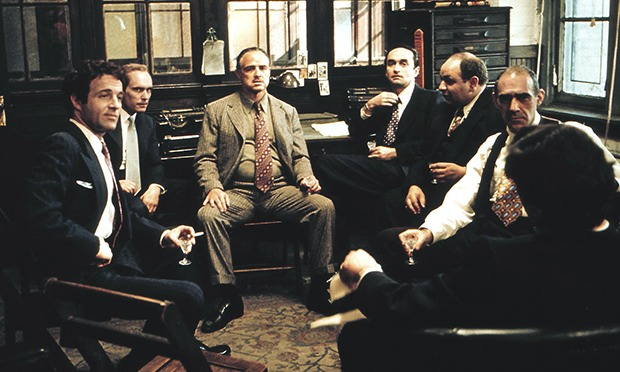 Plot: The Godfather, rated among the best films of all time, follows the tribulations of an Italian American family, Corleone, whose patriarch, Vito Corleone, rises to become the lord of American organized crime.

Why is it here? Godfather focuses on the importance of building and maintaining relationships and networks, and on how crucial strong leadership and good planning are to business.

Plot: Citizen Kane tells the story of the rise of a newspaper tycoon who loses his moral bearings in his pursuit of power. In a series of flashbacks, news reporters tries to demystify the tycoon’s dying words.

Why is it here? A classic, Citizen Kane warns of the dangers of greed and unethical business practices. It teaches the lesson that success can sometimes carry a heavy price tag.

Plot: A good-hearted man in despair is about to commit suicide. But his guardian angel appears and shows him what the world would have been like without him.

Why is it here? What happens to people whose only aim in life is to make more money? The film tells us that your job is not everything, and there’s a life to be lived and cherished outside your office cabin. In the end, family and friends are what are left.

Plot: Pursuit of Happyness (the spelling of “Happyness” is taken from a situation in the film) is based on entrepreneur Chris Gardner’s memoirs. A salesman struggles with homelessness while bringing up his toddler son. He takes up an internship at a brokerage firm hoping to get the one paid job at the end of the program. He sleeps in shelters to save money and provide better things for his son.

Why is it here? The story of Chris Gardner shows that determination can make dreams come true and that character and attitude are essential qualities for success.

Plot: Three workers who hate their jobs decide to challenge their greedy boss.

Why is it here? A hysterically humorous take on the typical daily office routine. Although it depicts IT workers, the film makes sense to anyone who has ever held an office job. It is a funny case study of office politics and poor management.

Plot: Harvard student Mark Zuckerberg creates the social network website that is now famous as Facebook but faces lawsuits filed by two brothers who claim Zuckerberg stole their idea. Zuckerberg is also accused of drastically diluting the stake of a co-founder during FB’s incorporation.

Why is it here? Perhaps, no business idea has taken the world by storm so hugely as FB. The film teaches the nuances of entrepreneurship and the growth of the world’s youngest billionaire.

Plot: The movie narrates the story of Preston Tucker and his revolutionary idea of creating a “car for the future.”

Why is it here? The movie further inspires those dreaming the American dream and people with the entrepreneurial spirit.

Back to School (1986; starring Rodney Dangerfield, Sally Kellerman; 96 minutes): A self-made millionaire goes back to school to prove a point and help his dejected son get through college.

Thank You for Smoking (2005; starring Aaron Eckhart, Cameron Bright, Maria Bello; 92 minutes): A satirical comedy about a Big Tobacco spokesman who uses his marketing and communication skills effectively to promote a life-threatening product while trying to remain a role model for his young son.

12 Angry Men (1957; starring Henry Fonda, Lee J. Cobb; 96 minutes): One member of a jury persuades the others to reconsider their opinion that the person on trial is guilty of murder. The film provides a thought-provoking study of group dynamics and behavior.

The Intern (2015; Robert De Niro, Anne Hathaway, Rene Russo; 121 minutes): A retired professional joins an online fashion company and teaches the CEO and her colleagues the value of experience.

Glengarry Glen Ross (1992; Al Pacino, Jack Lemmon, Alec Baldwin; 100 minutes): This film provides a fascinating insight into the real world of sales and what it takes to make it there.

The Wolf of Wall Street (2013; Leonardo DiCaprio, Jonah Hill; 180 minutes): The Wolf portrays the rise of a stock broker to great wealth and his fall to deep corruption and crime.

Enron — The Smartest Guys in the Room (2005; John Beard, Tim Belden, Barbara Boxer; 110 minutes): What really happened at Enron? See this documentary about how Enron’s corrupt business practices led to its fall.

Inside Job (2010; Matt Damon; 105 minutes): This documentary analyzes the systemic failures of the US financial services industry that caused the 2008 meltdown.

Barbarians at the Gate (1993; James Garner, Jonathan Pryce; 107 minutes): The president of a large tobacco company wants to buy the company but there are other bidders. Watch this film for a deep understanding of hostile takeovers and leveraged buyouts.

Norma Rae (1979; Sally Field, Beau Bridges; 114 minutes): A young single mother who works in a textile mill decides to help her colleagues unionize, despite the risks.

Jerry Maguire (1996; Tom Cruise, Cuba Gooding Jr., Renée Zellweger; 139 minutes): A sports agent develops a crisis of conscience and circulates a heartfelt memo to colleagues. He is fired but floats a company with only his secretary and one client, a football player.

Other Hollywood movies that deserve an honorable mention

Any other good ones that you’ve watched? Share the name and the reasons why you like it in the comments below.