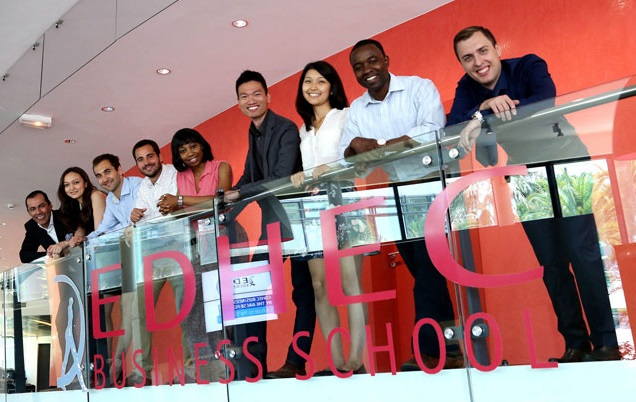 When you ask most applicants about the top MBA programs in France, apart from INSEAD and HEC Paris, another name that may come up is EDHEC. However, in comparison to the other 2 names, not much is known about the EDHEC.

EDHEC MBA student, Dipti Verma (name changed), was offered a 40% MBA scholarship by EDHEC based on the strength of her MBA application, despite scoring a 650 on the GMAT. That improved her RoI from the investment considerably. It allows her to experience Europe at a Financial Times Top-100 ranked business school without spending too much time worrying about the education loan (#73 in FT 2022 Business School Ranking).

She walks us through the entire journey in 2 articles – right from her EDHEC application process to her experience in the class.

How I got into the EDHEC MBA program in France

I was working in The IT services industry catering specifically to the digital automation projects. I had 4 years of experience and had progressed well to manage projects as a team/project lead. I loved the job and was dealing with various domains and roles throughout my experience and thus, didn’t even think of switching companies.

By the end of the third year of my job, the progress slowed and the addition to my learning curve required more to transition completely into a business role. This prompted me to get an MBA.

My GMAT preparation was not a long and tedious one. The first attempt was without much preparation and that was a fallacy. I realized that if I devoted a good amount of time preparing and then took the exam, it would be better.

So I tried again. But this time with a baggage of the previous bad attempt (another mistake) I ended with the exact same score.

I decided to move ahead with this score as I believed that a score was not all that defined me and my profile and essays if done well would get me the colleges I was targeting.

Choosing between business schools in Europe and USA

I followed a very simple strategy here eliminate first what you don’t want and then decide what you want. I eliminated all the two year courses (too long out of the job and too costly). So an MBA in USA was definitely not an option.

I had been to Europe before and had loved it for its teaching methods, so decided it would be the best choice to pursue an MBA.

Another fact that propelled me to be here was that I wanted to learn a new language and it can only be done if English was not enough to communicate with the locals. Thus, I decided on Germany and France.

For ESMT Germany, the biggest challenge is writing an essay in 100-200 words and it has a lot of those. I then focused on the average fee I was willing to pay.

Having a poetic bend at times I would also tend to be more flowery in my essays which thanks to Vibhav (my consultant at MBA Crystal Ball) I was able to tackle.

Also, I was venturing into a new field in which I had absolutely no experience and I decided I wanted to start and MBA right away. So I contacted a MBA Crystal Ball and seeked their initial free consultation with essays I had written and liked their no nonsense and straightforward approached. Voila!! That was it. After that everything was just lots of writes and rewrites and I was ready with the application.

The best part of the interactions was that I could talk about any and every doubt that I had and knew Vibhav would find out whatever he could regarding that. I usually research and find out about things on my own and can answer my dilemmas but that is very time consuming.

With MBA Crystal Ball even though I had only signed up for the MBA essay service I could rely on them to guide me through the application well too. Vibhav made sure I was direct and could tell my story in a way that another person could get it without much effort and would remember me for it. He even guided me in a way that the essays were written with the interview in mind.

For ESMT Germany, my feedback was positive but the interview would take place only if I considered joining in 2018. Which I was not so keen on.

For EDHEC France, it was a friendly interview where the interviewer focused more on knowing me and finding out about my personality and experience and checked if I was the person I claimed to be on my essays.

There was another round of video interview after that where I recorded my answers to the randomly picked questions. Each answer was 2-3 minutes long and the recording stopped as soon as the time was up.

I was initially shocked with my ESMT result but upon seeking feedback found out that I would be considered a good candidate for the 2018 session and it was only that I had applied late in the admission cycle.

So for international applicants, I would suggest that you make sure you apply early as MBA schools in Europe are trying to be a diverse as possible and thus have a limit on how many from a country / industry they will accept.

Secondly, don’t hesitate to ask for feedback even if they don’t specifically tell you that they give feedback. It is a great way to know if it was you application or other underlying factors.

I am not a person who accepts a win easily so as soon as I got my admission result from EDHEC Business School, I got into the mode of contemplating and deciding if I wanted to take the offer or not! Although I had already spent considerable time on deciding these schools.

After two days I was happy and excited!!! After all it was only after thinking a lot and measuring all the pros and cons that I had come to this decision.

Read these success stories of applicants who got into other top European programs:
– IE Business School Spain MBA admits an Indian entrepreneur
– How Savita got into the IESE Business School MBA in Spain
– How Shipra got into HEC Paris admit with Low GMAT score
– International student life in France at EDHEC
– Top Grandes Écoles in France: Ranking, costs, job placements and more