The number of Indian students studying in USA was 132,888 in the academic year 2014-2015. That’s a 29.4% jump over the previous year. Within this group, 64% of the students were enrolled in post-graduate (Masters level) courses.

Any guesses on how much money they added to the United States coffers? A cool $3.6 billion!

No wonder the international student recruitment strategies of many American universities focus heavily on India.

We thought those statistics are big enough to deserve a little analysis.

You may have come across important looking professionals proclaim – if economy goes down, folks move towards business schools. Some others might have heard the foreign exchange (forex) rate impacting a flux of candidates.

Is there real substance to such claims? Should you and could you predict the volume of candidates on the basis of some defining parameters – in turn, making your own decision making process more efficient?

We carried out a variety of statistical analyses to assess the veracity of some of these claims and more. So sit tight for some exhaustive chart reading with me here.

First up, we analyze whether the thing that gives governments and bankers, among others, cause of worry and bonhomie, the GDP growth rate, has also rubbed on to wannabe US students. 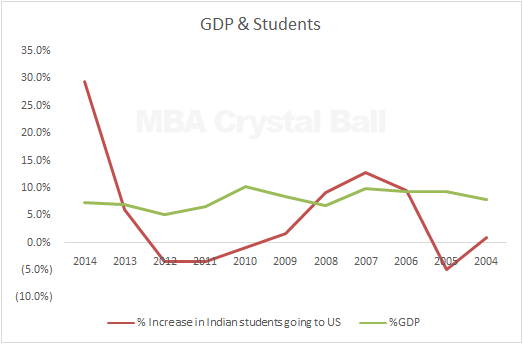 Much as the romantics might see the dance trajectory in the above squiggly lines, let’s take a deeper look to see some trends. There seems to be no apparent relationship between the two parameters.

The dip in GDP in 2008 seems to be sent some sort of shock leading to year over year decrease in growth of students going to the US and even de-growing between 2010 and 2012. This could be a bit of suspect though since the correlation seems to be a pretty weak one, if any.

And more recently, in 2014, the rate of student departure seems to have found a life of its own, unbeknownst to the GDP trend.

It can be asserted that, much to the chagrin of erudite economists that this defining statistic seems to have little, if any, impact on the humble students’ mind. Rightly so perhaps since one would rarely expect students to do such a detailed analysis or on the flip side, take a decision purely at such high level a parameter – something that would be akin to taking gut-based decision.

How many Dollars Sir?

The USD:INR exchange rate would surely play on the minds of students who are going to put their or their family’s heard earned money on the line. Unlike the GDP, this is something that directly impacts the pockets and worth far more attention. So let’s find out if this stacks up to the test of correlation. 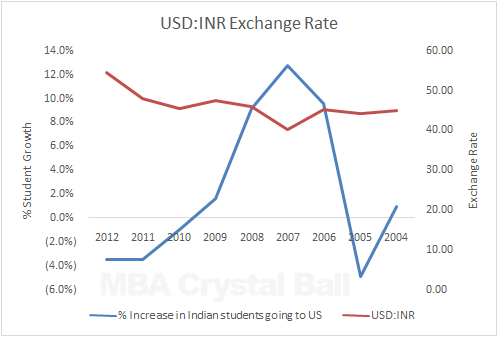 You’ll notice that 2007 was an interesting year, when the exchange rate dipped and this coincided with a spurt in the student growth rate. With the increasing exchange rate, the trend reversed thereafter and we see a loud and clear message emerging – exchange rates play a crucial role in deciding to go out.

Though we do not have the data, but this seems to have bucked the trend in the recent years where the exchange rate has continued its upward trajectory while the student trend has reversed.

Be that as it may, the exchange rate can really play havoc with your financials – the importance however is subjective. While the initial stab will be painful for most, but for those of you planning to stay back in the US for a while, this analysis soon becomes moot. This is because you end up earning in dollars too.

For those planning to head back to India though, this is a huge factor and you should try your best to get some handle on how this will play out in the coming few years.

H1B? Is that a new virus? What, it’s already over?

Those heading to the US for work are well aware of the three digit code, H1B – this is the category under which immigrant workers can work and earn in the US. Though it is the epitome of the land of limitless opportunities and free market capitalism, but everything has its boundaries.

In that spirit, the US government cannot provide a free run to immigrants, lest the locals be deprived competed of employment opportunities. In the recent times, additional checks and balances have been put in place after the introduction of a lottery system, making it difficult for immigrant students to find a job. Peeling the onion further, we go down to this parameter that is as closely linked to a student’s future as anything can be. 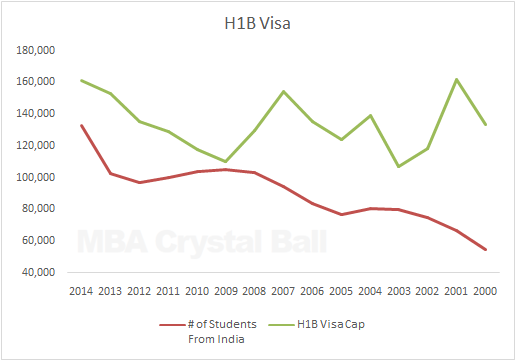 The H1B visa cap seems to yo-yo quite a lot, this shows that perhaps the US government is still finding its feet when it comes to taking a clear stand on the issue. Up unto around 2008, we see that there is a fairly wide gap between the two graphs and perhaps this wasn’t a major factor playing on most students’ minds.

Post that, the gap has been narrowing but the student growth continues its upward trajectory. The reason could be in the details. A student actually does not need an H1B visa right up; you start with something called an F1 visa. For those under STEM, there is another option of OPT.

For others, the H1B visa thing plays up only once you graduate. So many applicants tend to overlook this factor. The noose however seems to be tightening over the years and the US government seems to be taking multiple measures to stem the influx – recently the visa fees for instance was trebled, taking a toll especially on the Indian IT firms.

The overall situation is still not too grim though; plus trying to predict US Federal policy is like trying to determine whether it will rain on a given day during the Indian Monsoon – something that the most sophisticated models seems to not get a handle around. Our advice would be to keep a close tab on this one, but not to over-analyze the situation – at least not just yet.

As an end note, it is safe to say that high level macroeconomic factors have far lesser impact on an applicant mind than individual choices and preferences – something hard to capture with plain objective data.

Do you think there are other factors that may have a more pronounced impact? Leave a comment below and let us know.

10 thoughts on “Number of Indian students in USA statistics: Analysis”