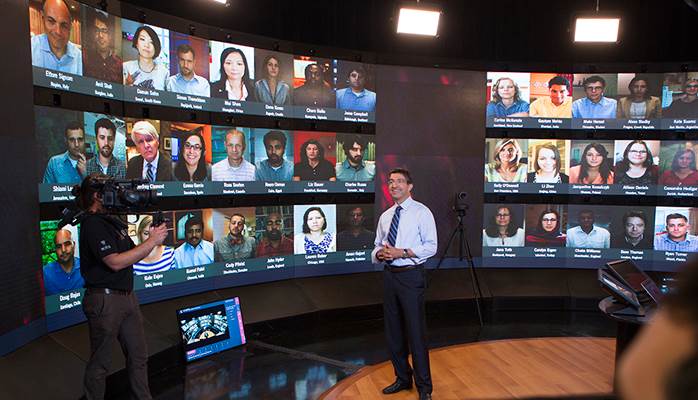 It made academia sit up and take notice when it launched as a beta version in June 2014. Some believed the ‘classroom of the future’ had arrived; others, at a loss for words, called it ‘reality TV’ in education. Most of all, this technological phenomenon had Harvard Business School (HBS) revelling in its own achievement.

Harvard’s online learning initiative broke all the rules. HBX Live, a component of the HBX initiative, has been creating quite a buzz. It is broadcast from a television studio, where Bharat Anand, faculty chair of the program, addresses a high-res video wall that contains the live images of the students taking the class. A futuristic, virtual classroom that brought students together, from all over the world, to take a Harvard-designed program in business – in real time.

Anand might as well be angling for an Emmy, for as his students register their virtual presence, he strolls around the studio, talking, moderating, tossing questions and facilitating discussions while a roaming camera captures his every move.

Virtually smashing through the clutter in the online teaching space, HBX CORe (short for – Credential of Readiness) is an 11-week, self-paced, pre-MBA program (150 hours) that provides a foundation in business. Consisting of three modules – Business Analytics, Economics for Managers and Financial Accounting – it aims to make you conversant with the language of business.

The technical wizardy used to deliver the course is jaw-dropping – it replicates the interactive nature of a classroom while also being engaging, vibrant and exciting – the USP of this course is that it is centred around HBS’s famed case-study approach to teaching, the biggest plus for those paying $1,800 for the program.

According to an HBX representative, “Under the umbrella of HBX, there are three learning models, or platforms: HBX CORe, HBX Live and HBX Courses. Though HBX has experimented with using HBX Live for a variety of purposes and will continue to explore how to best integrate Live with other HBX offerings, it is not a major component of CORe.”

Who is it aimed at?

HBX CORe was initially designed as a primer for candidates enrolled at HBS for its full-time MBA program. Its fancy price tag notwithstanding, it was pitched as boot camp for students whose academic background did not prepare them for a business education and who would be brought up to speed with those who did, so that they would not be overwhelmed by the rigorous MBA program.

An integral element of HBX CORe is the high degree of interactivity it introduces to online learning. Each 5-minute video that peppers the course is backed by the instructor calling upon students at random to answer questions – mimicking a classroom.

Students can also create profiles and ask and answer each other’s questions on discussion boards. At the end of 11 weeks, students take a 3-hour, computer-based exam at a designated test centre, and are assigned one of the following grades – fail, pass, honors and high honors.

Is the Harvard HBX CORe worth the time & money?

Being a Harvard-designed course, HBX CORe delivers on its promise to prep you in basic business concepts. At the end of a very intense 11 weeks, you will be fairly conversant with business jargon and able to communicate with peers and other professionals on an (almost) equal footing.

Since the course uses Harvard’s signature case study-based approach to learning, it gives non-MBA candidates a taste of HBS’s powerful, hands-on teaching methodology. It may not be a mainstream HBS program but HBX CORe does carry the ‘Harvard’ tag, even if obliquely, and for many that’s reason enough to sign up.

Those who have taken the course say it is packed with videos of professionals from the business world, which makes it very relatable. What’s more, the interactive platform is fun and keeps students riveted throughout.

And here’s the thing about the HBX certification. It is by no stretch an MBA degree but, unlike platforms like Coursera, you can include it on your resume. If you pass with ‘honors’ or ‘high honors’, so much the better!

What the naysayers say

The cynics call HBX CORe a cash cow packaged in slick and convincing marketing. By pitching it as a primer for students enrolled in an MBA program, any MBA program, they enjoy a dual advantage.

Pre-MBA students at Harvard are more likely than not to take the HBX course, while students enrolled with an MBA program elsewhere but who also take the HBX primer become social ambassadors for the ‘Harvard’ brand. And we know just how powerful ‘social’ is as a marketing tool today.

The HBX catchphrase is, well, very catchy: ‘CORe can make sure you’re ready to contribute (to the MBA program) on day one.’

Then, realizing late that there may be a bigger market waiting to be captured, HBX made another pitch. It no longer aimed at ‘pre-MBA’ candidates but also at any and everyone starting their careers. Emphasising the ‘universal’ nature of the course, they suggested that all young professionals would benefit from it.

While there’s nothing wrong with selling an educational program with slick marketing, guard against getting overwhelmed by the ‘Harvard’ tag. Critics point out that the course is not selective or exclusive enough, with only 15 per cent applicants being turned down, mainly because their application forms were not filled out properly.

Also, the course holds little value in terms of leverage in the real world. While apt to mention on your resume, it will not earn you any brownie points during recruitment interviews.

Finally, HBX CORe simply does not give you the networking and career opportunities that you get from a full-fledged MBA program.

Harvard is not pitching the HBX CORe as a substitute for an MBA program; only a supremely engaging and very enlightening introduction to business.

So if you think you will benefit from enhanced business knowledge and can afford the price tag, it could be a good investment.

In contrast, if you are looking for a solid time-tested qualification with a measureable career impact and proven RoI, this may not be the one for you. Skip the excitement and stick to the boring traditional degree.

Read these related posts:
– Harvard online certificate courses (Interview with HBX Executive Director)
– Indian applicant who rejected the Harvard MBA admit
– Which MBA program beats Harvard MBA in value
– Harvard may not be the best MBA for you

8 thoughts on “Harvard HBX CORe Review | Worth it or not”