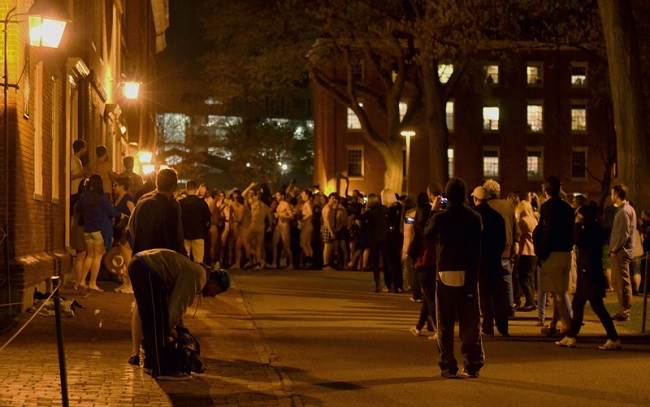 Nudity, public humiliation and booze (lots and lots of it) are the unholy trinity at American colleges, where overenthusiastic students believe that making the grade is simply not good enough.

‘If you’ve made it this far, let’s see how much further you can go’, appears to be the cruel reasoning behind a painful rite of passage newbies are subjected to by their seniors, soon after they step onto college campuses.

Also known as ‘initiation ceremonies’ or ‘ragging’, these practices are old hat – but no laughing matter if a hat is all you’re wearing while being forced to mock-propose to a fellow female student, drunk and pleading for mercy, in front of your entire class.

These rites of passage grabbed made headlines in late 2015 when ‘PigGate’ broke, much to the embarrassment of British Prime Minister David Cameron. A biography released by a miffed fellow politician revealed an alleged incident that involved a part of young Cameron’s anatomy and a dead pig’s mouth when he was a student at Oxford University.

In this instance, the intended political fallout was probably more serious than the alleged act itself but the truth is, initiation ceremonies range from downright hilarious to dastardly criminal acts.

So, if freshmen are publicly paraded after being forced to wear grocery bags over their heads, practices that involve alcohol and bodily fluids can be disgusting, while still others, like sexual crimes against female students, could get the perpetrators put away for a really long time.

Considering just how bizarre these practices have become, it might be hard to believe but initiation ceremonies have a good side too. Intended as a rite of passage, these ceremonies are meant to serve an important social purpose.

Although we fail to see how downing a concoction of dog food, anchovies, raw eggs and goldfish could serve any purpose at all – as happened at York University – initiation ceremonies can break the ice both vertically and laterally among the student pecking order.

But this ‘breaking in’ could quickly become ‘breaking bad’ when the initiation rituals turn sadistic, brutal and abusive – and they often do. Take the case of an 18-year-old male student of Exeter University, who died during a round of ‘pub golf’ a few years ago. One can only imagine what the ritual involved and just how much alcohol the teenager had been pressured to drink, to make him keel over and just die.

The question therefore is: do these degrading, cruel and sometimes inhuman acts appeal to the dark side of human nature? Why else would someone derive pleasure from inflicting psychological and physical pain on another human being? Why would a student at Oxford be told to spike his dates’ drinks and bring back a positive pregnancy test – and ‘keep trying till you succeed’?

Some believe older students are avenging themselves for initiation ceremonies they were once subjected to. Others believe a ‘system of punishment’ for rule-breakers keeps the group or class ‘cohesive’ by strengthening the ‘we’ feeling!

Sadly, some point out, these initiation ceremonies have long since lost their purpose and have turned into monstrous acts that feed ‘hypermasculinity’. And the pressure to participate or succumb is huge.

Such is the need to ‘fit in’ that freshmen are prepared to roll around in each other’s vomit and urine, and drink alcohol shots through tampons, just to feel accepted.

When they reach this point, their ability to gauge when their tormentors have crossed a line is compromised and many find themselves in a dangerous predicament – all this so that they are not branded as geeks or dull and boring.

Certainly not the preserve of business schools alone – although they are just as rampant on these hallowed campuses – some of these ceremonial rituals are as sacrosanct as the institutions themselves.

Now this may not be an initiation ceremony but the Primal Scream is an annual streaking tradition at Harvard University that the students observe very religiously.

Every semester, just before the final exams, students streak across campus, running a minimum one lap. This rather odd tradition – what’s the connection between streaking and exams? – has an interesting predecessor, where in the 1960s, at the midnight hour, students would stand at their windows and holler for 10 minutes – the ‘primal scream’.

It was a good stress-buster that marked the end of their study period before the exams. With students approaching their tolerance limits before the exams, this practice allowed them to let it all out. How the tradition made the transition to streaking is not clear but it explains the nomenclature.

Coming back to bizarre initiation rituals, MBA students would do well to remember that in a day and age where social media has robbed one and all of every last shred of privacy, it is perhaps better to say ‘no’ and risk being labelled a spoilsport than being pressured into taking part in any questionable practices.

Evidence of these always end up on the Web. Prospective employers and recruiters now scrutinise your digital footprint for evidence of posts and images that suggest you are a dodgy candidate – and, no, even genius scores won’t save you. Managers are supposed to be made of sterner stuff!

2 thoughts on “Bizarre Initiation Rituals in the Top Universities”