[Editor’s note: Don’t miss the new section towards the end, where we reveal the results of a GRE vs GMAT survey that we did in May 2021.]

With an increasing number of B-schools accepting the GRE exam scores, candidates with vague post-graduate plans may wish to opt for the GRE rather than the GMAT. This would enable them to go for an MBA or an M.S., dual degree program or even a Ph.D. Taking the GRE would widen their scope of post-graduate study options, so such candidates may feel the GRE a better and practical test option.

But what about candidates who wish to apply only for an MBA program? Should they even consider the GRE or straightaway take the GMAT? It’s worth discussing how the GMAT and the GRE differ in nature and the advantages or disadvantages of opting for either.

Our best admission consultants get the same question day in and day out. So we thought an article would help sort things out.

What triggered the GRE vs GMAT race

It’s good to start off with some background and historical developments.

The story dates back to 2006 when GMAT owned by GMAC (Graduate Management Admissions Council) which had partnered with ETS (Educational Testing Service) all the while to manage their tests decided to part ways with ETS and instead made a new contract with ACT-Pearson as reported on The New York Times.

ETS which already conducts the GRE, now started making attempts to capture another big market by convincing business schools about accepting the GRE score on the grounds that they would be able to widen and diversify their applicant pool. In fact the changes that took place in the GRE test format in August 2011 were made to make it more relevant to business schools.

On similar lines, changes in the GMAT in June 2012 brought into the picture a new section, the Integrated Reasoning to make the test more b-school friendly. As more and more schools start accepting the GRE score, the competition between the GMAT and the GRE is set to get tougher.

Choice of MBA programs that accept GMAT vs GRE

If a candidate is definitely going for an MBA, taking the GMAT would be an advantage. This would increase the options of business schools they can apply to.

How the colleges would view it?

The time-tested GMAT score has been considered a better indicator of a student’s capability and preparedness for a tough MBA program. This opinion would greatly vary, so candidates need to check the college website to see if they encourage candidates to submit the GRE score or not.

Read this interesting observation on the average GRE scores for top MBA programs at business schools.

A few industry recruiters take into account the GMAT scores. Especially for those applicants wishing to move into investment banking and management consulting, having a high GMAT score would prove to be an advantage.

In fact, many deserving consulting and banking aspirants fail the eligibility test for the elite consulting firms and investment banks, for the only reason that they don’t have a high enough GMAT score to clear the first hurdle.

Difference between GRE vs GMAT syllabus

Though there are similarities, there are also differences between the GRE and GMAT syllabus. Don’t make the mistake of assuming that studying for one will prepare you for the other.

There may be candidates who in spite of repeated attempts at the GMAT may not be able to raise their scores or whose performance in the GMAT practice tests may not be up to the mark, so they may have got discouraged from taking their GMAT.

If such candidates find that their performance in the GRE far exceeds that in the GMAT, they may be able to submit their GRE scores. Such applicants need to check if the schools they’re interested in accept the GRE scores and whether the GRE score are considered at par with the GMAT score.

GMAT or GRE for Engineers: Which is easier?

The GRE has a greater focus on testing verbal concepts, including the need to have an expanded vocabulary of difficult English words. Many non-engineers prefer the GRE exam. You’ll also come across many engineers who prefer using the GRE score that they used for their masters (MS) admissions.

But don’t rely on these generalisations. It’s best that you look at a few sample questions for GRE and GMAT. Compare the GRE syllabus with the GMAT syllabus. Then decide for yourself if the GRE or GMAT is easier for engineers.

How do you know whether a specific GRE score is better than some specific GMAT score? if you have a GRE score and a GMAT score, which one is stronger?

It might seem as if we are talking about comparing apples to oranges, right?. B-schools that accept both might have the same question.

ETS provides a tool that facilitates GRE to GMAT conversion. However, whether bschools use this or have their internal process of comparing GRE to GMAT scores is an open question.

Did you face the GMAT vs GRE dilemma? Which test did you choose and why?

Eight years after we published this article, we’re still getting questions from applicants on which test works better. So we thought why not put the question back at them to find out what they’d prefer.

We posted a poll on our social media channels (LinkedIn and Youtube). We got over 3,000 responses making it a statistically significant sample size.

Since the discussion started almost a decade back, one would’ve expected a close fight between the two biggies. But the results were surprising.

GMAT still beats GRE hands down in the MBA race!

The results across the two channels were fairly similar.

The bottomline – 4 out of 5 applicants expressed a preference for GMAT over GRE.

It appears like GMAT, the big daddy of management exams, continues to have a strong support among new applicants. So GRE will have to work harder to expand its footprint in the management education space. 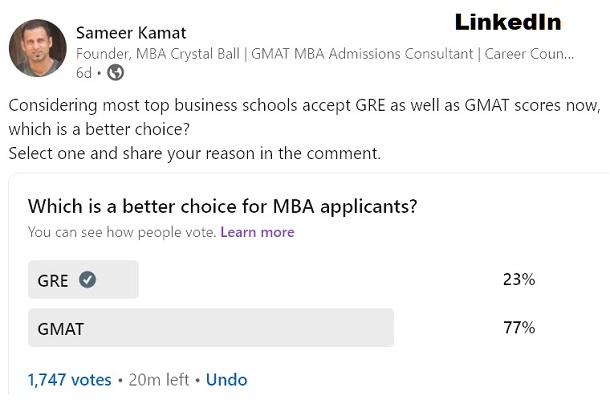 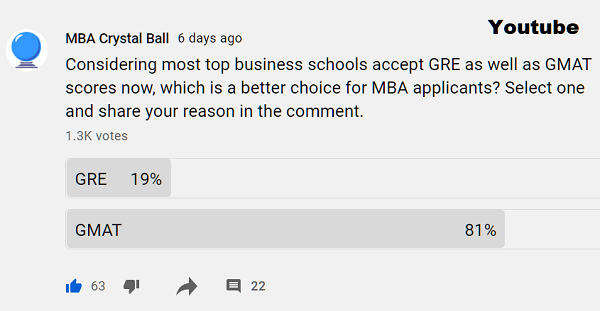 Going beyond the objective data, if you’re curious to know the qualitative reasons behind the responses, here are some representative views shared by the survey participants.

In favour of GMAT

I will go with GMAT. GMAC has tracked academic performances and career progressions of many high GMAT scorers after the test was established. Their research has shown a strong correlation between a high GMAT score and a strong MBA performance/post career progression. GMAT has proven to be a very reliable indicator of a candidate’s future potential and it’s for this reason that schools value this score a lot!
– Shardul Pendharkar (India)

On the difficulty level

I’ve written both exams and I can tell you the GRE Quant is no longer as easy as it used to be. The difficulty level has increased, though it’s still not as rigorous as the GMAT Quant. So the conclusion is if you can score a 90th percentile on the GRE Quant you can do almost the same with the GMAT.
– Abdulmalik Abdulraheem (Nigeria)

In support of GRE

GRE in my opinion, because of its non-adaptive nature. You just have to perform well in the overall section and have the flexibility to skip. However if you are fine with the adaptive approach then I’d say, go with GMAT (especially engineers), as GRE verbal could be enigmatic. Regarding quant I agree with other comments, it’s not that easy anymore. If GMAT quant is 9/10, GRE is definitely 8/10.
– Archit Aggarwal (India)

I think it depends on the applicant. The GRE is biased in favor of people with qualitative/social sciences backgrounds, and the GMAT privileges more quantitatively-oriented applicants. I also think we need both types of thinkers in business schools and in top management positions afterward: management is a messy business of numbers AND people, after all. Accepting both tests helps ensure that we have paths for each type of applicant!
– Andrew Foley (USA)