Porter’s Five Forces is a tool for evolving business strategies on the basis of the nature and level of competition in an industry.

The name comes from Harvard professor Michael Porter and the “Five Forces” concept that he devised for understanding the competition in an industry and, therefore, its “attractiveness”—the ease with which profits can be made in the industry.

Put another way, Porter’s Five Forces concept helps understand where “power” lies in a given situation—the analysis tells you where you are in relation to your competitors, and ultimately, the chances of your own profitability in your business situation compared with those of your rivals.

It is used both by new entrepreneurs planning to enter an industry and by established corporations reviewing their sustainability in a sector.

The five forces that influence a company’s performance in an industry or business situations are:

This is depicted in further detail in the template below. 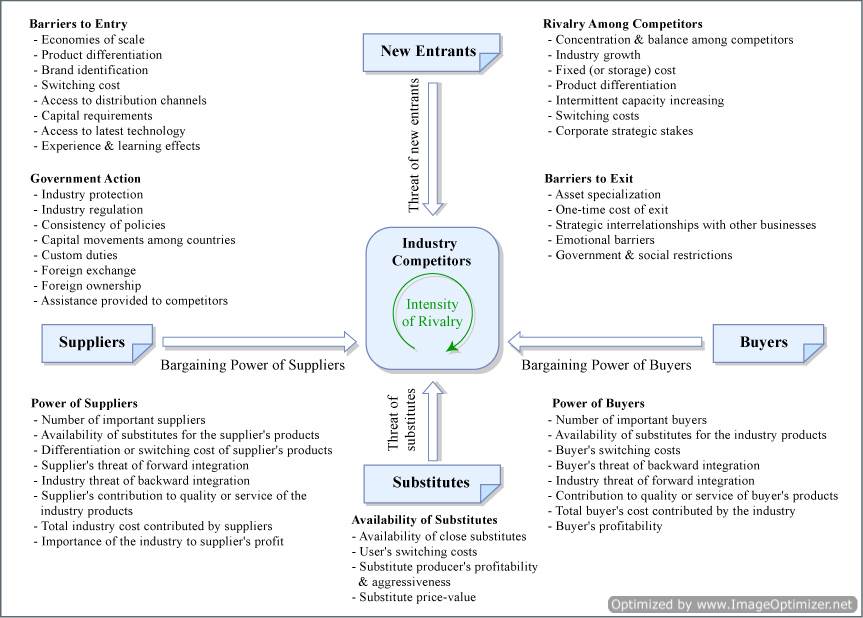 To understand the impact of Porter’s Five Forces model, let us now look at each of the forces as though it is acting on a particular industry, say the fast-food industry of burgers, pizzas, and sandwiches.

The buyers have high bargaining power in a place where there are many fast-food joints, as they can choose any one of them.

For example, if the queue is too long at one outlet, the buyer can probably go to another outlet just across the road. The determinant of the high buyers’ bargaining power, in this case, is the high number of sellers to cater to the buyers. But the high bargaining power of the buyer is a disadvantage to a fast-food restaurant operating at the place.

The main suppliers in the fast-food industry are dough, dairy produce, and meat vendors. Their bargaining power is low since there would be a number of suppliers of these items.

The determinant of the low suppliers’ bargaining power here is the lack of differentiation among the suppliers’ products (the existence of a number of reliable suppliers). So, this is an advantage for a fast-food outlet or chain.

The industry is chock-a-bloc with competitors—there are big brands such as McDonald’s and KFC, and medium and smaller brands, including local restaurants and bakeries, selling a variety of snacks and quick-eats.

The determinant of the high competition is the high number of eateries selling quality products. This situation is a disadvantage to a fast-food eatery.

(4) The threat of substitute products

Restaurants and other eateries are quite capable of selling the types of products sold by a fast-food joint, such as a burger or a sandwich. So, the threat of substitute products is quite high for a fast-food restaurant.

The determinant of the high threat of substitutes is the lack of differentiation among the products available (except perhaps in the case of McDonald’s or KFC, whose products are seen as unique)—obviously a disadvantage for a fast-food outlet.

(5) The threat of new entrants, or barriers to entry

An entrepreneur requires a complex set of permissions to open a restaurant. In addition, good infrastructure needs to be built up. Then there is the task of creating unique products to set apart the restaurant from its competitors, which may include multinational chains.

Any businessperson would baulk at the prospect of entering this business. The determinant of the low threat of new entrants is the requirement of a number of permissions (tough barriers to entry) and the established products. Therefore, this is an advantage for a fast-food joint.

From the analysis above, we infer the following scenario of competitiveness in the fast-food industry:

There are two advantages compared with three disadvantages. Therefore, unless a fast-food eatery is able to create unique products and develop a reputation for service and hygiene, it will soon go out of business.

The Porter’s Five Forces analysis indicates a high level of competitiveness and a low level of attractiveness for the fast-food business.

Porter’s Five Forces, by helping evaluate the competitiveness in an industry, enables companies to come up with strategies to reduce buyers’ and suppliers’ power, reduce competition and the threat of substitutes, and stop the entry of newcomers. Changes in any one force will compel companies to reassess their market situation.

The Five Forces model is also useful for understanding why high profit is the rule in some industries, while huge losses are the norm in some other industries.

For example, in the soft drinks industry, Pepsi and Coca Cola are able to sustain profits, whereas airlines face a perpetual struggle to come out of the red. Why?

A Five Forces analysis of the two industries would give many reasons.

Just a couple of them here:

(1) while Pepsi and Coca Cola do not face much buyer threat (the millions of customers have little individual influence on the business), buyer threat to airlines is high (lower fares can take away customers);

You can yourself find the determinants of each of the five forces in any industry and the impact of the forces by using the framework below. The model can also be used to look at personal situations—for example, a career change.

The Five Forces model was conceived by Michael E. Porter of The Institute for Strategy and Competitiveness based at the Harvard Business School.

Porter, who presented the model in his work Competitive Strategy: Techniques for Analyzing Industry and Competitors, developed it because he felt that the SWOT (strengths, weaknesses, opportunities, and threats) analysis was not specific enough for the requirements of industry.

There have been criticisms of the Five Forces model from economists, who put forward examples of other forces that may affect an industrial scenario, such as government regulations.

Porter implicitly dismissed these criticisms, saying that these were not “forces” as such, but only aspects that affected them.

Business managers use the Five Forces model mainly to initiate an analysis of competitiveness. They depend on other frameworks to develop their strategies.

All said, the attractiveness of an industry to a company depends on the type and quality of the company’s organisational and financial resources. In the corporate jungle, it is the fittest that survives.