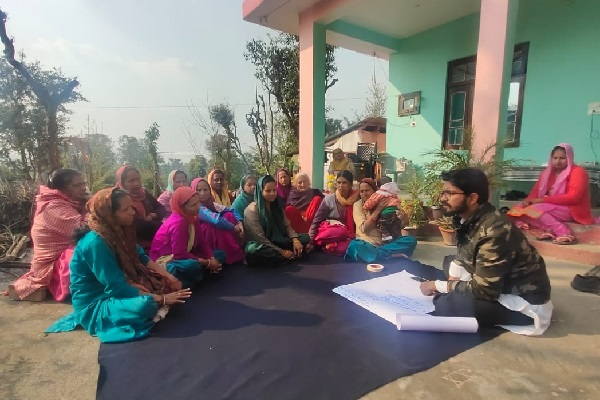 MBA applicants sometimes worry that they cannot win admission to top MBA programs because they don’t have the “right background,” like a job at McKinsey or Goldman Sachs, or a degree from a top university, whether an Ivy League college in the US, or an IIT in India.

Although MBA programs do admit many students from prestigious feeder institutions, they also admit candidates who simply inspire them, even if those backgrounds are way outside the usual – like Nitish, who spent his pre-MBA career doing social work to benefit marginalized women in India.

Nitish did a great job of telling his story, and has been gracious enough to share both a short version of the personal story that he used in his applications, and a few comments about his experience working with us on his MBA applications.

Congratulations Nitish on your acceptances to the MBA programs at Wharton, Kellogg (with the full tuition Austin Fellowship), Columbia and Yale!

We believe in your commitment to improving India.

Why I turned down a Kellogg MBA admit with full scholarship

My family comes from a small, poor village called Dumahi. We have seen numerous indignities of poverty from up close.

My parents wanted nothing more than to break the chain of poverty and sacrificed every other need in order to send us to posh private schools with strong academic programs.

There, my sister and I experienced first-hand the yawning differences between the poor and the affluent.

On the one hand, we were friends with children from affluent households. On the other, we saw our parents work hard to make ends meet.

Our friends complained about parents who would not take them out to watch the latest action movies, while we were eating a loaf of bread for dinner because we ran out of cooking gas.

But as I received good grades those concerns receded and my goal came into focus. It was the same as any middle-class child in India: pass the national exams to become eligible for the best engineering or medical colleges.

Because I was good at Math, Engineering seemed like the right path, and I was in the 99.98th percentile in the All India Engineering Entrance Examination, allowing me to enrol in a great Computer Science program, the first step towards financial security.

After this I secured an internship at DreamWorks India. It was the most fun I have ever had on a job. I was able to convert the internship into a fulltime job offer.

Although it offered a considerable sum of money and hence financial security, I felt the job mocking me. I realised that although I had escaped poverty due to my parents’ sacrifices and a few lucky opportunities, most of the country is not so lucky.

I realised I needed to work to improve the lives of other people who are fighting poverty, people who may be in villages even worse than Dumahi, where my father grew up.

I finished my Masters course requirements, but declined the DreamWorks job offer.

Instead I volunteered for a few NGO’s near my university and eventually started working for a non-profit in eastern India called the People’s Action for National Integration (PANI).

At PANI, I chose to work on projects aimed at empowering women, which I saw as the most important developmental issue facing India.

My mother was a highly educated and empowered woman who nevertheless had to give up on her Ph.D. studies because the family couldn’t afford childcare.

Moreover, I had observed how my mother was treated when we visited our grandparents in Dumahi.

She was expected to wear a veil reaching down to her shoulders, so she couldn’t see more than other people’s feet, let alone leave the house. Even inside the family house she wasn’t allowed to speak to other adult men.

And this was nothing. Other Indian women have it even worse, with evils like female foeticide, dowry deaths and honour killings.

One of the first projects I worked on at PANI was helping victims of sex trafficking to find alternative employment. Women engaged in sex trade face numerous challenges.

First, the government denies their existence, and therefore offers them no benefits or regulatory protections.

Second, their income decreases as they age.

Often, even their own families reject them at this point, and this reduced income can lead to their daughters being forced into the same trade as the last remaining way to make a living.

By collectivising thousands of Lucknow’s sex workers into joint liability groups and training them in basic financial literacy, I helped them create microbusinesses in areas like bamboo handicrafts and tailoring, which not only replaced but even increased their income.

They became more confident than before and were no longer thinking like victims but entrepreneurs, succeeding even when the government’s welfare programs had abandoned them.

My personal dalliance with poverty as well as my experience working in the non-profit sector has convinced me that government welfare and philanthropy can only do so much.

I want to use an MBA to venture into strategy consulting and use that as a “finishing school” towards social impact consulting.

Ultimately, I want to return to India to start my own social venture to connect women artisans from rural and indigenous communities of India to the global markets.

The application process was a different ball game. Early on in the process I realised that even though I had an above average GMAT score of 760, I would still need some help.

I did not have the first clue about which schools to target. My story needed targeting. I also needed to polish myself for the interview process.

This was again a tough choice for me as most Indians across income brackets would find Menlo’s fees steep. However, the kindness and sensitivity with which David spoke to me without losing professionalism touched me.

My best friend came to my rescue and offered to loan me the amount. With his help I was able to avail David’s services. I wasn’t disappointed.

David is one of the most successful consultants in the business. However, he does not have the airs or the impersonal attitude one’d expect. Instead, I found his to be the best guide, balancing candidness with warmth.

His approach is very structured. He uses Basecamp for collaborating which is a very intuitive platform to organise deliverables and monitor progress.

We began by assessing why I wanted an MBA. Following that was a discussion on choice schools, splitting them into stretch, target and safe, and figuring out the GMAT score to target for the bouquet of schools.

He is very particular about covering all the bases for a comprehensive application. He pressed me to attend as many info-sessions of various schools held near me as possible to help show the schools adequate interest on my part.

David took the time to hold detailed conversations about my life story, to help me figure out which aspects to put in the essays. He was very patient, yet thorough in the entire exercise.

He showed remarkable sensitivity and understanding in structuring my story despite being unfamiliar with most of the rural, lower middle class Indian cultural mores.

He advised me on the post-MBA career choice as well, keeping in mind my professional and academic background.

Since David has been in the business for so long, he is connected to many successful MBA candidates in various industries.

He ensured that I had access to his network, connecting me to many candidates with similar pre and post MBA career trajectories.

Schools need to see how realistic candidates are about their post MBA career paths. To that end, David helped me connect my current job skills to my post-MBA goals.

Our subsequent discussions were tailored according to the demands of each school. We went back and forth multiple times for each school, till both of us were satisfied with the essays. His turnaround times are easily the shortest across the board.

He prepared me for interviews as well by not only holding numerous mock sessions but also having me work with a theatre coach on voice exercises and presentation. I think it were these subtle things that made me stand out amidst the crowd.

With his help I was accepted into Columbia, Yale, Kellogg, and Wharton. I was also awarded the prestigious Austin Scholarship at Kellogg.

I still chose Wharton over the others. Apart from this being an emotional and personal decision, I believe, in the career path that I envision for myself in India, Wharton will help me better than another school.

As I prepare to step into this new shimmering world, I only wish to not forget the place I hail and wed both to contribute to making our society equitable.

About Menlo Coaching: Our team of expert MBA admissions consultants helps you push for more, find your voice, and tell your story in the most compelling way possible. We help current-year and future-year applicants to top MBA programs. Start your journey to MBA acceptance at Menlo Coaching.

4 thoughts on “How I got into Wharton, Columbia, Yale and Kellogg (full scholarship)”