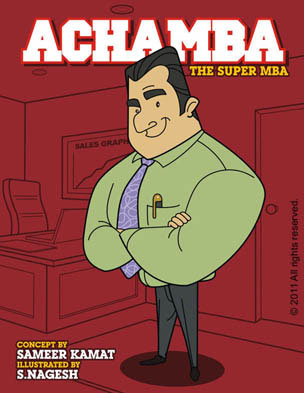 Accidental MBA and reluctant entrepreneur, Achamba, has announced the launch of what he thinks is the best MBA entrance exam in the world. It has been tentatively christened as the Kick-a$$ Management Aptitude Test (KaMAT®).

“This is what business schools really need,” said Achamba in a recent press meet that was attended by 1 TV star, 3 locals (who asked if there was free food, and then left) and 1 journalist from The Disturbing Times.

Here are the key points from Achamba’s speech at the star-studded event.

On the aptitude test format
“Who cares if you can solve quadratic equations and probability problems? Companies aren’t looking for human calculators. And what’s the point in testing subject-verb agreement rules? The language of business is money, not English.”

On the exam fees
“I think Free Basics still has a place in business. I am investing in people here. Before starting the gruelling 6-hour exam when test-takers are most vulnerable, we’ll have a little (pre-clicked) check-box in the T&C that’ll give us the right to get 10% of the test-taker’s future salary till perpetuity.”

On industry relevance
“Some employers have said they wouldn’t mind recruiting employees purely on the basis of their KaMAT® scores. It won’t happen overnight, but gazing into my crystal ball, I do see an MBA degree killer in the making.”

On the exam requirements
“No special preparation is required. We will provide the computer and the lie detector during the test.”

Reactions from the higher education industry

What business schools are saying

“Our MBA graduates were unhappy as their test scores were working against them during placements. Their excellent verbal skills were being appreciated only by niche businesses (like admission consulting companies) that rely on writing skills. Now with this new exam, we can place our students in a real job.”

What MBA recruiters are saying

“I cracked the sentence correction section during my MBA preparation days, but what was the point? I still had trouble completing my (prison) sentence,” mumbled Mr Chokinsey, former partner of Chokinsey & Company, as he reviewed his legal bills. “MBA exam scores don’t correlate with career success. If you can’t trash them, I suggest adding this one meaningful question to the test that recruiters like me can use – Are you an outsider or an insider?”

What Test Prep Companies are saying

“It’s a thrilling moment for the test prep industry. This new MBA entrance exam raises my hopes – of growth, profitability and a new BMW. We have already published some testimonials of KaMAT® toppers who we have helped over the last 3 years,” said Mr Parlok Nath (owner of Guru Ghantal Academy, Adhaar Card Number 3883 7527 9542, Blood Group B+ve) on the condition of anonymity, about the exam which is yet to be released.

Sample questions from the KaMAT®

Try out these sample questions from the KaMAT® to know if you will do well on the new test and eventually become successful in business school and beyond.

Which bird/animal do you feel closest to?
A. Turkey
B. Unicorn

Q. Use the word ‘ethics’ in a grammatically and logically correct sentence.
A. Ethics is very important in business.
B. In the Oxford dictionary, ethics comes after business.

Q. What business improvement suggestion would you give to a CEO?
A. Take care of your employees.
B. I’d strongly urge you to professionally productivate standards compliant e-commerce. It would be imperative to ergonomically exploit plug-and-play testing procedures. It’s high time you started to proactively mesh mission-critical metrics. Your company needs to compellingly architect synergistic information.

[Skip this if you chose answer B in the previous question]

Q. Which of these software tools do you use the most?
A. Microsoft Excel, Powerpoint, Word
B. The Leadership Quotes Generator

If you chose answer B in over 75% of the questions, well done you business wizard!

If you scored between 50% and 75%, don’t despair. You can still be trained to alter the psychological blocks that stop you from doing well in business.

Those who score under 50% will make perfect fodder for the higher scorers to consume once they get graduate from their dream universities.

Good luck with your KaMAT® preparation!

An appeal: Till we raise some venture capital funding, we’ll continue to grow our question bank via crowdsourcing. If you’d like to suggest questions (and sample answers) to be included the test, please post them in the comments below.