It’s not very often that you hear of an MBA application and profile crafted by the applicant so effectively, that the interview ends up being a formality. Even if the Admissions committee is convinced about an applicant, they normally follow the protocol and communicate the decision after a few days.

Harsimrandeep Singh, an oil and gas professional, had a different experience. Three minutes into the interview, he got a ‘Welcome to ISB‘ greeting from the interviewer who then spent the rest of the time talking about more interesting things in life – like what makes Punjabi NRIs so successful across the globe. 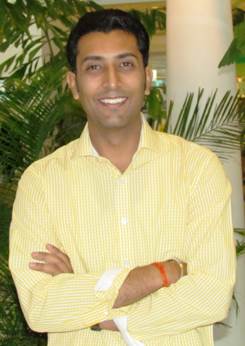 In 2008, I finished my engineering degree from NIT Jalandhar and started my career in rough world of oil and gas exploration. I joined as a wireline logging engineer for Halliburton Logging Services Asia.

The job description involved searching for hydrocarbons in oil rigs and drilling ships. Someone who might have seen the movie “Armageddon” might get a feel of what we do.

The job had many attractions like independent location management role, team leadership, meeting new people every day, travelling and working in exotic locations and literally arming and defusing bombs. But the most satisfying attraction was the fat paycheck I got at the end of each month 🙂

Though my career progression was going smoothly, after some years it all seemed to be a routine. Handling same kinds of projects everyday had made my work dull. To get a new experience, I switched country and got a similar role in a Kuwaiti Company.

But I did not feel any challenge here as well. The only saving grace was fatter pay check. I could not imagine myself working in same industry till I get old.

To cut long story short, I was looking to change my career sector. A senior of mine, who had faced the same dilemma, acted as a mentor for me and guided me in this phase. Just like him, I decided to pursue MBA and enter into strategy consultancy.

In 2013, I gave GMAT on an impulse and got a decent score of 730 without any preparation. For an Indian engineer with a good academic background, GMAT quant is not a challenge at all.

The big hurdle for Indian applicants, especially from small towns with little exposure to English, is the verbal part of GMAT. But since reading books by English authors had been my hobby since childhood, I was able to satisfactory handle this section also.

After my GMAT result came out, the next thing to choose was the college. I was overwhelmed by the number of colleges to choose from. I decided to work with a consultant to guide me in this.

After searching on net, I chose MBACrystalBall, basically because of the testimonials on the site.

Working with Stanford MBA grad – Ankur on essays was an extremely satisfying experience. His feedback inputs were quite thought provoking and they made my essays more wholesome and coherent. I was ready to apply to colleges by end of 2014.

But I unexpectedly faced a setback in professional life. Oil prices crashed and I lost my job. Since I did not think it wise to apply while I was out of the work, I decided to first get another job and then go for MBA applications.

I got a job back in March 2015. I also gave GMAT again with a little bit of preparation and was able to improve my score to 750. I again started my essays in August 2015.

The most beneficial aspect of my interactions with MBA Crystal Ball was that it helped me to understand the viewpoint of a MBA admission officer and what they were looking for. This enabled me write my essays again without need of any consultants.

I applied to four colleges: ISB, Oxford, McCombs and ESADE. I got interview admit from all of them. Understanding viewpoint of admissions officer also helped me greatly in interview.

Finally I have got admit from ISB, McCombs and Oxford while the result of ESADE is pending.

But I have decided that I would be going only for Oxford. It is a dream come true for a person like me who had only heard of people from famous universities of Oxbridge. Finally this has been a tiring but a rewarding journey and I know it will give wings to my globe tottering future career plan.

Regarding applications, I can only say to be honest in whatever you write. I had mentioned reading alternate history as my hobby. In my McCombs interview, hardly 5 minutes were spent on traditional MBA interview questions.

Rest of the 25 minutes was a discussion on various alternate history writers and what could have happened if there had be no British rule over India (the interviewer himself was an alternate history fan). Also be perfectly clear, reasonable and logical about your future career plan.

My ISB interview was of hardly 3 minutes. The only questions asked were to describe my current role and my future plan. After I had answered these questions, I was told “Welcome to ISB” there itself. The rest of discussion was only around success of Punjabi NRIs all over the world.

I wish best of luck to future applicants and also would like to thank MCB for guiding me perfectly. Keep up your good work!