Business School Deans have a rather unique job description: Management of a business that teaches both management and business.

During a quiz contest for college students in Bangalore the other day, the quiz master threw a short poser: “Who is Nitin Nohria?” Teams pressed their buzzers immediately: the name of the Indian-born Dean of Harvard Business School (HBS) was well-known.

Nohria (pictured above), 56 as of 2018, was born in Nohar, Rajasthan, and spent his childhood in Kolkata, Delhi, and Mumbai. His father, Kewal Nohria, who was Chairman of Crompton Greaves, grafted him into the business world even as he was growing up. Therefore, after completing B.Tech in Chemical Engineering from the Indian Institute of Technology (IIT), Bombay, in 1984, he resolved to learn more about business. What better place to go than to the Sloan School of Management at the Massachusetts Institute of Technology for PhD?

But soon, Nitin realized that he would never be an entrepreneur. He turned to teaching, and in 1988, joined the faculty of the Harvard Business School (HBS). After many years as a professor, he was appointed Dean in 2010.

Nohria, who is a specialist in organization behavior and leadership, believes that businessmen have a social mission. He hopes that his work will inspire Indian immigrants to use their talent and the opportunities in America. As Dean, he has also pledged to improve gender equality. 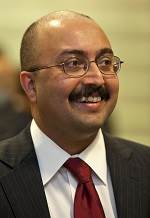 Not just Mumbai, Bangalore has also contributed to America’s intellectual capital: Sunil Kumar, 49 as of 2018, who has been appointed for a second term as Dean of Chicago University’s Booth School of Business, was born in India’s Silicon Valley.

Kumar earned a BE from the National Institute of Technology Karnataka at Surathkal and a Master’s Degree in Computer Science and Automation from the Indian Institute of Science, Bangalore (IISc.). A visiting professor from Illinoi University at the IISc. persuaded him to go to Illinois for his doctorate. Kumar did that and earned a PhD in Electrical Engineering (1992-96). He then joined the Stanford Graduate School of Business as Assistant Professor for Operations and Information Technology.

Interestingly, when Kumar moved on from the role to take on another plum role at the Johns Hopkins University, to become the Provost and Vice President of Academic Affairs, Chicago hired Madhav V. Rajan, another Indian with a similar background. Rajan was also senior associate dean for academic affairs at Stanford before coming to Chicago. Too much of a coincidence, or is Chicago GSB relying on a time-tested approach that’s worked for them earlier?

Says a professor at the Stanford Graduate School of Business: “[Kumar] can complete mathematical proofs, quote Shakespeare and curse in Italian. But he’s like an American, so kind of culturally with it and adaptive.”

How come? Kumar’s father, who was a top official in Karnataka police, instilled in him a love of reading, and top-class scholars at the IISc. impressed upon him through their work that research was his calling. We haven’t been able to research how he acquired his Italian vocabulary. 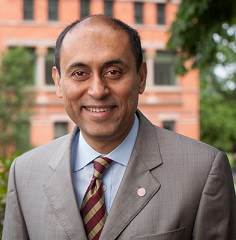 Soumitra Dutta, 54 as of 2018, is another electrical engineering graduate from India who is Dean—of the Samuel Curtis Johnson Graduate School of Management at Cornell University. Dutta did his B.Tech. in Electrical Engineering and Computer Science from IIT, Delhi (class of 1985, second rank), and MS and PhD in Computer Science and MS in Business Administration from the University of California, Berkeley. This might have taken some doing, but Dutta, whose hobbies were body-building and table tennis, managed very well, indeed.

In 1989, Dutta joined INSEAD at Fontainebleu near Paris as Assistant Professor, starting a 23-year stint at the prestigious institution. He also served as visiting professor at Oxford and Cambridge universities in the UK and the Haas Business School at the University of California. An expert in the impact of technology on business, he took over as the Samuel Curtis School Dean in 2012.

Dutta, who was born in Chandigarh to Air Marshall RK Dutta and Tara Dutta, gratefully remembers “two things that I brought with me from India: respecting diversity and the importance of family values.” He is married to Lourdes Casanova, a native of Spain and Senior Lecturer of Management at the Samuel Curtis School.

Roughly around the same time that Dutta might have been settling down at INSEAD, the early 1990s, Jaishankar Ganesh left India for the US. Ganesh had completed his graduation in Physics from Loyola Autonomous College, University of Madras, done BE in Instrumentation Engineering from the Madras Institute of Technology, Tamil Nadu, and worked for HCL for some time.

In the US, “Jai” took his MBA and PhD from the University of Houston. In 1996, he joined the University of Central Florida (UCF) as a lecturer of business subjects. But he soon moved to administration and raised UCF’s revenue ten times in five years. In 2010, Ganesh, now around 50, took over as Dean of the School of Business, Rutgers Camden.

Ganesh, an “academic entrepreneur” in his own words, was inspired by his parents’ education and careers. His father was an Economics student at the University of Virginia in the 1960s before returning to India and settling down to a teaching career. His mother was a teacher and also a scientist. His wife is an IT project manager.

Although considered of Indian origin, G. “Anand” Anandalingam, 64 as of 2018, former Dean of the Imperial College Business School (London), was born in Britain and raised in Sri Lanka. Anandalingam received his PhD and MS from Harvard and BA and MA from Cambridge (UK). This former Dean of the Robert H. Smith School of Management (Maryland) has served as a faculty member at the University of Pennsylvania and at Wharton School. His wife, Deepa Ollapally, is Professor of International Affairs at George Washington University. 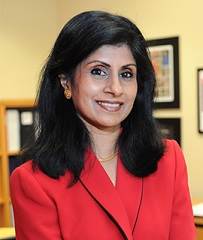 There’s another professor from Mumbai who has made Dean: Latha Ramchand, a gold medalist and a Master’s in Economics from Bombay University. A Professor of Finance at the CT Bauer College of Business at the University of Houston, Ramchand’s focus areas are corporate and international finance and leadership development.

Ramchand, who has evolved programs on “diversity at the workplace,” pointed out at a conference on women’s rights that only 5 percent of CEOs of Fortune 500 companies are women, and less than 20 percent of seats on the companies’ boards have gone to women.

Srilatha Zaheer, now Dean of the University of Minnesota’s Carlson School of Management, was also probably concerned over gender inequality when she found that she was only one of eight women in her class of 120 at the Indian Institute of Management-Ahmedabad (IIMA) in 1975. Before joining IIMA, “Sri” had graduated in Physics at the Women’s Christian College, Chennai.

Looking to launch a career after IIMA, she moved to Nigeria and took up a university teaching post. Later, she and her husband, Aks Zaheer (Professor of Strategy at Carlson and a theatre lover), graduated from MIT Sloan and were offered faculty positions at Carlson. “The intellectual vibrancy and learning culture at the school have kept us hooked. I relish the challenges as a dean,” Sri Zaheer told an Indian journalist, describing herself as an “accidental dean.”

Other Indian Deans at the Top Business Schools

Other big Indian names in b-school campuses abroad are:

What explains the significant number of Indian-origin deans in US universities? Certainly, the large number of doctorates and postgraduates from India staying on as teachers after completing further studies is a factor.  “I think the single largest non-US faculty with links to one country might be Indians,” Prof. Chakravorti of Fletcher’s said.

The appointments of deans of Indian origin indicate that US universities are making an effort to don the “global” garb, according to experts. “Indians globalize easily, and as the world becomes more global, they will probably succeed more easily,” said Prof. Soumitra Dutta.

There is also the matter of curriculum, which now has to take cognizance of emerging economies, including India and China. What better way to achieve this than by casting Indian professors in course-development roles?

Fund-raising is part of a dean’s job in the US, and the economic realities are such that universities have to reach out to students outside the developed world. “In all deanships, there is an expectation now that they be involved externally with the program and not just be an internal leader of the curriculum,” said Jessica S. Kozloff, President of Academic Search. A dean with international experience is an asset here.

Of course, the legendary American spirit of accommodating diversity is another reason for the appointment of professors of Indian origin as deans. Besides, the US continues to offer facilities and an environment for professional growth that are yet to become the norm in India. Moreover, Americans continue to be enchanted with the concept of the “Indian guru.”

However, Ajit Rangnekar, former Dean of the Indian School of Business, Hyderabad, and now Member of the Board of Directors of the Graduate Management Admission Council, an association of top b-schools around the world, removes all mysticism around the question: “All these people were chosen because they deserve to be deans, irrespective of their country of origin.”

The deans’ compensation packages are one indication of their perceived worth to their institutions: for example, Nohria reportedly earns over $662,000 dollars a year, and Sri Zaheer $517,000. America sure knows how to attract the world’s best talent.