It has been 20 years since the idea of the Indian School of Business (ISB) was conceived. This is puny in comparison to say a Harvard that has a 105+ year legacy or even our home grown IIMs (IIMC being the first ever) that have been around for over 50 years now.

It has been a little over 15 years since the institute actually came into being. There is no denying the fact that the school has achieved a superstar status in this short time span.

For years, most in-country rankings kept ignoring the school until it debuted in 2008 in the top 20 for FT rankings. This made the world (read India mostly), stop and take note and the institute went from strength to strength.

Where there is fame, there is also infamy. Over the years, there has been a constant debate, especially with the exodus at the top and the ballooning class size, on whether ISB is really worth the money and time.

Is it a good or bad decision in terms of career advancement and return on investment?

At MBA Crystal Ball, we decided to do a more data-driven analysis to get a grip around this. Numbers, as they say, don’t lie – unless you make them of course.

ISB Statistics on the table

Let’s have a look at the data that ISB puts out transparently in the public domain. Here are two charts we created to aid the readability of the tables on the ISB website: 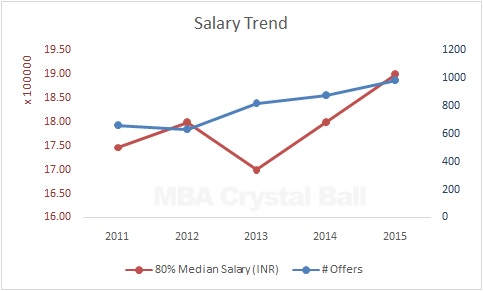 The salary statistics have had a significant jump in the last 7 years. And this is the median salary – a measure I personally consider a much better indicator than the average which can be vitiated with extreme values. Not shown in this chart are the salaries and offers in the recent past. Since 2016 (till 2018), annual average CTC has risen to about Rs 22+ lacs.

Not many schools would give you this; they don’t even provide the 80% range. 2013 of course was the peak of recession so not an earth-shattering big hole in paradise.

The number of offers line shows an even healthier trend with no troughs and a very linear, upward trajectory. ~1000 offers for a class that is in the 800s – surely everything has to be hunky dory in the school? Number of offers too have gone up from about a 1000 in 2015 to well over 1100 by 2018.

Now let’s do a bit of analytics and see what a closer look reveals.

Are there enough companies recruiting at ISB?

Let me put the analysis first so you can make your own assessments and then I will guide you along it. 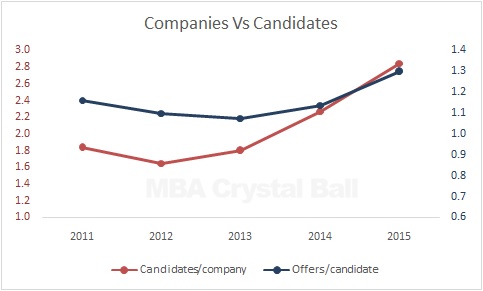 So what do we see here? There are two graphs. The first shows how many candidates are there for each company that comes to campus. A lower number is better because that means better chances of selection for each candidate.

The next line, offers a similar insight for the number of offers for each candidate. Higher the better in this case. This is not as troubling and in fact went up in 2015! Ever since it has steadily maintained about 1.2-1.4 offers per candidate, by 2018.

So even if the number of companies haven’t increased much, they are making far more offers apparently to candidates at ISB. The brand and networking effect does seem to be paying off with companies hiring in bulk – and not just the ones that offer low salaries at that!

Let’s do a bit more number crunching before we pass a verdict here.

Now check out this analysis. 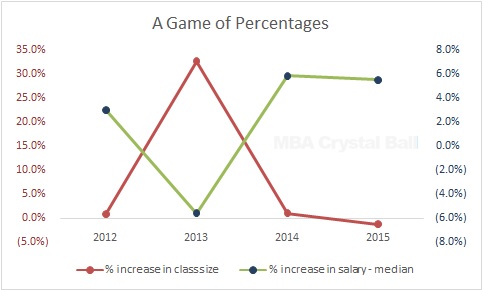 Apologies for the graph not being linear, but I am only using the numbers shared by ISB.

What do we have here? Can’t read the two graphs in isolation really. The % increase in salary number should ideally have no relation with the % increase in class size in an ideal world.

That is to say irrespective of whether ISB is a class of 100 or 800, they should be able to get decent salary hike. But we see that the two do have an inverse relation here. Troubling signs?

So where does this leave our big question? Hang on just a bit more and we’ll get there.

If only everything could be captured neatly in an Excel or a Chart! Thank God we’ve not come to that yet.

Beyond just the placement numbers and salary at ISB, having experienced the program first hand, I can say with some authority that the program is (cliché alert) truly transformative.

Entering the hallowed ground is akin to using a portkey for transporting into a Tomorrowland – literally and figuratively. Literally because the campus is just beautiful and out of this world. Figuratively, because the kind of person the program makes you is one who is ready for the new tomorrow.

Hyperbole aside, the program’s true value stems from its collaboration with the famed international schools. This ensures they get excellent exchange faculty which even to date, trumps the local, home-grown ones.

This is a dimension ISB is working on aggressively but still to come to grips with. Add to that the modeling on international school ensures that the student clubs are completely autonomous and are hotbeds of activity as well as networking.

Our verdict on ISB: Worth it or not?

If we look purely at the numbers, ISB has done a good job on the face of it, though it does seem to have trouble with the growing class size.

But then, if you were to do a similar analysis on the top schools, maybe the results will be the same. The point being, it is still a growing school, far from its maturity.

In any famed school, be it the IITs, IIMs or the Harvards of the world, there will always be the bottom 4-5% who struggle.

If you have the conviction that you won’t belong there, ISB is a pretty decent bet for the career in general.

45 thoughts on “Is ISB still worth the money and time? A statistical analysis”