Here’s a quick refresher on the well-rounded member of the geometric family – the circle. In this tutorial, we’ll cover the basic concepts, properties, formulas and theorems needed to solve MBA and MS entrance exams.

Definition: A circle is a simple closed figure in which all the points that lie on it are equidistant from a point called center.

Here’s a circle with center O. 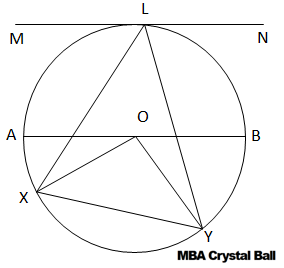 Here are some basics regarding circle and its properties:

Radius: The line segment that connects the center of the circle to any point on the circle is called radius. OB, OA, OX, OY are the different radii of the circle in the figure above. Infinite number of radii can be drawn for any circle.

Diameter: The line segment that passes through the center and connects two points on the circle is called the diameter. AB is the diameter of the circle. Like radius, infinite number of diameters can be drawn in a circle.

Chord: The line segment that connects any two points on a circle is a chord. Infinite number of chords can be drawn in a circle. XY is a chord of the circle.

Apparently, the diameter is the longest chord of a circle.

The measure of the distance around the edge of a circle is the circumference of the circle.

The circumference of a circle is given by the formula,

Where C is the circumference and r is the radius.

Since 2*radius = diameter, Circumference is also given by

The area of a circle is given by the formula,

Where r is the radius of the circle.

Since r=d/2, Area is also given by

An arc is a part of the circumference of the circle. XY is an arc in the figure above.

A sector is the area covered by two radii and the arc connecting them. XLY and XOY are two of the sectors in the figure above.

Where x is the angle subtended by the arc and r is the radius.

Inscribed angles subtended by the same arc are equal.

A central angle is twice the corresponding inscribed angle.

In the figure above,

Tangent: A tangent of a circle is a line that just touches the circle at one point without intersecting it. MN is the tangent in the figure above.

Semicircle: A semi-circle is half the circle.

Problem 1: Area of the circle above is 81p. ∠DAB = 55°. Find the central angle subtended by arc DB and the area and circumference of the sector DOB. 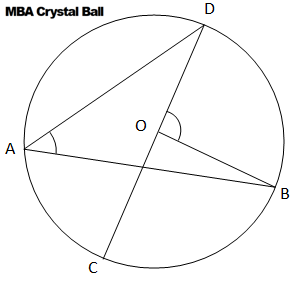 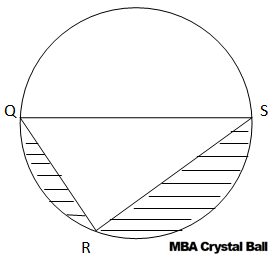 Finding the area of the triangle:

According to the Thales’ theorem, if diameter is the side of a triangle, then it becomes the hypotenuse and the triangle is right.

Learn about many more maths concepts.