Set theory has its own notations and symbols that can seem unusual for many. In this tutorial, we look at some solved examples to understand how set theory works and the kind of problems it can be used to solve.

A set is a collection of objects.

It is usually represented in flower braces.

Each object is called an element of the set.

The set that contains all the elements of a given collection is called the universal set and is represented by the symbol ‘µ’, pronounced as ‘mu’.

For two sets A and B,

The easiest way to solve problems on sets is by drawing Venn diagrams, as shown below. 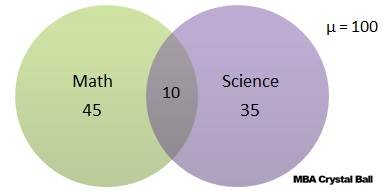 As it is said, one picture is worth a thousand words. One Venn diagram can help solve the problem faster and save time. This is especially true when more than two categories are involved in the problem.

The Venn diagram for this problem looks like this. 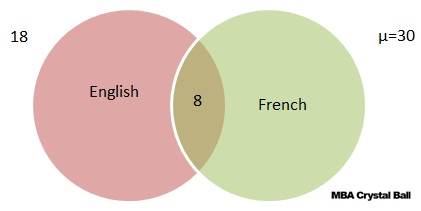 Every student is learning at least one language. Hence there is no one who fall in the category ‘neither’.

Note: The question was only about the total number of students learning French and not about those learning ONLY French, which would have been a different answer, 12. 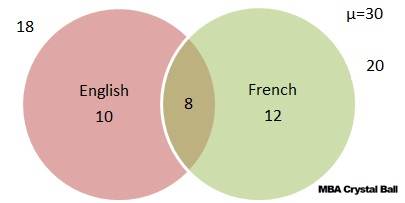 No. of students who played at least one game

Alternatively, we can solve it faster with the help of a Venn diagram.

The Venn diagram for the given information looks like this.

Subtracting the values in the intersections from the individual values gives us the number of students who played only one game.

In a group, there were 115 people whose proofs of identity were being verified. Some had passport, some had voter id and some had both. If 65 had passport and 30 had both, how many had voter id only and not passport?

Let us draw the Venn diagram for the given information. 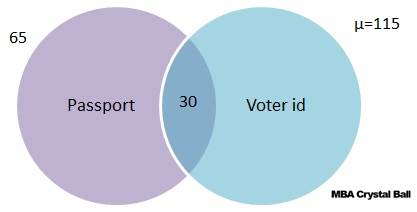