The Indian economy is at a fascinating stage, for MBA students looking at its academic side and business professionals looking at its practical implications. In this post, you’ll get a whirlwind tour of the history of the Indian economy, important statistics, the overall structure, its sectors, how it compares with China and USA, and much more.
At the ripe old age of 18, Akalank becomes the youngest guest blogger on our site. He caught our attention with a response on Quora to a question about why Indians have a soft corner for Russia rather than American. Without bothering to verify if he is a Russian spy on a secret mission to garner desi support, we invited him to write about the Indian economy.

History, present and future of the Indian economy in a nutshell 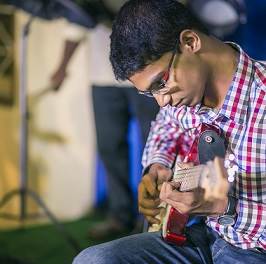 A topic as vast as the Indian economy deserves a whole book, if not a series. We are trying to compress it all into one simple blog post.

There may be several important sub-topics that we won’t be able to cover in the limited space. But I hope what we have in here gives you a good introduction to how the Indian economy has evolved over the years.

We’ll start off with a brief history of the economy (you’d be surprised to see how its fortunes have dwindled over the centuries). We’ll see how it is structured across the primary, secondary and tertiary sectors and also compare it with how the other big economies (China and USA) are structured. Finally, we’ll try to take a look at its future direction.

Plenty to talk about, so let’s get started.

History of the Indian Economy

Belying popular belief, the Indian economy was historically, one of the major economies in the world. 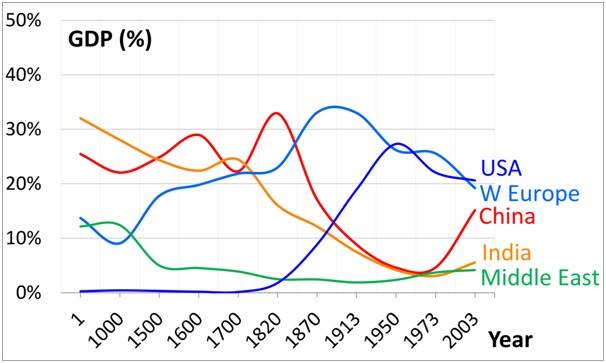 According to British Economist Argus Maddisson, the size of Indian economy declined from 27% of global economy in 1700 to just 3% in 1950. As a comparison, Europe’s share of World Economy in 1700 was 23%. Prior to the British arrival, India remained a major exporter of processed goods.

However, once the British had arrived, they imported raw materials from India, processed it and exported it to receive income. As a result, the India exported goods of less value and imported manufactured goods, which made the nation’s economy spiral downwards.

Important Statistics of the Indian Economy

The Indian Economy is the 10th largest economy by GDP, which means that India is the tenth largest producer of goods and services in the world.

Third only to the USA and China, It is also the 3rd largest economy by PPP which means that a single currency unit of India, the rupee, can purchase more goods than the currency units of countries such as Japan, Germany, France etc.

Considering the fact that other than China, no other major economy is ahead of India, this is a strong growth rate. As the BBC puts it, “GDP is expected to grow by more than 8% in the coming year, a figure European economies can only dream of.”

The growth rate is expected to surpass China by next year.

Sectors of the Indian Economy

The tertiary sector, which includes transportation of good and other services such as health, insurance etc contributed a huge 3,263,196 [~59%].

A pictorial representation of contribution to GDP, till the fiscal year 2011 – 2012. 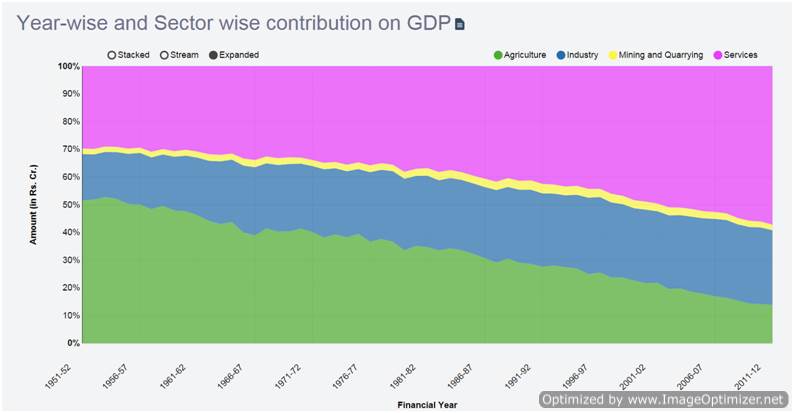 This indicates that while the tertiary sector and the secondary sector have grown by leaps and bounds since 1951, the primary sector has seen a steady decline.

The primary sector takes up over half the total workforce. Interestingly, this is followed by the tertiary sector that takes up a little over a quarter of the remaining, followed finally by the secondary sector.

Although India ranks second in worldwide farm output, it lags behind in crop yield per unit area of farms. An international study showed that India’s farm yield lags behind the highest yield by 50%.

States of India lying on the Indo-Gangetic plain [ such as Haryana, Punjab, Uttar Pradesh ], amongst others are some of the important Agricultural regions of India.

India exports agricultural products such as rice, wheat, spices, cereals to countries in the Middle East, South East and East Asian countries. 10% of India’s trade income comes from the export of these products.

Although India is a huge producer of minerals and chemicals, domestic demand is so high that India still has to import a lot.

As already stated, the tertiary sector produces the largest share of the nation’s GDP. It includes the IT Sector, Transportation, Tourism, Banking, Finance, Energy amongst other fields.

The nation’s IT sector has seen rapid expansion, with 7 Indian firms being listed in the world’s top 15 technology outsourcing companies. The expansion is attributed to skilled workers who in turn demand low-wages.

Tourism employs 7.7% of the workforce, producing 6.6% of the country’s GDP.

It is the third largest in the world. The three largest destination states of India: Maharashtra, Tamil Nadu and Delhi produce 24.7%, 17.3% and 11.1% of India’s foreign tourist visits, receiving more than half of the country’s tourist visits.

Chennai, Mumbai, Delhi, Agra and Kolkata are ranked 38th, 50th,52nd, 60th and 99thin the number of foreign tourist visits in the world respectively.

The American economy relies heavily on Industry, with the Agricultural sector contributing less than 2% of the nation’s economy.

Despite this, the USA remains a net exporter of food, owing to the less population, and due to intensive agriculture by use of modern techniques and tools.

The crop yield in the USA and China are both high, differing from that of India. 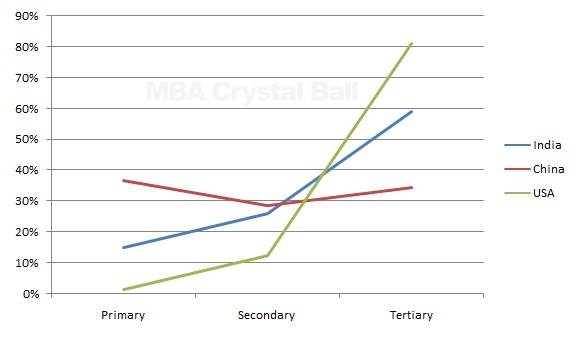 While the Indian and American economies depend heavily on the tertiary sector, the Chinese economy is well-rounded, with the Primary, Secondary and Tertiary sector contributing 36.7%, 28.7% and 34.6% respectively.

The United States economy is tilted heavily towards the services sector, which contributes a whopping 80.9% of the nation’s economy.

The Future of Indian Economy and The importance of Agriculture

Modernization will also lead to increased income for families in rural areas, thus increasing their Purchasing Power, which in turn expands the existing market for manufactured goods, and expansion of the economy.

The recent Make in India project launched by the government demands a huge number of skilled labour in India. According to India Skills Report, just 34% were found employable out of about 1, 00,000 candidates.

The unemployment problem in India arises not out of lack of job opportunities, but due to the lack of skill of labourers. Training them will lead to faster Industrialization and will increase the number of goods produced by the manufacturing sector.

About Akalank Prakash: Still in his teens, Akalank recently completed his 12th Standard exams. When he’s not reading history or learning about economics, you’ll find him playing his guitar or scouring the internet for news on aliens.

2 thoughts on “Indian Economy in a nutshell – History, Present and Future”