GMAC, the company that manages the GMAT exam in India and across the world, offers additional insights on the test performance to candidates who are willing to pay for it. According to GMAC, this GMAT Enhanced Score Report (GMAT ESR in short) helps test takers who aren’t satisfied with their scores get additional information on each section. That in turn can help them review their GMAT study plans for the next attempt.

Here’s what you need to know about it.

The enhanced score reporting feature was already available since September 2014 for students who had purchased the GMATPrep® Exam Pack 1, a set of GMAT practice tests sold by the same company as a separate product for $49.99. Now it can be extended to candidates who take the real exam as well for a cost of $30.

The original GMAT score report is pretty lightweight in content. If you scored very low in the GMAT verbal section, or the new Integrated Reasoning (IR) section, or even quant (the traditional stronghold of Indian engineers), the basic report doesn’t help much. Maybe it’s by design, for all we know.

GMAC probably sensed an untapped opportunity to satiate that curiosity. There could be many candidates who’d be willing to open up the opaque black box and get a peek into what went wrong…at a price.

The cost of the GMAT Enhanced Score Report is $30 and can be purchased before or after your GMAT exam. This is in addition to the $250 that you have already paid for taking the test. However, this cannot be applied to the GMAT Online exam.

What information do you get for that fee?

The enhanced score report will give you the following new data:

Apart from what you get, it’s also important to know what you don’t get from the report.

The level of granularity may not match what you have in mind. The ‘rankings’ indicate percentiles, not absolute numbers. That may be of limited value.

For instance, if you are hoping to see how many specific Sentence Correction questions your answered right out of the total, you won’t get that data.

For folks who have already tracked the time taken across various paid or free practice GMAT tests, the average time taken per question would be already known. 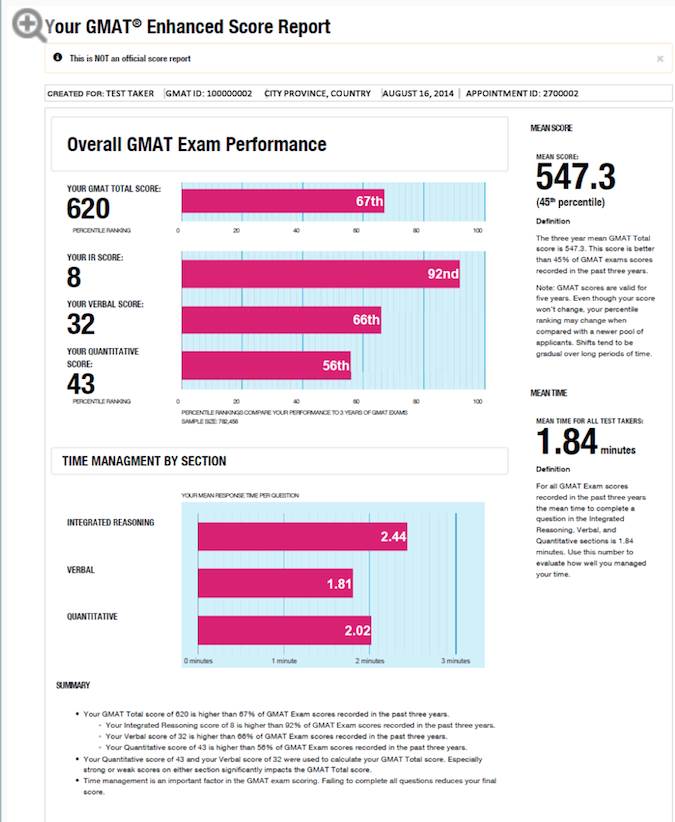 How does it impact the overall cost of taking the GMAT?

If you have an imaginative mind, you might’ve started wondering whether it’s all inter-linked in some way. Think about the various ways that the rupee is leaving your pocket.

GMAT test fee: The $250 you pay for the GMAT test is the only mandatory fee in the process. However, for all practical reasons, it isn’t the only expense. Your GMAT related expenses started much earlier and will continue in the future as well. Depending on how you chose to study for the GMAT, your expenses (including GMAT course study material, online or classroom coaching) would’ve already run into several hundred dollars (thousands of rupees).

GMAT prep costs: The actual test sets you back by another 15,000 rupees ($250). If you’ve taken the test multiple times, this number escalates rapidly. I recently spoke to a candidate who took the test 6 times and then gave up on her MBA plans altogether for not being able to go beyond the minimum GMAT score she had planned for. That’s 90,000 hard earned bucks down the drain.

GMAT score forwarding costs: You get to choose 5 Business schools where you can send your score for free. But in all likelihood you’ll apply to other schools that you hadn’t planned for, because you are applying to a total of 7-8 schools or your score might be off the mark. For every additional school, you’d be paying $28. Set aside between 5,000 to 10,000 rupees for that.

Enhanced Score Report cost: Now with this option available to test takers, the fee can go up by $30.

The enhanced score report is another revenue stream that adds to GMAC’s healthy bottom-line (their gross profit is an impressive 47.9%). The fee of $30 might seem small in comparison to your overall GMAT expenses, but if you consider the volumes it’s isn’t small at all. Even if 1 in 5 test takers would buy it, that’s a cool $1.4 million for the company.

Whether it’s the candidates’ keen desire to analyse their performance or just plain insecurity that drives them to take up the option, a million dollars more in the bank might seem like a good business decision.

But GMAC needs to keep challengers (like GRE) for their GMAT product at bay. [Read this related post – GRE vs GMAT].

GMAT test takers from the USA, UK and other countries may think the fee is miniscule, but for Indians it can all pile up to a significant amount. And India is a BIG cost-conscious market for GMAC.

It wouldn’t hurt GMAC to include the new information in their regular reports for free. There’s hardly any incremental cost for them to do so, as they are already capturing the data. But for now, that isn’t on the to-do list. So, be prepared to part with a little more money if you want a little more clarity in the not-so-little exam.

What do you think about this new feature? Are you willing to pay $30 to get more insights into your test performance? Do you think the nature of additional diagnostic data justifies the price tag?

The GMAC’s online team might be scouting the internet for responses and reactions to their new business move. Your views and suggestions in the comments below will help.

4 thoughts on “GMAT Enhanced Score Report: Is it worth the extra money?”