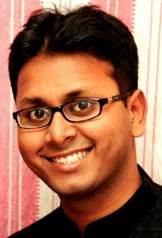 The Tepper school of Business attracts many Indian applicants. ‘Don’t they all?’ you might say. Sure they do, but the Tepper MBA is special, because of Carnegie Mellon University. CMU has been an all time favourite with desi techies who’ve been attending CMU for ages in pursuit of a top MS degree and of course for undergrad courses as well. The Tepper School of Business builds upon that legacy.

When folks who’ve not been successful in their earlier attempts approach MBA Crystal Ball for help, just like the candidates, we feel the extra pressure too. We hope applicants see significant value in working with us. And when the admissions journey ends on a good note, it gives us tremendous satisfaction. Ritwik shares one such story and walks us through his emotions as he went through each phase.

Tepper MBA: How I Got My Candy! – by Ritwik Verma

December 2009: “With a sub-par score of 680, where should I apply? Anyway, as I don’t want to take the GMAT again, let me apply to the schools where I have sent my score. Ross, Duke, Kellogg etc. I want to go into FMCG marketing from IT services and I need the best school for that.

I will write the essays myself; I am so creative after all. I don’t have the experience in my desired industry but what the heck, I can convince them with my reasons.

I worry that my manager and team leader won’t write me a strong recommendation. Why not ask them to forward the recommendation link and I will submit it on their behalf. Yeah, I think I will be able to get something if I just try.”

This was my thought process for my first MBA application. What I did then could easily classify as points under the ‘Don’t List’ for an MBA application strategy.

It hurt when I received rejections from all the schools but I had to take the failure in my stride and move on with life.

June 2012: “I have to get an MBA! This job won’t take me anywhere. I think I have what it takes to get through. I just need some help. This time I am going to leave no stone unturned to come up with a fool proof strategy. Let me focus on the first hurdle – the GMAT.”

By June 2012, I was fanatically sure that I wanted an MBA. I was determined to get into a good business school and was ready to give my 150% to achieve this goal. My first focus was the GMAT.

July 2012: “Hmm… Which are the good GMAT coaching institutes in Bangalore? I had screwed up my Verbal last time. I need to crack verbal this time. Crack Verbal! Hmmmm….”

I took GMAT coaching for 2 months at CrackVerbal – Bangalore (related page: CrackVerbal GMAT Online Course Reviews). Prepared a detailed study plan and most importantly, stuck to it. Meanwhile, took a GMAT appointment for 4 October which, if you ask me, was a bit late. Ideally, I should have started early and written the GMAT before September.

All say the same thing – Awesome faculty; Close-knit community; Strong focus on your career; Great experiential learning; Leadership – only ABC is the way to learn it!!! CONFUSED!!!!!!!!!!!!!!!!!!!”

If I say that I was confused about the school selection, it would be an understatement. With so many good schools and hardly any idea about what sets them apart, I was bewildered. I needed some guidance on school selection strategy. Moreover, with an expected GMAT score of 710-720 I needed a profile evaluation too.

September 2012: “Gosh! It’s a jungle out there. I need to have a map to take the right path for my MBA application journey. MAP… Hmmmm…”

I came to hear about the Mock Application Process (MAP) offered by MBA Crystal Ball and immediately knew that it was something that I desperately needed. The MBA MAP not only helped me assess myself from an admission committee’s perspective but also taught me a lot about my post-MBA goals.

To be honest, I had very little idea about what I wanted to do after an MBA. Discussing post-MBA plans with Sameer, I realized the right way to look at the career options after an MBA.

I also realized why I came a cropper with my previous application attempt!

The MBA MAP explained one thing very clearly to me – MBA application is a game and you have to play with the rules. There is a big scope for personal touch but within the boundaries. Whims and fantasies about an MBA or post-MBA goals won’t lead you anywhere.

With the goals clear in my mind, I selected the B-Schools – 2 Ambitious, 2 Stretch, and 1 Practical. And then arrived October with GMAT…

Yes, I did it! I got a score of 750 in the GMAT which was the highest that I had got in any of my tests, so I was ecstatic. That took a big load off my chest. But after the MAP, I had realized that GMAT is just a component, and the next and the biggest hurdle were the essays.

I resorted to MBA Crystal Ball’s expertise again. I took the MBA essay editing service and started working with MG.

In the brainstorming session, while discussing about my past achievements and post-MBA aspirations I could see a strong story emerging. I realized how and where I should use my professional achievements and extra-curricular interests to support my story.

During the MBA essay writing process, I received unwavering support from MG who not only corrected my mistakes but also improved the quality of the content with better language and expressions. The best part about the whole process was that I was able to keep my personal flavor along with a very impressive language.

I applied to Kellogg and Tepper in October in the first round. Kellogg and Tepper both had been my ambitious schools and I had never thought of actually getting in them. I knew that there were more practical and realistic schools for me in line for which I would prepare and apply in the second round.

November 2012: “I cannot believe my eyes!!! Is it really addressed to me? Am I really invited for an interview with Tepper admission committee? Wow!!!”

I couldn’t believe my eyes while reading the interview invitation from Tepper. It was a dream to read such a mail ever since I was in the final year of my college. As I had already got an interview waiver from Kellogg which is the default option for many international applicants, Tepper’s interview invitation was the first indication that someone somewhere in the great US of A had liked my application. I knew that my application strategy had worked so far.

Without leaving any room for error, I sat down to prepare for the interview process – scanned my application a thousand times, YouTube videos on Carnegie Mellon (including 1 hour video of their International Festival), sample interview questions, numerous mails to some of the current students with whom I had been in touch with.

Finally the day arrived and I attended the interview in my calm and cool self. The interviewer was quite friendly. Most importantly, I was ‘me’ throughout the interview but followed a tight script while answering the questions.
6:00 am 20 December 2012: “Please…God…Please…”

Kellogg’s denial two days ago had left me shattered. More so because I had finally received an interview invitation and had a telephonic interview which was a positive sign. And here I was sitting on my computer at 6 in the morning (midnight according to My Standard Time). The result for Tepper was due on 19th evening US time.

With drowsy eyes, sleepy fingers I logged into my email. There was a mail from Tepper. There was something written about exciting news with a link in the mail. I didn’t pay much attention to the subject line and immediately clicked on the link. A flash video popped up with the magic words… “Congratulations! You are in!!!!!”

There are very few instances in life when a massively joyous moment explodes in a span of milliseconds. It was one such moment. I was ecstatic, on top of the world, in fact on top of the chair too. It was time for celebrations!

Here’s the icing on the cake. I also got an admit from UNC Kenan Flagler!

And there’s more. Last week, I also got an admission offer from Simon. I applied to Simon in Round 3 after one of the ad-com members contacted me saying I stand a great chance for scholarship. I got an application fee waiver, TOEFL waiver and even GMAT waiver! (In the sense that they didn’t need official scores to be sent through GMAC, and were happy with the official score report). So, it was a free application for me! As it turned out, I got an admission with 50% Scholarship (equivalent to $ 48k). 🙂

And the ISB admit came in today!

Even in the wake of this additional good news, Tepper still stands tall 🙂

This time, I am sure that my MBA application story will be more of a Karan Johar movie than a Guru Dutt movie and there are many who I want to thank for that.

First of all – my wife who supported me not just emotionally but even with school search, GMAT and interview preparation, Arun Jagannathan for his magical touch to my GMAT preparation, Sameer for teaching me everything about the international MBA game, its rules, and how to win it, and last but not the least – MG for adding his ‘Midas touch’ to my MBA essays and turning them into gold! Thanks a lot!!!

What this MBA blog post doesn’t reveal is that Ritwik is multi-talented. He is the brain behind the concept, script and music in the video trailer of the best-selling novel – Business Doctors.

He would be happy to take your questions about the Tepper MBA rankings, class profile, tuition, scholarships, GMAT or anything other related topic. Join in here –> Tepper School of Business MBA forum.

7 thoughts on “Tepper School of Business Carnegie Mellon MBA on your list?”