There would be around 14 critical reasoning questions in the GMAT verbal section. You would be provided with a passage in the form of an argument with five choices for the answer. In this GMAT preparation post, we focus on CR questions.

These questions would vary in terms of the subject they would be based upon and the candidate need not have any prior knowledge of the topic concerned. This section would not be a test of the candidate’s knowledge; rather it would be an assessment of the candidate’s capacity to make a judgement and select the answer that sounds most appropriate.

A lot of practice would be needed with the various styles of questions asked so as to be familiar with the methodology involved in arriving at the answer. For this, a stage-by-stage dissection of the question needs to be done, the relation between the various assumptions or elements needs to be checked, a pattern needs to be created in the mind as to what action or circumstance leads to another and what is the end result. There may be unnecessary details in the given passage which may cause confusion. The relevant information needs to be sorted out so that there is clarity about the key points that influence the given argument. This would in turn help pinpoint the right or the closest possible answer.

It would be advisable to watch out for simple and almost correct sounding answers which would in fact be trick answers. While reading through the various answer options, keep an eye out for the option that may seem to contain redundant information but may in fact be the right answer. 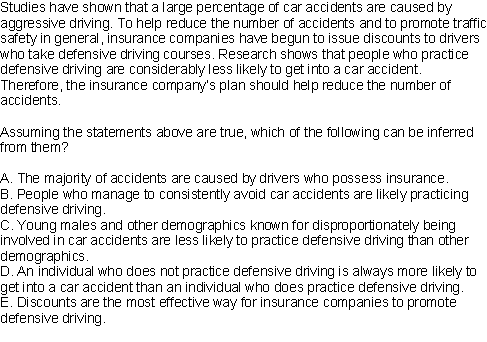 Here the influencing factor would be ‘practising defensive driving’ and the result would be ‘reduction in the number of accidents’. This has to be borne in mind while reading the answer choices. Options A and E would be ruled out, now the choice would be between options B, C and D. If you read the passage carefully, you would realise the following:

‘Research shows that people who practice defensive driving are considerably less likely to get into a car accident.’ This would be the key statement with the rest of the content just used to build up the storyline.

From this statement it would also be inferred that those who are likely to get into a car accident are people who do not practice defense driving i.e. the formula of reversing and negation would be applied here. So we would infer that C is the correct answer.

This would be one way of arriving at the solution. Each question would have a different approach, so it would be worthwhile to know the various formats of questions asked and the techniques employed to solve the same. This would also help save time and get your best score for the GMAT verbal section.