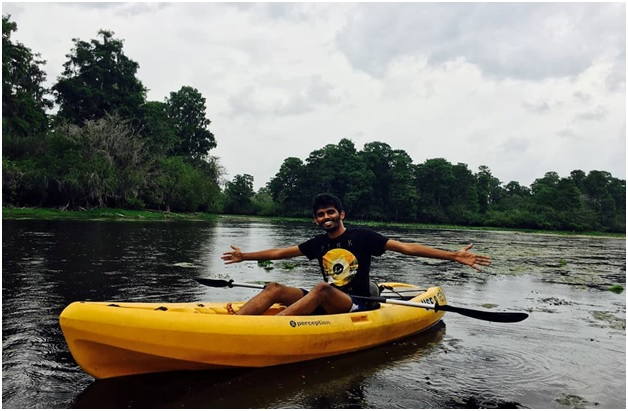 Shrivardhan Rao highlights the differences based on his experiences as a student in India and USA.

Studying in India vs Studying Abroad

Hello! My name is Shrivardhan Rao. In this article, I try to justify my life choices such as opting for Masters in the US and debate on the Indian perception of creativity, which I strongly believe is most affected by the education system.

I’ve grown up in Hyderabad, Telangana for most part of my life but I was born in Salem, Tamil Nadu which is my hometown. Now adding to it, my mother tongue is Kannada and I am also fluent in Hindi, English, Tamil and Telugu. After an amazing schooling experience, the two years during Intermediate was a nightmare in more ways than I can explain.

No IIT, some 10k+ rank in AIEEE and a miserable EAMCET rank, I was only able to secure a seat in a good local engineering college under the management quota. But I did have a choice to make: my field of study for my engineering degree, and I chose Computer Engineering as it would allow me to take courses in both Electronics and Computer Science.

My interest in electronics and computers were mostly due to the atmosphere at home. During my engineering, I could crack a couple of interviews at companies like Infosys, Cognizant and Wipro. I did not consider Masters at that point of time, as I did not want to tax my dad and decided that I would just take up a job.

The proposition of a job and travel to a new place got me excited. I chose to join Cognizant in the October of 2013. Cognizant was a great company to start my career at and I learnt a lot during my 2-year tenure. Then I “jumped” to Genpact for a better paying job.

I did not have the foresight or guidance that could warn me from the dangers of settling for a job while having the potential and opportunity to keep learning.

I’m not against the IT jobs in India, but all I’m saying is, it is very important for everyone to understand the bigger picture or scope of whatever they are working on. Most of the IT jobs in India are customer oriented and are not about creating a product.

As engineers, we must look to try solving real problems and create solutions like other great engineers do. The jobs I took up did not help me to learn anything about Computer Science or about solving realistic problems. My roles can best be described as a technician rather than a developer, where I worked in a pre-defined manner to solve issues.

My performance was measured based on quantity of issues solved and not on the ideas that I used to solve the problem.

All this chaos, rendered me lost.

In November of 2015, I decided to get back on track and started applying to Universities in the US. I had given my GRE along with the others during my Engineering and I just had to take my TOEFL. I had applied to universities that had plenty internship opportunities.

I chose to do my Masters in Management Information Systems as most of my experience was in handling data and creating systems that analyzed data. I preferred it over Computer Science for purely financial reasons and because it included a fair amount of development which would give me an edge over the others. Also, the chances of me getting a GA was higher for MIS.

I had applied to three universities Oklahoma State University, University of Texas Dallas, University of South Florida (USF) by Jan 2016, of which I was offered an admit in two after about three months. I had chosen UTD initially as I had more friends in and around Texas but that is when I got a mail about a GA position at USF.

The position required a .NET developer (exactly my previous experience) familiar with creating websites based on the MVC framework. I passed the interview without any glitches and on decided to fly to the US on July 26, 2016.

At this point in my life, I started believing that no matter what, nobody should ever stop doing what they are good at. Nothing can really stop you.

The GA at USF meant that I would get full scholarship for a year that included insurance. It also paid handsomely and was more than enough to cover my living expenses in the sunshine state of Florida.

How studying in USA is different

At USF, I felt I was back in school where I learn a lot. The graduate advisors and professors welcomed the students with great enthusiasm although they have been doing the same thing twice a year for the past 20+ years. They exhibit the kind of professionalism that is true to their doctorate degree. The advisors are very patient and considerate.

I had a good mix of classmates: Indian, American, Chinese, African and so on, but that did not matter because everyone does not judge here. All that mattered was what you had to offer in terms of offering a new perspective to the problem at hand. We often had “real” assignments that would require us to work as a group.

The heterogeneity of the group: M F LGBTQ never mattered. Each person discusses their point of view, states their interest and assumes a role. The end results are amazing, everyone contributes and everyone learns while also creating a professional output, which is of least importance to the professor as s/he is more interested in the way we approached the problem. This is one reason why getting a 4 GPA gets tricky and why people here don’t compare scores to the last decimal point.

Talking about my course, with proper guidance from the graduate advisor I picked the right courses at the right time. I’ve had wonderful professors for Data Analytics (Dr. Balaji Padmanabhan), Big Data (Dr. Kaushik Dutta) and Statistical Data Mining (Dr. Daniel Conway) that form the core of my Master’s degree. The professors are approachable, unbiased and professional to the core. They are extremely helpful and prompt in responding to queries. At the same time, they do not budge when it comes to indiscipline.

Students are free to take any course offered by the university after conforming to the due process. There are no restrictions based on the major. This is an absolute necessity for students because nobody can ever predict when you are going to have that epiphany that changes your life.

This sort of professional freedom is what Indian education system lacks. I am stressing on the atmosphere here to highlight what I believe is missing in the Indian ecosystem. I am not saying the IITs and IIMs are devoid of this kind of an atmosphere. I’m trying to present a lucid picture of the education system in the US, so that the readers can come up with comparisons of what percentage of Indian institutions can emulate this kind of an atmosphere.

Education is very expensive in the US, but from what I’ve seen the money is put to good use to cater to provide for the best atmosphere for learning. Food, transport, housing, sponsorships, insurance, facilities and rewards nothing is ignored. Most universities including USF strive to stay open to all schools of thought and do no advocate any idea. This allows students to focus and put in tremendous amounts of effort to achieve something in life.

Furthermore, this kind of atmosphere is exactly opposite to the real world outside, that is why studying in a such a setting is important to allow students to aim big and way out of their league. Nobody would ever dismiss an idea as crazy in a university, professors provide their candid views and valuable insights, the students work on proving their hypotheses. If it works, it’s a great new idea overnight, else it forms the base for further research. This is how innovation happens.

Moving on, my coursework at USF (Big Data) laid a solid foundation about several Big Data technologies and helped me bag an internship at SAP labs. I analyzed that I was mid-way between a Data Analyst and Developer. I could develop tools that would analyze data and comment on the algorithm that is used to analyze the data. That’s when I felt I needed to work more on these skill sets and started to apply for internships.

Internships are greatly encouraged in the US and the university also provides credits towards an internship. That is when one of engineering friends referred me to a Big Data Developer intern position at SAP Labs, Palo Alto, where he works as a Senior Developer. I’ve been at SAP for six months now and just got my internship extended until August 2018.

The intern experience at SAP in the Bay area is exhilarating to say the least. I have been able to learn at a very fast pace, thanks to the technology stack and very experienced mentors at SAP. The pay is competitive, just enough to manage living and tuition.

Come this August I would graduate from USF and start job hunting which is a testing phase for every student, because nobody ever says why exactly your resume is not picked. Preparing the right type of resume for a specific job description is also a tedious task. USF helps in many ways by conducting several workshops that teach resume building. As I have not landed a full-time yet, I cannot comment on how it works or how easy it is.

However, I would like to talk about how hiring works in general. Companies have a team that scout for specific talent, these teams typically first distribute an internal mailer that announces the role and explains about the position. If there is nobody interested in the role internally, the scope is expanded to referrals and interns. Converting an intern to a full-time is technically and economically feasible. In case there is no internal talent available, the team goes about finding people through networking, social media etc.

So, to get a job students must start with trying for referrals, internships, and building contacts in that order. Regarding convincing recruiters about work permit, there is not much anyone can do about it. Make sure you apply to jobs that are ready to sponsor and be on top your game to get the sponsorship at the earliest.

Overall, I would say that studying in the US has allowed me to always focus on the big picture and taught me to be aware of the opportunities around me. In other words, it’s not Indians who lack creativity but it’s the system that plays a crucial role in either nurturing or destroying it.

Studying here empowers you to be independent and teaches you to stop at nothing. It also provides you the means and ways to achieve your dreams. My only advice to anybody is to keep calm, stay healthy and always thrive to make a difference on this pale blue dot of ours.

Finally, I would like to thank all my friends who have been there for me no matter what. They’re the best. I would like to mention a few names here, who helped me with this article: Praveen, Sidhartha Madhavaram, Shibali Malla, D C Praneeth, Sinduri Vuppala, Vinay Kumar, Sri Krishna.

10 thoughts on “Studying in India vs Studying Abroad: Differences, Challenges and Opportunities”