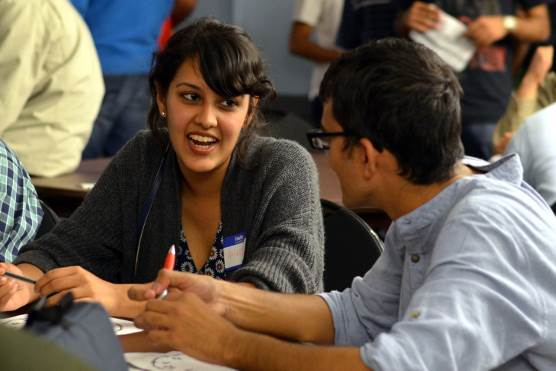 Indians love to boast about the cultural diversity of their land, but it is not until they arrive at a US university that they encounter the real thing. All said and done, some things are the same wherever you go in India, and there are not that many surprises.

But new Indian students who arrive in the US are never quite prepared for the cultural tidal wave that await them on campus.

However, most of them overcome the culture shock eventually and come to love their campus lives, so much so that they suffer a “reverse culture shock” when they visit home.

The initial months of adjustment are the most difficult for Indian students. Here we discuss some problem areas and how students find solutions.

The main difficulty that Indian students face on campus is how to interact with other international and American students and teachers.

A large majority of Indian students, even some of those who have graduated in the English medium from reputed schools in big cities in India, not to speak of small towns, struggle to converse with other students, particularly Americans.

Moreover, Americans find it difficult to understand their accent, and the need to repeat themselves frustrates them. However, like other international students, most of them are, before long, able to speak in a neutral accent.

Another problem is the use of Indianisms. “Made in India” phrases such as “what’s your good name?” “revert back,” “attended a function,” and “mother promise,” and words such as “prepone,” “cousin brother/sister,” and “out of station” puzzle all except others from India.

The use of “is” and “are” and “has” and “have,” and even “had,” interchangeably causes bewilderment among native speakers.

In some situations, Indian students grasp the literal meanings of words but don’t comprehend what the speaker is trying to convey.

For example, to a casual “How do you do?” from an American, the newcomer Indian student, without realizing that the question was meant only as a courtesy or greeting, may feel obliged to provide an update of how his/her day has been, only to see the American walking away briskly.

Such situations may confuse Indian students and take away some of their self-confidence. The inability to talk to and mingle with other students may negatively influence their social lives, and they may end up forming a circle of friends consisting of only Indian students. This robs them of an opportunity to experience diversity on the campus, which brings down the quality of their overall academic experience.

The difficulties associated with communicating with others also affect Indian students’ academic interactions.  Many Indian students are afraid to raise questions related to their subjects or answer teachers’ questions. They worry that their teachers might not understand them or that their inability to speak clearly might invite ridicule from their classmates.

Subtle differences in body language between Americans and Indians, too, are often cause for awkwardness. For example, while meeting someone for the first time, Indian students may offer a “cold fish” handshake or a “crusher,” while a firm handshake is what Americans expect.

Another aspect that Indian students fail to notice early enough is that Americans respect “personal space,” which is roughly an arm’s length from the next person, even a good friend. Indians, perhaps because they are used to crowded public spaces, sometimes don’t realize that they may be standing too close to the next person.

Americans may have mastered the art of listening, but Indians? Only the most sophisticated and sensitive Indians have the patience to await their turn to speak. On campus, it is considered rude to interrupt a teacher, however relevant your point, without receiving permission to speak. Many Indian students learn this lesson only from experience.

Lifestyle problems on the university campus

Of course, you need more than friends and fresh air to survive, even on the beautiful campuses, and your favorite foods likely top your list of priorities. No surprise then that “desi” food is usually what Indian students in the US appear to miss the most.

The masala noodles and snacks they pack from home deplete quickly, and newcomers go looking for Indian restaurants sooner rather than later. They find good eateries and make Indian friends who can cook—vegetarians find the going a little tougher at the beginning.

In time, at least some of them manage to mix and match various dals, vegetables, and spices into eminently edible dishes.

But all this while, the heart is heavy with homesickness, despite the gadgets that bridge distances. Memorabilia work for some but worsens the longing in others. Food is the best medicine in these troubled times.

Money management is a major issue for all but those with well-heeled folks back home. Indian students habitually convert every price-tag from dollars to rupees. Some end up leading a more frugal lifestyle than they need to; there is the other extreme, too, of course.

But generally, budget constraints hamper the social lives of most Indian students, and hopes of keeping up with rich American or Chinese kids die a quick death. This, too, results in Indian students creating their own exclusive, but insular, social circle.

The eclectic American culture is also individualistic and direct, and it pays to appreciate every person for who he or she is. Simple gestures like saying “Hello!” and acknowledging the personality and presence of others don’t cost a buck but help make a wide and varied circle of friends and improve the campus experience.

If there is no committed effort to mingle with people from other cultural backgrounds, this opportunity is lost.

Indian students, most of whom have learned by rote to score in exams, take time to appreciate the differences between the Indian and the American systems of education.

As one student comments on another website, Indian students enter US campuses as excellent test-takers, but they need to become good researchers to succeed further. Making this transformation is not easy for a majority of Indian students arriving in the US.

The requirement to learn concepts and express this understanding is a major hurdle for Indian students who are used to spoon-feeding and learning “by heart.” The idea that the campus is a place to acquire knowledge and not just a stepping stone to a great-paying career and that teachers and libraries are resources in the pursuit of learning is lost on many students. Many realize late that only they themselves are responsible for their academic performance.

Respect for rules and regulations is learned the hard way in many cases. Unfortunately, the fact that plagiarism is a serious academic offence in the US is fully appreciated only after the first punishment.

Among other bitter lessons are that using information from other published material invites suspension, that verbatim reproduction from textbooks or teachers’ notes is plagiarism, unlike in India, and that “combined study” and shared project work are not encouraged.

Time management is a maddening problem for Indian students on US campuses. Many Indians are not used to punctuality in their own country, and schedules for classes and meetings are frequently disrespected. They take this habit to their U.S. universities, with unfavorable consequences.

The concept of time management is much discussed in India but often remains only on paper. Failure to manage time affects academic preparations because syllabi in US schools are designed to be absorbed over a period rather than in a feverish season of last-minute cramming.

Students who adopted a laidback approach while in India find it difficult to suddenly become systematic. Naturally, they are found wanting in assessments based on attendance, assignments, tests, quizzes, and the final examination that demand consistent diligence.

But, all said, most Indian students manage their early predicaments quite well. More than a few go on to excel in their fields, making their sponsors, their parents, happy, and setting an example for other students going West.

Many top universities have support systems in place. For instance, there’s an association of Indian students at MIT called Sangam. Use the resources such as these on the university campus, be aware of the cultural differences between Indian and American students, and you’ll do just fine.

Read these:
– Problems of international students in USA and how to tackle them
– Problems an average student can face in an elite MBA classroom

7 thoughts on “Cultural problems faced by Indian students in USA”