The popular quip goes, the product of any university is the undergraduate, byproduct is the Master student and waste product is the PhD student. But jokes aside, they are the scholarly pundits with the ultimate educational qualification any field has to offer. A qualification that comes at a cost. It is easy to pick PhDs out in a campus crowd. Tired, sleepy, disheveled geniuses with one singular forlorn look of will work for food. Justifiably so. A doctoral student, doctoral candidate, PhD student, PhD candidate, nearly free labor, lab fixture – are the different names for that single frame, the one that takes upwards of 5 years to hang.

For many, the decision to head for a PhD is a tough one. Many aren’t sure if a PhD is worth it. On the one hand you are an ardent lover of the subject and nothing can stop you from exploring it as an independent researcher, while on the other there are practical aspects you can’t just let go off – low stipend, lengthy duration and seemingly bleak job prospects.

It gets easier if you know what questions to ask, and there are many that we will explore in this article. But to sum them all up, there is one mother-of-all question that you need to research even before you get into research.

Is a PhD worth it?

Even in India, it is three times larger than the 1990s (data.gov.in). So there is a clear upward trend on the number of students choosing to get the penultimate of all qualifications. Let’s first explore why.

Why is there a rise in the number of Doctoral candidates?

Students who choose to get into a PhD program are usually highly motivated to become an expert in their chosen field. The doctoral program can provide you with a well structured and well funded path to pose a question, do the research, find something new and publish your work, on your name, proving that you have sufficient understanding of the subject. It is also the only known way to prepare yourself for an academic career, either as a full time researcher or teaching at an advanced educational level. But there are other factors, as well, that support the increasing interest in PhD enrollment in the US, and even in India. It is not necessarily true that all the factors will play a role in your decision to earn a doctorate. These are just observations that support the rise in scholars among us.

The years have been kind on basic and applied research funding at universities and colleges. Barring occasional dips, say war expenditures or economic recession, basic research spending has seen a generous increase from 700 some million dollars to about $35 billion, in the US, from 1953 to 2012 (adjusted to constant 2005 dollars). With the increasing budget, more PhD candidates provide a steady motivated work force to keep research going forward, thus promoting even more research investments. The funding is supported by not just federal agencies but also industries, investing in basic and applied research, towards technological advancements. With funding, students are able to find the right infrastructure to concentrate on developing their skills as a researcher. Read this story about a PhD candidate in Management who had a free ride, with stipend, for his PhD in Europe. 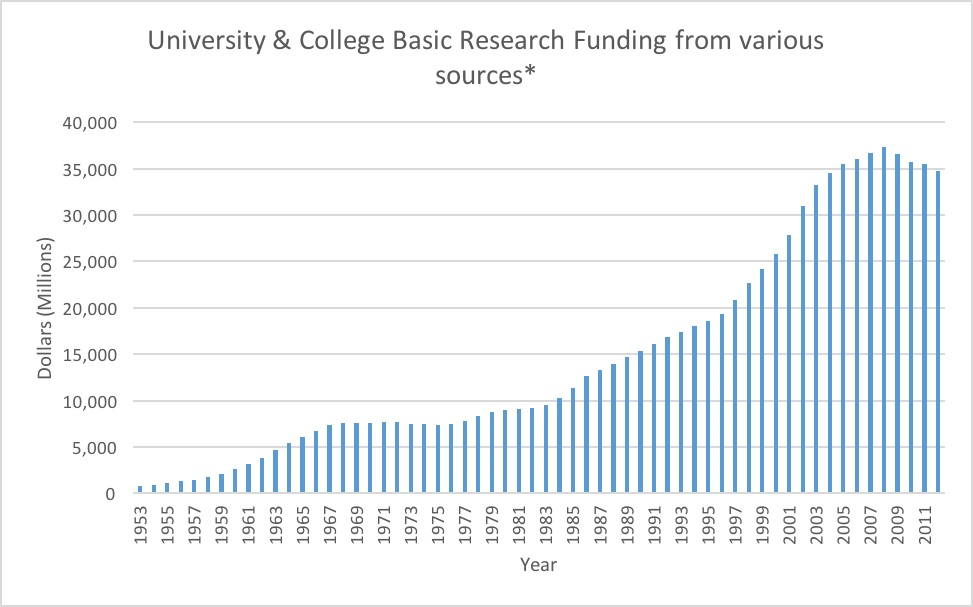 When the economy takes a hit due to recession, enrollment in college increases. It is actually quite counter intuitive. However, not only does the number of first time college goers increase, so does the number of students enrolling in graduate school for an advanced degree like PhD. The idea is that if jobs are slim pickings then one would rather increase their worthiness by getting a higher degree while the economic chaos settles at its own pace. The time taken for getting a PhD usually outruns the time taken for any slow economy to recover, at least by recent historical standards. And that is why, during the 2008- 2009 recession, the number of students grew from 2.4 million to 2.7 million (by 12%). Even without an economic catastrophe, getting into graduate school is a common way of deferring a job search or getting out of an unemployed existence. A low stipend is better than no salary at all.

Why not? They are smart. They are young, at least when they start off. They are eager. And they can work for food. Doctoral candidates are involved in teaching, grading and attending to the the undergraduate student population at a much lesser cost compared to an entry level professor. Therefore, universities actively encourage a large PhD population, promoting their research and thus garnering more grants for the system, and also reducing the requirement of full time teaching positions. With the undergraduate student body bringing in the hefty hefty tuition each year, having a low cost disposable teaching support makes for great ROI for universities. And the PhD students have no reason to complain with their institutes covering their degree costs and even paying them that allowance that affords them the cramped up graduate housing and instant noodles!

It takes a PhD to do…

And then there are jobs that only a PhD holder can perform. Pretty much any organization’s research and development head, and staff, are PhDs. Scientist and research jobs are also usually reserved for doctorates. So are academicians like professors. Even though you can technically get into an advanced level teaching position with a Masters degree, the chances of accompanied research work and the stiff competition from existing PhD candidates makes it a near impossibility. Almost all government universities and institutes require a PhD and sometimes even a few years of Post Doctoral work to even apply for entry level permanent professor jobs. PhDs also find themselves successfully pursuing non-academic careers in industry. Tech giants like Intel, IBM, Google, Microsoft hire PhDs who, thanks to their years of independent research and problem solving training, find themselves gaining faster pace at growth than their colleagues. 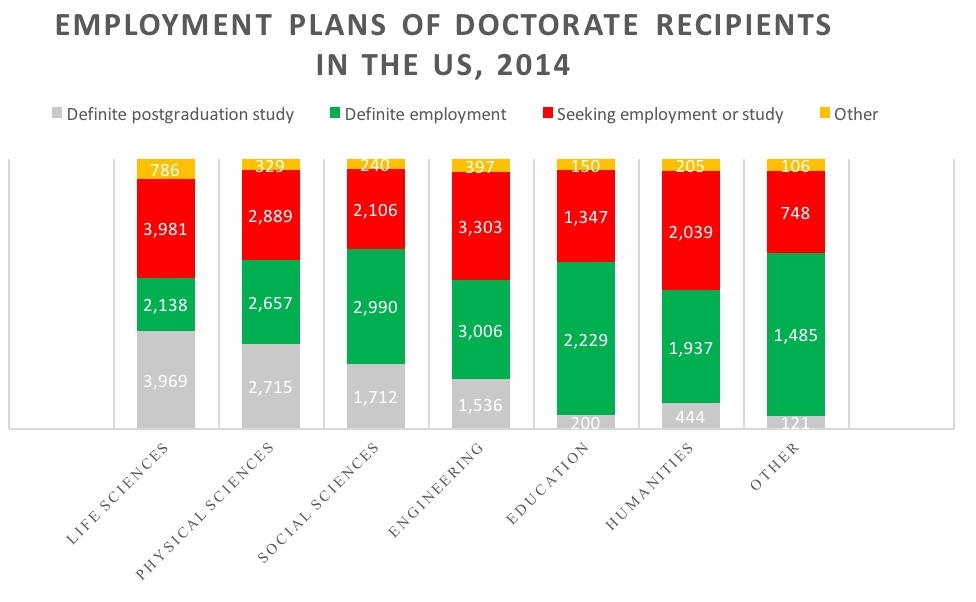 So there is a strong case to be made for getting into a doctoral program. But what about the warnings? What makes a PhD graduate program sometimes so unnecessarily grueling? Students often suffer from stress, disillusionment and lack of motivation along its course (Read How to Manage PhD Stress). Not to mention the lack of as much returns. Is it fair to commit to a program without knowing what your reality could be?

Reasons why a PhD may not be worth the effort

We don’t want to flush your dreams down the drain but it is always good to know the possible downsides before making a frivolous and impulsive decision to get into graduate school. A doctoral program needs dedication and a love for the subject to overwhelm the shortcomings. In health or sickness, till a degree do us part. Let’s see what you should know before saying I do!

Gains over a Masters degree only marginally high

PhD programs infamously take over half a decade to complete. If you were to simply focus on the financial gains of getting a PhD over an MS, which typically lasts 2 years or less, the justification for the added time begins to pale. For most majors, the median salaries, in the US, are comparable between the two levels. In some cases, like in Industrial Arts, it actually has a negative margin. So you study more to earn less. Incredible! But of course, this claim lacks the in depth study into region, specialization, university and skills that each individual student develops. The best way to evaluate the ROI of your PhD would be to talk to alumni, study the job prospects in your field and understand your future requirements. 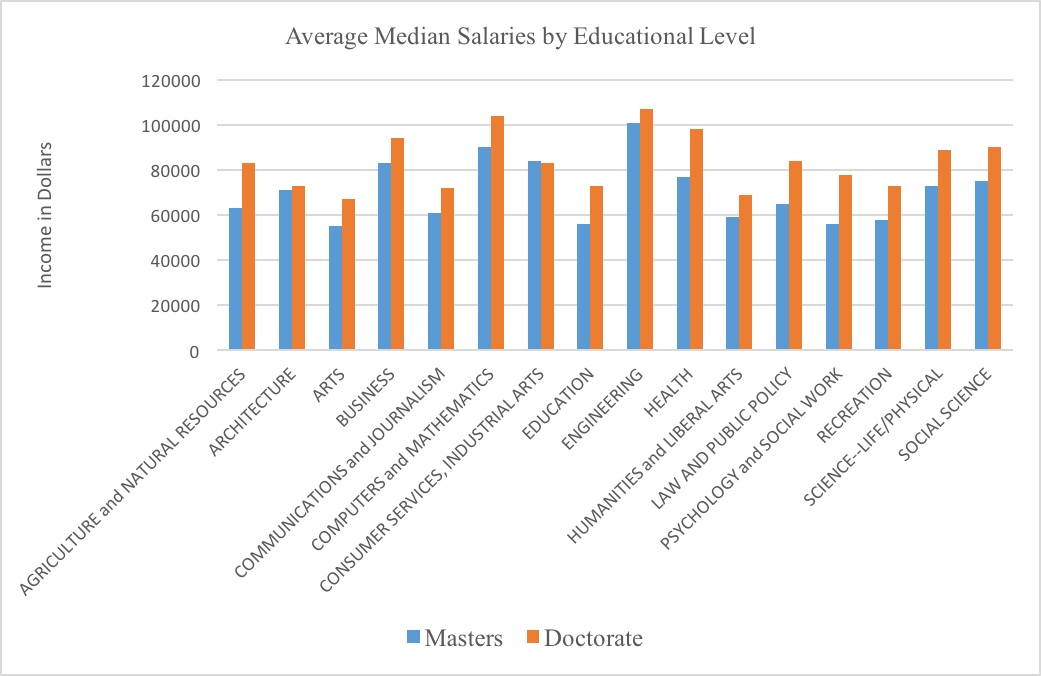 The reality of academic jobs

The situation with academic jobs in the US is worrisome. Based on NSF data from 2014, nearly 16,500 PhD degree holders were still seeking employment at the time of graduation (in the red). Nearly 11,000 were moving on to post doctoral jobs that are essentially contract positions with relatively low pay. The future of US PhD graduates landing academic faculty jobs is quite bleak according to a study published in Systems Research and Behavioral Science Journal, in 2014. For example, only 12.8% of engineering PhD graduates can expect a full time professor job. 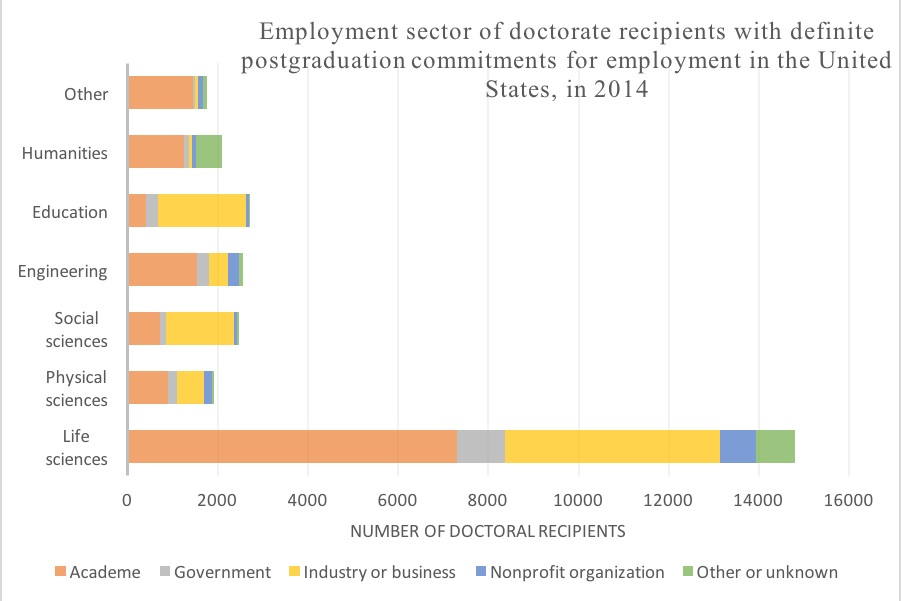 On the plus side, the scene in India is somewhat different. According to latest data from University Grants Commission, Central Universities have nearly 38% (or about 6,000) vacant faculty positions, waiting to be filled. But the reality here is that most universities have a rather lengthy and drawn application process, sometimes taking more than a year to fill a single position, if they advertise at all. On top of that, there are age caps (usually 35 years) to consider. So, unless you somehow have a genius gene and the favors of the constellations, to wrap up your PhD and enter the job market, you may only get to face a hiring committee a day before your 35th birthday!

According to a 2014 report by NSF.gov, it takes about a little over seven years to graduate with a PhD degree. So if you finished undergrad at 21, Masters at 23 and landed your graduate school letter of acceptance by 24, you will be well over 30 years old by the time you get to throw your convocation hat in the air. Unless you don’t mind your friends with the lesser degrees getting jobs, getting married, buying their first Honda, buying their second Beamer and putting down payments on the 1500 sq ft apartment, you should be just fine…And they are saying that 40 is the new 30, so you have at least ten years before you can buy the toaster! 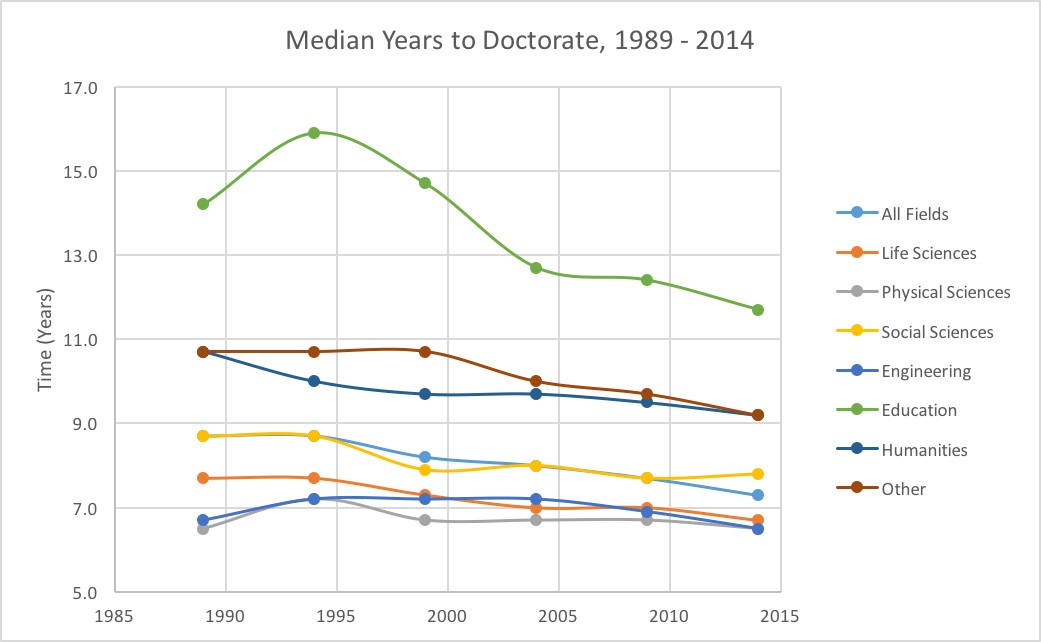 To conclude, clearly there are reasons to fret before you step into the doctoral shoes. But surely there must be other redeeming qualities of being a PhD, right? Well these are not measured, but simply gathered from experiences of present and past graduates. A doctorate degree still demands respect. People, more than anything, respect not just the intellect but also the tenacity that is required to pursue and tackle difficult problems to the end. It is probably why PhDs find themselves appreciated by employers in not just academia but even outside. So while it might be a rib tickler to think of them as university waste products, at least their talents can be recycled over and over again!

Author bio: Rakhi Acharyya is a Physics PhD from Michigan State University, an ex-teacher and a former employee of Corporate America.