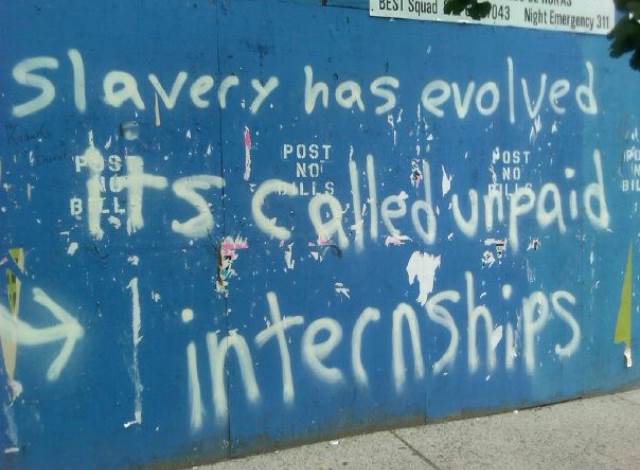 In the cold and competitive world of work, they are referred to as ‘modern slaves’, hapless interns who offer their services for free to companies gleefully saving money they should be spending on hiring full-time staff.

But if you’re a foreign student interning for free, read this carefully – you could risk being deported. That’s a double whammy, considering you’re probably working twice as hard compared to the full-time employee whose shoes you’re filling. But there’s no way around it; this one’s legally tricky.

Regardless of how companies read the rule book, the truth is, if your unpaid internship should be a paid internship under the law, you could be violating your immigration status.

Foreign students should be warned that the US Department of Labour recently brought internship programs under close scrutiny, to determine whether unpaid internships meet the definition of ‘volunteer work’, as they should, or whether companies are just trying to get off cheap.

Be warned: the circumstances under which an employer can use the services of interns or trainees without paying them are very limited and the criteria governing them very stringent.

However, when a company is caught on the wrong side of the law, the intern is regarded as a ‘victim’ if he or she is a US citizen. If you’re a foreign student, though, you could be deported.

More on the law here and here. In fact, the Department of Labor has provided a handy “primary beneficiary test” to determine whether a student or intern is indeed an employee, worthy of compensation, under the Fair Labor Standards Act. It is a set of conditions all, or some, of which need to be satisfied in order to determine the status of “compensation”. If the test reveals that the student, or intern, is an employee, then he/she is entitled to a minimum wage and overtime. Else not. And if your individual case satisfies an employee status, you cannot simply have an unpaid position as an intern.

Why an internship is important

An internship is meant to benefit both parties – companies can spot and nurture talent and benefit from fresh ideas and perspectives, while students gain valuable work experience, hone their skills and earn academic credits.

A short internship gives you an idea of the work you can expect in your area of expertise. This exposure is valuable in helping you choose your career path, at least in the initial stages of your career.

When the job profile is attractive, there is also the hope that you may be absorbed as a full-time employee, either now or at a later date. If not, there’s always the benefit of networking opportunities to be gained.

Given the obvious upside, college campuses and business schools help their students land short-term internships, which is exactly how it should be.

Somewhere down the line, things took a nasty twist for the intern, with companies spotting an opportunity to get the job done cheap, rather, at zero cost. Worse still, ‘intern’ is sometimes synonymous with ‘menial labour’, where the unfortunate intern is told to serve coffee or even pick up personal items from the laundry!

How an unpaid internship could harm your future career

Why would a student or a recent graduate put up with this abuse? The downturn in the economy hit industry hard and companies are strapped for cash to hire regular recruits.

As a consequence, interns are perceived as a free or cheap substitute for full-time staff. Of course, some companies that can afford to hire regular staff to get the job done are just downright stingy.

With unemployment rates high, young men and women are accepting unpaid internships because they believe that staying connected to the workforce is better than staying at home.

There’s another, more subtle, downside to the proliferation in unpaid internships: it blocks employment opportunities for experienced workers who could have held those positions.

In a job market that’s far from ideal, a recent survey brings even more depressing news for the beleaguered intern: 80 per cent of students surveyed said they expected to work as an intern or on a zero-hours contract.

Companies are simply responding to the law of supply and demand. If students desperately looking for work are willing to work for free, why would a company offer to pay them?

As if feeling exploited wasn’t bad enough, accepting an unpaid internship can be more demoralising than you imagined. It could even make you less employable and therefore harm your career prospects.

According to a recent survey conducted by the National Association of Colleges and Employers (NACE), 63.1 per cent of paid interns were offered a job after graduation, while only 37 per cent of unpaid interns landed one, compared to 35 per cent who had no internship experience.

Companies appear to perceive paid interns as an asset while they view unpaid interns as unworthy of hiring. That could turn into a vicious cycle, actually damaging the morale of those who have little choice but to intern for free, a terribly undesirable circumstance that probably has more to do with the health of the economy, luck and the connections one has rather than lack of talent or skills.

And just when you thought it couldn’t get worse, it does. According to the NACE survey, paid interns earned higher salaries after they landed full-time positions vis-à-vis their unpaid counterparts.

Although there is probably some truth to these findings, these results may be a little skewed as paid internships are usually found in higher-paying industries such as engineering, science and finance, while unpaid internships are more prevalent in lower-paying fields such as fashion and communications.