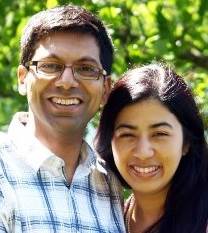 Now that the protagonist and the university have been introduced, we move out of the picture and let Neeraj narrate his story. It starts off from the scenic valleys of Darjeeling and moves to the picturesque locales in Cambridge. But not before tackling the challenges of multiple GMAT attempts, multiple applications and an unconventional profile that Admission Officers at the top bschools aren’t used to evaluating.

2005 was one of the most happy and eventful years of my life. My wife and I had been blessed with our second daughter and I had received an admission offer from Judge Business School, University of Cambridge. If even a year earlier somebody had said to me that one day I would be studying at the University of Cambridge, I would have wondered if this person was on drugs. So how did this come about and what are the hurdles I overcame in my journey?

Let me take you back a bit to the year 1995. At that time, I was a recent Science graduate, with a diploma in computers and a job with a small IT consultancy in Kolkata. While I quite enjoyed coding, I got bitten by the entrepreneurial bug. I realised that there was a gap in the market for IT education in smaller towns. So I quit my job, took up a franchise of India’s leading IT education company and set up a training centre in my hometown of Darjeeling.

Over the next few years, the business grew and flourished as we spread to other towns, became master franchisors and also established contracts with various schools for delivering complete turnkey IT learning solutions. So far so good, but then in 2001 we started to feel the effects of the slowdown in the IT industry. We subsequently had to shut down some of our centres.

During the next couple of years the business went through interesting times, but we reinvented ourselves and managed to emerge with minimum damage. It was a great learning experience, but somehow it also got me thinking about my journey so far – achievements, failures, knowledge-gaps, experiences and career aspirations. I had run the business for about 7-8 years by then, achieved quite a lot and had been through a steep learning curve.

But after all those years, I had started to feel a bit stagnated. I now wanted to jump to the next level, learn about globally competitive high growth businesses and seek new challenges. However there were some significant gaps in my knowledge and skills which needed to be filled before I could embark on to the next phase of my career. What better way to fill that than an MBA.

Coincidentally, I met a friend who had secured admission at ISB which was an upcoming business school then. I got excited about the fact that unlike the traditional b-schools in India which attracted mostly fresh graduates and required two years, ISB catered to people with work experience and the course could be completed in only a year. This met my needs perfectly, and so began my MBA journey.

My first hurdle was to find the time, commitment and support required to prepare for GMAT. It had been almost a decade since I had last written a test. I was juggling between work and family (my elder daughter was just around 3 while my wife was pursuing a full-time masters degree at the university). To top it all I was based in a town where I struggled to find people who had even heard about GMAT, let alone support me or guide me.

Nevertheless, I took the plunge! I got some tips from the ISB friend, joined a few online forums, bought some guidebooks, burnt the midnight oil and took the test. My first attempt didn’t quite meet my aspirations. But not the one to give up, I worked on the areas that needed improvement, retook the test and got a score which would be considered average by many top schools. However I wanted to maximise my chances, took the test for the third time and finally got a score of 690 which I thought was acceptable, though still a bit short of my target.

My next hurdle was putting together the application and writing all those admission essays. Being a stereotypical Indian who was strong on quants but had limited writing abilities, the thought of producing top quality essays was a bit unnerving. I started by seeking out and going through essays of people who had already secured admission, to get some ideas and directions. I then started writing my own essays.

Sadly there was no MBA Crystal Ball then to help but I was lucky to have a wife who is an excellent writer and a poet. She offered to edit my essays for language and grammar. However, I still needed some feedback on overall content and presentation. I reached out to my ISB friend who offered to help. I was finally able to put together an application that I was happy with.

My efforts resulted in an interview call from ISB but I failed to convert it into an admission offer. I felt dejected, but my persistence kicked in yet again. I picked myself back, analysed my shortcomings and reasons for failure. I realised that having been an entrepreneur I didn’t have enough experience of being on the other side of the interview table.

Fortunately interviewing is a skill that can be developed through preparation and practice. I also felt the need to be crystal clear on my post MBA plans and do more research on the kind of jobs that I could secure after my MBA. This, in my opinion is of particular importance to Indian b-schools where a lot of weight is given to the candidate’s post MBA employment prospects.

I started working on all of these areas and on improving my interviewing skills. I also decided to cast the net a bit wider this time as putting all my eggs into one basket and applying to only one b-school had been one of my biggest follies.

The following year I included the National University of Singapore (NUS MBA), Nanyang (NTU), HKUST (Hong Kong), Melbourne Business School (MBS) and Queensland University of Technology (QUT) to my list of b-schools to start with. This time, other than HKUST, I had admission offers from all the rest with a scholarship offer from NTU and QUT.

This hugely boosted my confidence and I now started to think beyond Australasia. US was quickly eliminated as most American b-schools ask for a four years degree after high school, which means that if you’re applying from India you’ve got to be either an engineer, doctor, a masters degree holder or somehow plug that gap if you’re a simple college graduate.

Moreover US MBA programmes take two years to complete. UK therefore seemed to be a better choice for me, where the schools did not have any qualms about my 2-year bachelor’s degree (the 2-year format was offered by universities in West Bengal and other states, it’s discontinued now), offered a one year MBA and the average age and work experience was higher and close to my own. I applied to Cranfield and Cambridge and received admission offers from both. After a lot of deliberation I chose Cambridge.

I didn’t regret my decision the slightest bit. I had one of the best times of my life in Cambridge. The MBA programme was enjoyable, invigorating, thought provoking, collaborative and busy. I learnt as much from my classmates and project teams as I did from my lecturers.

However one key word of advice for Indian MBA aspirants is that unlike the b-schools back home where campus placements are a norm, in UK and Europe one needs to take the responsibility for ones job search and future career prospects.

I networked vigorously while doing my MBA, volunteered to be a facilitator at the Centre for Entrepreneurial Learning summer school and through that link found my first job as Business Advisor at the Scottish Institute for Enterprise, mentoring student-led start-ups.

I subsequently moved to the UK India Business Council facilitating bilateral trade and investment between the two countries and also had a stint at UK Trade and Investment. I am now building my own business called Tea People, which is a social enterprise that aims to use tea as a medium for social change.

My advice to Indian MBA aspirants is to do your research, make sure you are clear on your goals and if you feel that an MBA is really the best solution for you then put in your 100%. Take expert advice and guidance where available. And finally be persistent and don’t be scared of thinking big. If I could do it, so can you. All the best!

Apart from highlighting the importance of persistence and self-belief, this story also has a lesson for MBA consultants. The biggest threat that the fledgling MBA admission consulting industry faces today is not from internal competition, but from super-talented wives of MBA applicants. (Vishaka-ji pranaam…and kudos to you!)
Got questions about the University of Cambridge MBA program at the Judge Business school? Average GMAT, class profile, scholarships, placement statistics, MBA rankings. Post them in the comments below for Neeraj.

Also read:
– How to get into Cambridge University
– MBA after MBBS, at Cambridge Judge, with scholarship, despite low GMAT