Teach for India jobs through various NGO partners on the ground can provide an excellent exposure to the education sector for high-potential professionals.

Saloni Gupta might remind you of the naughtiest girl in your school who always got away scot-free because of her innocent looks. Several years after completing her undergrad, she was planning to become a full-time student once again. But destiny had other plans for her. Rather than being an MBA student at one of the top bschools, she transitioned to the other side to become a teacher. Her life changed when she got the following email from Teach for India:

“Congratulations on your acceptance into this selective Fellowship, offered to less than 10% of our applicants—an acceptance rate that is at par with leading institutions like Harvard’s Kennedy School of Government, The Wharton School of Business and INSEAD. This makes you one of the top leaders in the quest for educational equity for the nation.”

Now she’s a teacher, a mentor and a loving didi to a bunch of energetic kids eager to get the basic education that’ll help them become independent, knowledgeable and productive members of the society.

Teach for India vs MBA 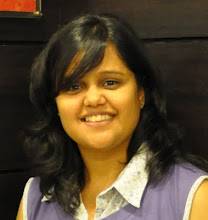 Almost five years ago, I started a career in software industry. I was a darling of my team members – helped, trained and supported at every step. Within one year, I rose to become an important and critical employee for the team and the company. After one year, my team got shifted to Bangalore and I began a new era of my life far from proximity of parents, relatives and friends in Delhi. I chose to stay alone and set up a good home for myself.

I worked really hard at work, staying at top of the game all the time, grabbing every important project and delivering it seamlessly. I worked really hard at home as well as took care of my fitness, food and bills without fail. It became an important time of my life because I was responsible for only myself and I could blame no one else for messing up. I was clearly pursuing excellence in my work and within myself. And that is why I wanted to achieve excellence in direction of my career as well.

Despite a supporting team and an encouraging boss, I saw through the work that I was doing. The work wasn’t that important and I knew that my whole life is not meant for it. I was getting job offers which would pay me 60% more right away even during tough times in economy but nothing as such was luring me other than an innate desire that I wanted to be producer of the world and not just the consumer of the best job, good salary and a beautiful home.

I started getting inclined towards non-profit work, furiously researched on internet and zeroed-in on microfinance as one of the developing industries that served a lot of people in a sustainable way. I started volunteering with Child Rights and You (CRY) and worked in and around aanganwadi for a while. I found myself far more useful and meaningful as a volunteer and I hoped that I can also be one of the movers of the world some day. It was a sheer innocence of a hard-working girl who thought serving the society is morally the right thing to do.

I started figuring out ways that can make me transition in that industry but any job that I found interesting required prior experience and I was left with options that required losing my financial stability and starting from scratch. I was not ready for it at that time. Meanwhile, I appeared for GMAT considering MBA as one of the options to make a career transition without huge risks of financial stability and with a future that promises a job that could lead me to higher degree of impact. MBA became a hope and a channel for my ambitions.

While I appeared for GMAT in July 2009, I did not apply in that admission cycle because I wanted to figure out if that is the only thing that I can do and whether it will lead me where I wanted to be. One year passed and I still saw only one road so I decided to walk on it. I applied to few schools and got particularly interested in Tuck because it had a fellowship in microfinance. Tuck called me for an interview which I messed up badly and I knew that I won’t make it through.

This was the time when I boarded a train that travels 9000 km throughout India stopping at destinations where you get to meet social entrepreneurs across the country. This Yatra (journey) came at the right time and forced me to reconsider my decision to join a business school. I met people who thought like me but unlike me were courageous enough to start from scratch. I had applied and was selected in Teach for India that time but was keeping it as a second priority until then. During the Yatra, I figured out that I have the right outcome in front of me. I have got an opportunity that is great for career transition without costing like an MBA that may take a toll on my career choice after two years.

So, I joined Teach for India in the month of May instead of a business school. I started teaching in a low income school and I discovered that of all the jobs in the world, a job of a social worker is the most selfish one. I was giving because I wanted to give. I was improving living conditions of people around me because I wanted to do that. I was imparting education because I wanted kids to learn. I figured out one great secret about myself that I am really selfish and because of that I took ownership, reflected strongly and gave results. I also figured out that by being selfish, I am going to be alone on this path many times.

This last one year has changed me to the core. I have got to know the difference between knowing the path and walking through it. I have known now how much toll it takes to be a producer and what it means to lose your comfort zone. Have I regretted it? Not even once. Am I happy? Like I have never been before. Am I still going to pursue being a producer? Yes. Of Course.

Saloni’s friends might be busy learning about discounted cash flows, marketing frameworks and strategy case studies in the best Ivy league MBA programs. But the Teach for India classroom has given Saloni an education that no business school could’ve provided. Check out her blog (Mukaam) for more stories.

If you have queries about the Teach for India program, or related options, post your queries as a comment. We’ll try to get Saloni back to answer them, if her 38 demanding kids are willing to let their didi go for a few minutes.

27 thoughts on “Teach for India: NGO Education jobs or MBA”